Nothing is certain when it comes to sports betting in Florida, except the Seminole Tribe

NO online gambling seems a lock for FLA in 2021

Beyond death and taxes, the surest thing for mankind was that all plans for the future of Florida gambling would have to go through the Native American Seminole Tribe, who have dominated gaming within the state for many years. Tuesday's 97-17 ruling in the Florida House to launch sports wagering helped confirm that, including stipulation that the Seminoles would be in charge within the new updated rules.

The boldest headline in the story is the deal predicted to bring $500 million a year in annual revenue for the state, with sports betting estimated to make up roughly $50 million of that total.

But don't place your plans just yet Florida sports bettors. Although it is a significant step toward potential reality, there are some Olympic high hurdles to cross before receiving any anticipated Federal approval. And many of the sharpest arrows begin thrown against the deal reside right within the state itself. 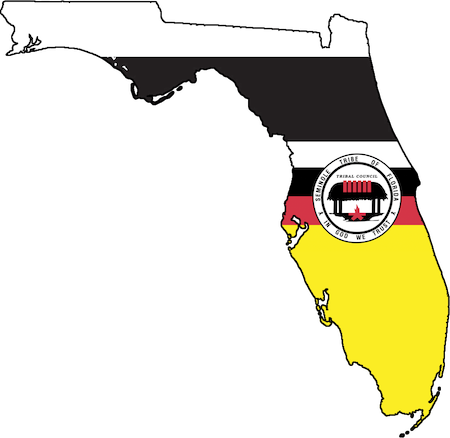 Unlike most other U.S. states, the issues involving any smooth transition toward licensed and regulated sports betting in Florida are much more plentiful and politically charged. They involve standing laws, anti-gaming groups and individual wagering sites that feel they are being shortchanged within the new deal.

But most obvious is the overriding issue that the Seminoles, abetted by the willful cooperation of Florida Governor Ron DeSantis, will be handed a virtual monopoly to operate both sports and casino gambling throughout the state.

At the heart of the headlines we will be seeing in the coming months involving those fighting to kill sports wagering (and expanded casino gambling) for Florida is explaining Amendment 3. Reviewing the basis for either approving or denying Florida's latest legislative approval, the Federal government will have to deeply analyze and explain their reasoning, while taking this law into consideration.

In 2018 Amendment 3 received about 70 percent approval vote and was proposed by Voters in Charge — a political committee largely financed by the Seminole Tribe and Disney. The committee spent more than $31 million on the effort, while using voters' distrust and special interests to build support for the ballot question.

The amendment gave Florida voters the power to expand gambling, but it actually made the process more difficult. Changing anything by voter decision is a long, arduous process. The upside was it would keep competition low for the Seminoles and also ensure a more "family friendly" tourism environment in the state, to Disney's benefit.

At that time, losing opponents to Amendment 3, which included NFL teams, online betting sites like FanDuel and DraftKings, plus the Florida dog and horse tracks, stated that it is was unclear what effect the initiative would have on their potential future.

As it has turned out in the current legislative plans anchored by Gov. DeSantis, their fears might have been justly realized.

Voices of the People

We also cannot count out the potential power of political advocacy groups in Florida figuring into the mix. They have opportunity to at least delay sports gambling and additional casino gambling within the state.  Although they hold similar odds to Rocky against Apollo Creed, these advocacy groups have been undaunted trying to get their voices heard.

Most well-known is No Casinos, a Florida based advocacy group that has consistently lobbied against gaming led by their President, John Sowinski. He strongly feels legally that Florida voters have the right to vote on the compact as an expansion of gambling.

They also feel that sports betting is not definitively mentioned in Amendment 3 and was not a game offered within the language of the 2018 voter amendment, so therefore it should not be included moving ahead. In the longshot possibility that the Federal government agrees, another vote including sports wagering within new language would not occur until 2022, delaying any potential for legalizing sports betting in Florida until at least 2023.

A major force centered in on the worry are Florida's long-standing thoroughbred racetracks. The net result of the new plan will mean more competition for the largest tracks, Gulfstream Park in Hallandale Beach (near Miami) and Tampa Bay Downs in Oldsmar. Horseman fear the new pact will lead to both lower purse money and a necessary reduction of racing days, according to Stephen Screnci, President of the Florida Horseman's Benevolent and Protective Association.

The "de-coupling bill" as part of the 30-year compact agreement between Gov. DeSantis and the Seminoles will provide the Seminoles with a virtual monopoly on both sports betting while permitting an addition of up to three new casinos on the land within their existing Hard Rock Hotel & Casino in Hollywood, FL. That site is within 10 miles of Gulfstream Park.

Another likely victim of the new deal in South Florida is nearby Pompano Park, the state's remaining harness racetrack. It is currently known as the Isle Casino Pompano, operated by Caesars Entertainment. A last-minute bid to exempt harness racing and Pompano Park was withdrawn by the Senate in a 39-0 vote and the House in a 73-49 vote.  It's almost a lock now that harness racing will be in its final season with plans for the property's future now in question.

The most serious issue in doubt and obviously the most lucrative one involving both the Seminole Tribe and revenue potential for state of Florida involves online wagering. All research forecasts, including both sports betting and casino wagering, reflect Florida bypassing New Jersey and Pennsylvania as the U.S. #1 market for online wagering.

Critics say the deal fundamentally violates a Federal law named the Indian Gaming Regulatory Act or IGRA. In that statute all tribal gaming must occur on Native American sovereign property only. Within that is a legal debate that asks: do bets that are placed remotely (online anywhere throughout Florida), but processed through servers on Native American soil (Seminole properties), count as tribal land?

In all, it was heard the tribe was targeting October 1st to offer extended casino games, like roulette and craps, along with blackjack, at their seven casino facilities across Florida. Included among them are their flagship Hard Rock Casino Hotels in Tampa and Hollywood.

Predicting a Federal approval for at least "onsite" sports wagering would be the best short-term opportunity for these properties, with all other designated retail locations to conduct sports betting. The question involving iGaming and online wagering is much more diverse and in doubt within the court system.

Finally, it has been rumored that the famed Trump National Doral golf resort and the Fountainbeau Miami Beach, have both been named as potential new casino locations. However, Florida lawmakers have said they would have to first gain independent approval from the legislature.

Whatever happens between now and the kickoff of the upcoming football season involving sports wagering in Florida is anybody's guess. Good news is that lines are currently up for Florida bettors at the top online sportsbooks. Sneaking a peak at the BetOnline NCAA Football Championship futures, the Florida St. Seminoles are +6600 to win it all.