Successful sports handicapping professional Ross Benjamin discusses the topic of bad beats as they apply to sports betting. Ross specifically uses the NFL Week 8 game between Los Angeles and Green Bay as a prime example of such.

A short memory is required to bet on NFL football

When it comes to NFL betting, there always seems to be a bad beat or two occurring weekly. The kind of ones that awaken all sports betting conspiracy theorists, and others who proclaim themselves as eternally cursed. Contrarily, some can be elated by some of these fortunate outcomes, only to soon to be forgotten when being on the other side of future bad beat instances.

One thing is for certain, we always seem to remember the bad beats, and quickly forget when auspicious breaks fall our way. Having selective memory can be counterproductive in successfully staying on an even keel which is paramount for remaining focused.

My favorite analogy regarding this topic is that of a doctor who just had one of his patients die while under his or her care. If those doctors are emotionally affected when such negative situations arise, it’s bound to cloud their judgement when moving on to the next patient. Hence, increasing their chances of making bad decisions. The same can be said for a sports bettor after a bad beat. If they don’t allow their emotions to quickly subside, it most likely will promote irrational thought or a subsequent reckless choice.

NFL Week 8 Bad Beat: Green Bay Packers vs. Los Angeles Rams
According to NFL odds, those who wagered on the Rams against Green Bay on Sunday did so with them being a favorite of anywhere from 7.5 to 8.5-points. If a Rams backer just caught the final score without knowing anything else that transpired, then it spared them additional anguish beyond their losing wager. 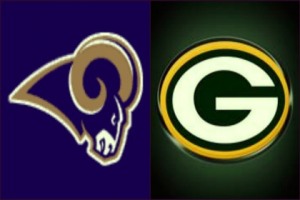 With Los Angeles leading 29-27 with less than 2 minutes to left, they faced a 3rd down and short from the Packers 25 yard-line. Green Bay had just used its last timeout following the preceding 2nd down play. Basically, if the Rams were able gain 1st down yardage it would clinch a victory barring something bizarre. What occurred next would’ve created extreme anxiety to NFL bettors who’ve been deceased for a decade, let alone those alive with action riding on this contest.

The ball was handed off to star Rams running back Todd Gurley on that crucial 3rd down play, and he broke through the Packers 8-man front while seemingly being on his way to scoring an easy touchdown. However, Gurley pulled up at the Green Bay 5-yard line, and then allowed himself to be tackled in bounds. Thus, keeping the clock ticking away, and with Green Bay out of timeouts, it was all over but for that of a couple of kneel-downs by Rams quarterback Jared Goff. It just doesn’t get much tougher than to lose a game in this manner. After all, if Gurley was selfish and ran in for a touchdown, the Rams would be up by 8 points, and with a successful extra point try, it would increase the lead to 9. With a little over a minute to play, and Green Bay unable to stop the clock with no timeouts left, Rams bettors would’ve had 100% chance of beating the pointspread.

What Ifs
It would positively be fair to ask this question after sustaining such a tormenting against the spread losing bet. How many running backs would have the presence of mind and display a team-first mentality that Gurley exhibited? We’ll never know the exact answer to that question. Nevertheless, I’ll go out on a limb in saying that most players would have chosen a path of individual accomplishment, and many NFL bettors would’ve greatly appreciated the self-absorbed behavior with their own personal gain being at stake.

Regarding NFL betting results, a short memory and controlled emotions are very valuable assets to possess.