First PASPA, now the NCAA: A look at the Supreme Court and Sports in the U.S.

The Supreme Court is deciding another huge case that concerns sports in the U.S. and Glenn looks at the reversal of PASPA and the latest anti-trust case though the same prism.

While March Madness makes its way, a new kind of madness is taking place and it's not on the hardwood courts. It is happening within the U.S. Supreme Court in Washington, D.C., where the justices heard compelling arguments whether the NCAA limits on compensation for student athletes violate the nation's anti-trust laws.

The player athletes contend that the NCAA operates a system that is an illegal restraint of competition in violation of the federal laws which bar price fixing in markets, including the labor market.

Not going to get too into picking sides here because many believe thousands of dollars of free scholarship education at excellent universities is payment enough for their time away from class. And for the select, an opportunity to perhaps create a future to make millions of dollars, and so on . . .

However, there isn't much doubt that NCAA college sports is a mega-big business. Just for the Men’s Basketball Tournament the NCAA earns a whopping $1.1 billion each year.

The plaintiffs are containing that the anti-trust law allows them to restrict certain limits on athlete compensation to preserve what they hold to as some kind of sacred protection in the name of 'amateurism'.  In other words, that is what separates the game (and the students) from being professionals.

The NCAA also believes what makes the college game so attractive to fans and retain its purity is that there is no compensation nor pay for play.

All this publicity involving the Supreme Court getting involved in the sports world harkens back to the last time they were called upon to make a big decision. And that as it turned out, has made a much bigger impact on everyone's betting, and watching sports lives.

That refers to May 18, 2018 and the repeal of PASPA (the Professional and Amateur Sports Protection Act of 1992). Also known as 'Independence Day' for many, creating a multi-billion-dollar world of opportunity, way beyond what was forecasted that day and nearly three years in, it appears only to be beginning.

For if not for that fatefully narrow close 6-3 decision by the Supreme Court that day, we would not be seeing every other commercial be for DraftKings and FanDuel today, ESPN creating new wagering shows, VSiN and Jamie Foxx being paid millions to tout that BetMGM is the "King of Sportsbooks". You get the idea.

The most fascinating prop bet we'll never see is IF they had the opportunity to vote again, knowing the monolith U.S. regulated wagering would quickly become and is still rapidly becoming, would the Supreme Court still vote "Yes" for repealing PASPA?

Quite interesting is that the two biggest proponents against U.S. legalized sports betting and online gambling as well passed away over the past year.

Ruth Ginsburg, legendary queen of equality was vehemently opposed to more legalized wagering and urged other Supreme Court justices in voting No. She was joined by fellow female Justice Sonia Sotomayor and said "there is no reason for the court to take a wrecking ball to PASPA in its entirety."  Justice Ginsburg added:

"When a statute reveals a constitutional flaw, the court ordinarily engages in a salvage rather than demolition operation. It limits the solution to severing any problematic portions while leaving the remainder intact." 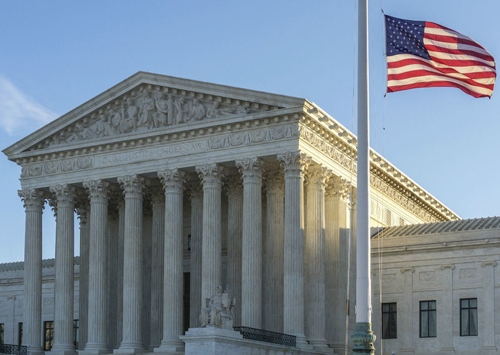 I am wondering but will never know if Justice Sotomayor has this on her mind when considering this week’s issue of paying students to play ball. Can she be thinking a few bucks next year, but what will the market be for top college quarterbacks coming to Alabama or Notre Dame in the future?

Pressed for a comment this week about the college sports payment decision Justice Sotomayor said, "How do we know that we are not just destroying the game as it exists?" That eerily sounds like she was quoting Justice Ginsburg about PASPA. A clue to her conservative thinking on this issue and a possible vote for the NCAA.

What Would Sheldon Think?

The other well-known figure who railed against PASPA was billionaire Sheldon Adelson, who died in January. The CEO of the Las Vegas Sands Corporation and President Trump's largest campaign contributor was also the primary lobbyist to fight online wagering and licensed and regulated sports wagering for states in the U.S. The millions of dollars he spent were instrumental in delaying PASPA being reversed in the highest court for several years.

It is quite ironic that now that he is deceased, a new regime in the LV Sands Corp. is planning to sell their prime U.S. investments, including the Venetian and Palazzo Resort in Las Vegas, to potentially pursue other domestic online gaming ventures. Especially, targeting the giant opportunity market of Texas, where the company maintains several political connections.

While still conceding reversing PASPA was a huge mistake, if he were alive, I am reasonably sure that Adelson would prioritize the fertile chance to compete with Caesars, MGM, Bally's, and the rest to pursue both online gambling and sports betting for the U.S.  After all, business is business.

"Pay for Play" the Favorite

Although PASPA was quite a contentious and difficult decision for the court, and one they possibly regret, paying student athletes may be an easier one if early comments are an indication.

Justice Brett Kavanaugh said his "overarching concern" is that the sports organization is using the cover of anti-trust law to exploit students. He strongly added "it seems as though schools are conspiring with competitors to pay no salaries to the workers who are making the schools billions of dollars on the theory that consumers want the schools to pay their workers nothing."

"All of sudden, the whole thing comes crashing down."

In his opinion Thomas noted that most NCAA coaches make millions of dollars and enjoy substantial extra benefits.  He said, "It just strikes me as odd that the coaches' salaries have ballooned."

On the other side, Chief Justice John Roberts, appeared the most sympathetic to the NCAA's arguments. He compared the situation to a game of Jenga, where each block is one of the restrictions.

Roberts said "You pull out one log and another and everything's fine. But if courts overturned enough of the NCAA's policies, the competitions would no longer really be amateur. All of sudden, the whole thing comes crashing down."

All told, although Presidents nominate Supreme Court justices to be the fairest and most impartial source of equal justice in the nation, it is naïve to believe they are not human and subject to their own prejudices and personal opinions.

The ones that were around to vote on PASPA have to be a bit prejudiced looking at what has occurred in the U.S. just since May 18, 2018.  If "pay for play" turns out to explode like legalized sports wagering has, I suppose guys like Trevor Lawrence might be student millionaires even before they head to Draft Day.

It will take a while to potentially find out. A finalized vote on the decision is not expected until sometime in June.