Can MLB now afford some 'integrity' and allow Pete Rose into the Hall of Fame?

Now that MLB has announced their desire to get a piece of the sports betting pie, shouldn't they revisit the lifetime ban of Pete Rose?

With MLB demanding an “integrity fee” for U.S. legalized gambling, perhaps a pardon due for #14

Just when you thought it was the bottom of the ninth, down ten runs, per Pete Rose’s chances for the MLB Hall of Fame.  Who knows, this ball game might go into extra innings courtesy of U.S. legalized sports wagering and a fateful decision from the Supreme Court of the United States.

No, Charlie Hustle’s case is not at all directly tied into the upcoming PASPA (the Professional and Amateur Sports Protection Act of 1992) appeal hearing.  But his three-decade Cooperstown appeal could certainly be potentially affected.  Let’s submit the newest evidence from both sides, your honor:

The NBA and its commissioner Adam Silver pioneered the concept of an “integrity fee” due the league for casinos promoting its play as a rightful entertainment tax.  More important bearing the cost of extra certainty that all its games will be fair and proven without any bias should the U.S. legalize sports wagering by repealing PASPA in any form.  The word integrity has since been diluted to potentially being named a “royalty” fee, while we anticipate the SCOTUS decision.

Joining the NBA next was Major League Baseball and its commissioner Rob Manfred adopting a very similar posture.  The only difference has been the visibility of MLB in taking media questions about the subject while the NBA has been much more aggressive approaching their support for legalized wagering.

The NHL remains icy (no pun intended) on the subject taking neither side while the NFL still does not endorse any PASPA repeal for legalized wagering.  Recently the PGA has come forward to say they positively agree for U.S. legalized sports wagering.

The Players Enter the Game

Not surprisingly, the players union from the four major U.S. sports leagues have bonded together to voice their intent to demand their fair share in receiving a cut from any decision upon pending U.S. legalized gaming legislation involving federal or state action.  How this will be interpreted legally will be a very gray issue while we wait upon the SCOTUS pending decision.

Unlike the NBA and Major League Baseball, the players unions haven’t put any specific figure toward their request, but have voiced a definite intention that they must be involved.

Overall, the message to the public is that for each legal dollar wagered on sports, both the leagues and its players will be taking a share (or a tax) as a mandatory fee.  How those funds will be distributed and how they will best benefit the public toward the “integrity” of the game itself will no doubt be a hotly debated and contested issue.

The Case for Pete

Which brings up to Pete and his seemingly endless, lifelong journey to enter the Hall of Fame.

According to his negotiated agreement with MLB many years ago, his admission to betting on baseball while being manager of the Cincinnati Reds permitted many courtesy arrangements to stay involved within the game.  However, a firmly stated lifetime exclusion from the MLB Hall of Fame was part of the deal.  Many subsequent appeals have been denied. 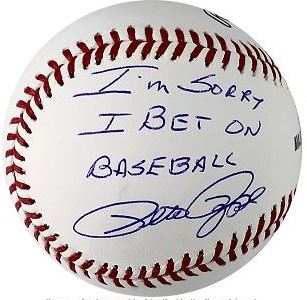 Rose’s entire life story outside of baseball has been more been bizarre and mysterious than Jimmy Hoffa’s disappearance.  He has even tried to sue special prosecutor John O’Dowd, who originally was hired to investigate him for illegal sports betting. In a 2015 ESPN interview, O’Dowd claimed that not only did he bet illegally but was involved in statutory rape of two underage girls.  Rose sued O’Dowd charging that it limited endorsement deal opportunities. The charges have since been dropped.

Involving the key word of “integrity”, Pete Rose has always proudly stated and point out that he has never bet AGAINST his own team.  Of course, scoreboard watching betting other MLB games plus other potential addictive habits could be pointed out as less punishable crimes lacking integrity.  Especially when you are paid to be managing a major league baseball team.

But, the main question is IF baseball will now be receiving revenue from U.S. bettors for its games, is it entirely hypocritical to lifetime punish one of its greatest players?  How can Major League Baseball endorse legalized wagering, accrue funding and forever banish the “hit king”?

Should the SCOTUS appeal PASPA, do not be surprised if Pete schedules another private meeting with Commissioner Manfred to take his last swings here.  Here’s the problem . . .

Just last week a TMZ report shed some new light on his current activities and how Rose has been making a living for quite a while. According to TMZ, his divorced wife Carol claims that Pete makes at least $100,000 a month signing autographs and making personal appearances.  She goes further to claim her husband, is a “degenerate” high-stakes gambler, owes a significant amount of money to casinos and the IRS.  Almost forgotten is that he pleaded guilty to two counts of tax evasion back in 1990.

Though Carol claims that Pete is bringing in over a million dollars a year, she also says that he spends most of his money gambling. Rose currently lives in Las Vegas, which is where he centralizes most of his autograph signings and appearances.

Perhaps the most bizarre part of TMZ’s report is that Rose is still married. He and Carol wed in 1984, and though he filed for divorce in 2011, the divorce was never allegedly completed. She is asking the court to compel Pete to reveal the full details of his finances, so a proper settlement can be reached, and the divorce completely finalized. Rose, now 77 years old, has been involved with 38-year-old former Playboy model Kiana Kim for several years. Rose and Kim have participated in a reality show together called “Hits & Mrs.”

Adding this all up has nothing to with his next appeal case into the Baseball of Fame.  Nor does it necessarily matter to the new possibility of U.S. legalized betting on baseball creating a final opportunity for Commissioner Manfred to reconsider.

We do know that it isn’t helping his case at all. We also know that OFF THE DIAMOND the word “integrity” never will come up in a discussion involving Peter Edward Rose Sr.

Until then, we’ll continue to let you be the judge.