A recent poll commissioned by the American Gaming Association shows evidence that people watch more games when they can bet on the outcome.

Are you tuning in for nine riveting innings of baseball simply for love of America 's pastime? Will you be concentrating on ESPN for two more months of NBA Playoffs just cause you love basketball? A big chance to root for your favorite team to spring a miraculous upset opportunity of Golden State. Or most certainly, do we spend hundreds of hours covering every NFL game on five networks, plus switch over to the NFL RedZone on Sundays because we don't want to miss a play?

PLEASE!! Let's not insult anyone's intelligence to suggest any of this nonsense. And perhaps send reasonable confirmation evidence from a recent poll commissioned by the American Gaming Association (AGA). A not so subtle message directed at the National Football League exactly why we are glued to our screens. It's gambling baby. And without its necessary sustaining support, the NFL would be in worry financial shape and even more certainly MLB, the NBA and the NHL.

This is not to suggest that the NFL evaporates should a mandated court order in the U.S. declare it be a prison offense for any citizen found gambling on football. And no doubt the AGA has a biased lobbying interest backing the legalization of sports wagering in the U.S. But the recent poll commissioned by the AGA isolated a simple point that IF laws were ever enforced the interest in watching football on television would seriously decline. And subsequently could collapse NFL economic foundation dependent on advertising and cable revenue backing. 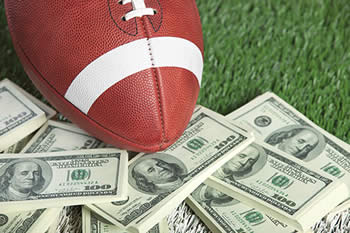 Nearly three times as many NFL fans support lifting the federal ban on sports wagering (PASPA) and believe individual states, not the federal government should decide whether to allow sports wagering within state borders according to the poll done by marketing research firm Morning Consult. In the poll, a minority of only 17% said they would not back legalization.

The other interesting information was viewing the team by team city breakdown of how interest would be compromised without betting on the game. In essence, would you simply watch without having any gambling or wagering interest on the outcome?

In the poll a whopping 44% said would strongly favor overturning PASPA (Professional and Amateur Sports Protection Act). 23% said they would favor it, but not strongly. 8% oppose it, not strongly, 9% oppose it strongly while 19% don't know or have no opinion.

Apparently, some Americans have become comfortable or used to betting with offshore sportsbooks. Asking "would legalization make betting on sports SAFER for consumers by allowing people to place bets with reputable U.S. -based companies instead of off-shore companies"? A surprisingly average number of 37% answered Yes as very likely and 32% somewhat likely. A significant 12% said not at all likely. This might indicate that wagering at preferred and reputable offshore sportsbooks may have secured many bettor's confidence over the years. Or simply that the quality websites, customer service and system for payout at large, well-known sportsbooks like Bovada, BetOnline and BookMaker has significantly improved over a period of time.

Maybe the most important question asked whether you tune-in or not whether you have a bet or vested financial interest in the result. Almost 55% answered they very much agree or somewhat agree that when I bet, I am likely to watch the game. In translation, a majority would likely not watch if they weren't betting that NFL game. Uh oh.

Or then again, imagine if The Bachelor wagering on ABC was really popular. Could you imagine the ratings!! Every woman in the U.S. would be watching every Monday night, 52 weeks a year and it would destroy Monday Night Football. But then again, we might have the potential for the biggest gambling fix in the history of mankind. Or womankind. $2M for an insider engagement ring? Just sayin'.

Too bad they couldn't offer prop wagering prior to releasing this poll. That is, which state and its specific fans agree they would or would not be affected by potentially legalizing wagering. Which specific people by loyalty in each market can or cannot support the game without having a bet on sports. **Keep in mind, the poll asked about sports in general but likely participants were focused on NFL football as the survey broke in down in the 32 individual NFL markets.

Again, it was not another surprise. They would likely have been the favorite if say a Bovada would have posted odds, but the New York Jets and New York Giants fans led the way with 32% and 30% they are more likely to watch with a bet on the game. Seattle Seahawks and Pittsburgh Steelers backers were at the bottom at 22%. I would think Stillers fans would take some pride in the outcome. As they don't need to be motivated by monetary gain to love their team.

As a marketer, I would take note at the numbers at the end of the respondent scale. Each state had the largest majority of anywhere from 25 to 40% in the "don't know" answer category. That represents people who haven't made up their mind and could be swayed with potential legalization. An opportunity Major League Baseball, the NHL and most certainly the NBA should be looking at. And likely why NBA commissioner Adam Silver has been very open-minded debating the potential for federal legislation to legalize sports wagering.

Not included in the content of the AGA/Morning Consult survey has been the NFL's always changing time schedule and feature night presentation. It used to be Monday Night Football was our big-time event for 25 years. Not anymore. Thursday Night Football has been added to the greedy roster along with the highest rated show on network television, Sunday Night Football. Again, we will not insult anyone or need a new poll to ask participants why. It's an opportunity for all Americans to either "get-out" of a losing weekend college and NFL football wagering marathon OR enhance their winnings before returning to work on Monday morning. It doesn't matter who is playing although the NFL scientifically schedule's their best to enhance ratings (and betting interest).

Another genius move occurred five years ago when the NFL moved "late games" on Sunday afternoon ten minutes back to 4:25 EST. The competition committee stressed this was to appease fans demand to know final outcomes of first games before the second-round games began. Yeah, right. Guys eagerly watch the talent competition at Miss USA.

In any case, currently all top online sportsbooks thank you with all sincerity National Football League. That extra ten minutes between games on Sunday now allows all bettors the necessary time to total their winnings or absorb their losses from "the 1:00 games". Allowing an extremely important online click to take place or a bet to made live in any Nevada casino. To think this allows a bathroom break or another sandwich made is absurd.

So, please keep the polls coming. They needn't be sent to the NFL offices on Park Avenue in New York. Give up on that. But now that we have a new Raiders team on the way to Las Vegas, we can only hope enough influential U.S. legislators will read them. And agree the sky is blue and grass is green. And subscribe to the reason that most of us pay for 15 ESPN networks and reason humans are addicted to the NFL RedZone – betting.