Why Isn't Online Gambling a New York State of Mind?

Glenn looks at betting in New York State, where the refusal to let gamblers play online, despite the overwhelming numbers from across the Hudson, is hurting operators and frustrating players.

U.S. sports wagering is nice, but no doubt New Yorkers would prefer to play at home

It wouldn't take a detailed research study to prove one preference choice for the quickly expanding legalized U.S. sports wagering industry. By an overwhelming margin, state by state, given the option, bettors are strongly proving the convenience of online wagering as their preference. Surely that's hardly any shock nor surprise.

The surprise and mystery shrouding New York state and their defiant Governor Andrew Cuomo is deciding to only legislate on-site wagering despite the obvious consumer choice. Especially eyeing a bar graph of undisputed success from next-door neighbor New Jersey. The Garden State is now exceeding 80% for online sports wagering despite a very convenient Meadowlands onsite wagering destination. Keep in mind we haven't hit the ferocious Winter months yet, when the numbers online can only be expected to predictably climb.

The flurry of recent activity opening new sportsbooks throughout the U.S. over the last month is no accident.  NFL and NCAA football kick-off in a matter of days, coinciding with the number of legalized states in the U.S. now reaching twelve. It's possible it could get as high as 15-18 over the next six months. One state, Tennessee, has legislation on the books to ONLY include online wagering as an option. Yet New York opened their doors in July with only onsite sportsbooks for betting convenience. Make that inconvenience. Why??

Looking at the early numbers certainly give no indication of a hopeful sign. Yes, it occurred in the middle of the deadest part of the overall sports calendar. BUT keep in mind this happened onsite at semi-seasonal tourist areas including the Rivers Casino & Resort in Schenectady and the more modest Tioga Downs Raceway in the Southern Tier.

The sportsbook at the Rivers generated $168,743 in revenue for the week ending July 21, falling to $91,591 by the following week and then bottoming out to $25,386 by the first week of August. Not to pick on these guys, but in comparison any one of the top online sportsbooks might accrue similar numbers in a matter of hours on one online day.

The tally carried a response from a Rivers spokesperson who described the fluctuating revenues as "…no surprise at all," adding: "We’re very happy to be able to offer our guests the ability to place legal sports wagers. Even with no real major sporting events, we are seeing new guests visit the property each day."

That honest quote is noteworthy in that it signifies what Governor Cuomo and many other powerful lobbyists were thinking in closing the door for online wagering. They look upon sports wagering as an ancillary tool to bring new customers into the casinos, racetracks, resorts and hotels to augment revenue. Not rely on it to create a new, profitable source of income.

Sports wagering at Tioga Downs in the Southern Tier was described as 'mercurial'. Sports betting generated $13,632 in the first week following launch, increasing to $41,188 the following week before falling to just $7,750. The week ending August 11 has seen revenue return to a comparatively healthier but still nonetheless mediocre $11,271. Where Tioga downs is remotely located, it is difficult to envision many driving too far to make a wager, making online wagering that much more common sense.

Keep in mind the state of New York is also missing out incremental online revenue for poker, slots, blackjack, roulette and every other traditional casino game. It may seem like yesterday, but these options have now been operational in New Jersey for five years now. That’s right, five years.

Even before legalized sports wagering came into effect in June 2018, New Jersey was experiencing a nice upswing in online gaming. Without any positive proof it was having a cannibalizing effect on Atlantic City onsite casino gaming, online wagering was gaining new customers and, in some cases, increasing play for existing players.

Meanwhile in two much smaller states, frustration is dooming anxious football bettors where online sports wagering has been legally approved but mysterious forces have not allowed wagering to begin yet. 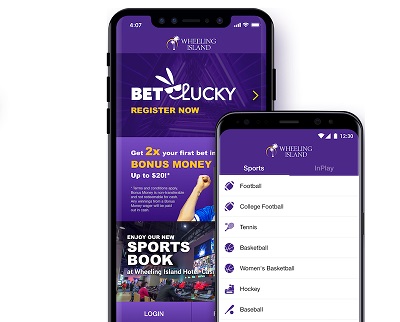 It seems a lingering dispute between Delaware North and management services provider Miomni has closed the only then-live mobile sports betting app, BetLucky, in March. Press releases disclose compliance issues blaming the Wire Act as the primary reason for delaying DraftKings' mobile launch, although it doesn't make much sense.

Over in Rhode Island, the Joint Committee on the Lottery has a meeting scheduled for August 26th, during which they’ll likely discuss the status of the mobile app. During the legislative process, the Lottery Commission indicated it could launch mobile within six months. Not good news for bettors looking to get down online for the start of the NFL season and this week's NCAA football kick-off.

With Rhode Island the only current New England state with legalized betting, it surely would be a long, long drive for anyone wanting to get a Patriots bet to the window. In comparison, it makes that annoying trek for New York City sports bettors over the George Washington Bridge to The Meadowlands or the New York/New Jersey border for their cell phone look reasonable.

Reality is a Lock

It shouldn't be too much longer for progressive Governor Cuomo coming to his senses. I won't get into nor speculate why a man known as such a liberal force is being so conservative and regressive weighing such obvious evidence. Seeing the September wagering numbers from rival New Jersey could bring about his online betting signature. And that would be potential relief  and a welcome opportunity for some NY sports bettors hoping to remain home during the cold winter months.