When Will the NFL Send a Thank You Note to the U.S. Supreme Court?

Monday Night Football has almost become an afterthought and the NFL should admit that legalized sports betting propels even the worst of games.

Besides gambling, why was anybody watching the MNF Giants-49ers game?

Though I can’t see you, will anyone who actually watched and DID NOT wager on the last Monday Night Football game between the Giants and 49ers, please raise their hand.

Thank you. I envision zero and don’t feel bad. Without potential financial reason to keep you awake, there was absolutely no reason to watch two teams with no playoff chance playing poorly and going nowhere in the middle of the NFL season.

While headlines are embracing new NBA and NHL deals between the leagues and wagering partners, the NFL still sits defiantly on the sidelines acting as if betting is their enemy. As if anyone outside of New York or San Francisco truly gave a rip of interest with so many other options.

In a way, you had to feel some sympathy for ESPN, trying to sell this story line.

The major focus was on Giants rapidly aging QB Eli Manning and the almost certain reality he won’t be returning in a NYG uniform next season. In fact, it’s not a lock whether Eli will be returning to football at all should his skills continue to diminish and a potential retirement loom.

On the other hand, since 49ers QB Jimmy Garoppolo has been lost for the season, new young savior Nick Mullens has added some hope, but he wasn’t what ESPN signed up for when originally scheduling this game.  More importantly, they didn’t contract a feature game match-up of 1-6 vs. 2-6 teams.

What the F has happened to Monday Night Football?

Once the highest rated television event of the week has become a sad, shadow of itself. Whether you were a sports fan or not, in its heyday everyone heard of Howard Cosell, Don Meredith and Frank Gifford in the most anticipated game on the NFL schedule. This is where Al Michaels invented the phrase "don’t tune out yet, it’s not OVER".  Now any two teams seem to show-up with different announcers filling the booth year to year.  Last week’s Giants-49ers game was a new low for both fan interest and casual viewership as well.

Conversely, it’s no coincidence that the NFL carefully plans it’s feature game for every Sunday Night on NBC.  Then after Thanksgiving, they reserve the right in the final four weeks to rotate the schedule to feature playoff-oriented teams. Often, unfairly at the behest of many people who purchased tickets and planned to be at Sunday night games earlier in the year.

Just this week the NFL announced two Sunday afternoon games rescheduled for Sunday night in December. Say goodbye to the 49ers at the Seahawks on December 2nd, now replaced by a ratings draw match-up between the San Diego Chargers and Pittsburgh Steelers. The following week the Chicago Bears at LA Rams game will be moved to Sunday Night Football. Subsequently, the league will have to decide for Week 15, as the Eagles are tentatively scheduled to take on the same Rams in LA that Sunday evening. Woah.

That all makes sense and is simply good business. But what the NFL won’t admit is these higher-rated focus games also drive more betting interest, which in turn increases television ratings.

A similar situation has occurred for the NFL Network, which shares the broadcast with Fox for NFL Thursday Night. They have relegated Monday Night Football to third place among these night football broadcasts. Even the final few weeks of the NFL season are big winners for Saturday Night Football. Basically, freezing cold weather across most of the U.S., along with new legalized sports wagering, will help drive Saturday Night Football ratings ahead of last season. 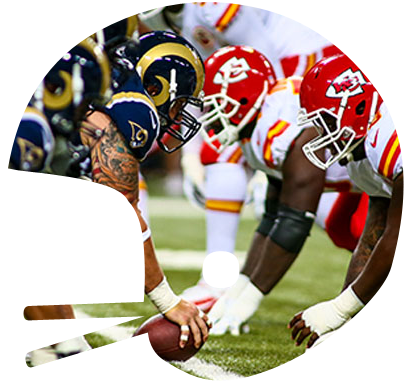 ESPN received a giant gift for next Monday Night Football’s Chiefs-Rams game. Hazardous field conditions have driven the game location out of Mexico City to Los Angeles but that should hardly matter for this highly anticipated match-up.

The NFL would also be fooling itself if it didn’t believe that gambling wasn’t driving interest for a battle between 9-1 teams. At this juncture, here are the current most popular wagering lines from preferred offshore sportsbook Bovada:

Although the traditional point spread line will get plenty of action it is the Total Over/Under that draws the most attention here. That 63.5 number is a record for an NFL game and likely will skew slightly higher by kickoff time. Don’t expect this to be any type of 28-14 affair. The traditional nail biting that accompanies these mega-features is all but predicted for football bettors.

Monday night also is a prototype model for the growing popularity of '"in-game" wagering, plus the rise of interest for bettors paying attention to halftime opportunities.

It is ironic that this game will likely draw the most wagering action for any regular season game this season.  Yet is the exact opposite of last Monday Night Football’s Giants-49ers game.  Any casual or fervent football fan won’t need to wager a dollar to enjoy tuning in.

What would it take for the NFL to retract its corporate head out of it's ass and admit gambling fuels the interest in its product? How about a planned one-day (or evening) protest on wagering of it's product?

Yes, I realize it’s a fantasy, but that recent 49ers-Giants sleeper would have made a perfect vehicle. A suggestion for every bettor to NOT wager one dollar for simply one NFL game, proving to the NFL gods that the world is changing.  Please join the NBA, NHL and even Major League Baseball in acknowledging the new presence of sports wagering.  Their television ratings would collapse like a house of cards.  But sadly, the likely result would be "to be determined" NFL Monday Night Football games for every week of the season.