With Tiger Wood's big win last weekend at the Masters also came big wins from bettors and a renewed interest in the sport and betting on golf.

Tiger Woods never to be forgotten comeback couldn’t have come at a better time for sportsbooks.

Fore!! Duck and get out of the way for the crush of Tiger Woods stories welcoming golf back to the spotlight both for sports television and on the U.S. fairways. But don’t pick your head up just yet. They’re followed in the second shot by press releases this week of lucky, loyal Tiger maniacs, amply rewarded for their patience, stories of those who cashed royally by wagering on his surprise victory last weekend in Augusta, GA at the Masters.

If You Were Sleeping Last Sunday

Just in case you might not have heard, Eldrick Tont (Tiger) Woods regained his throne as king of the sports world by shocking all naysayers, winning the 83rd Masters Tournament by one huge stroke. If Tiger never wins another tournament, he has proven after over a decade, he is immortal by beating the world’s best golfers, many 15-20 years younger.

What he also proved, is golf can indeed be a wagering sport as well. He amplified the power of his victory in front of television’s biggest audience of the year. There wasn’t a single story that didn’t include his odds listing right behind his winning margin and score. It was almost felt like we all missed out on the greatest potential payoff in history by not believing in Tiger. Most preferred sportsbooks had Woods locked-in at anywhere between 12-1 to 15-1 prior to tee-off, with a figure of 14-1 most mentioned as a consensus.

What was most remarkable were the increasing odds listed prior to the 10th hole in the final round last Sunday, as it didn’t appear Woods was a lock to capture his long-lost major title. Some books had him listed as high as 15-1 prior to the 12th tee on Sunday before everything started going his way. One by one, every competitor began shanking shots into the pristine water hazards of Augusta National, scripting the way for Woods’ all-time feat on the back nine holes.

The next day opened the floodgates for not only stories about Tiger’s comeback, but also the financial baths several well-known sportsbooks were taking via the royal hands of his memorable win. From William Hill to DraftKings, articles were pouring in with faux sympathy for the record loss major books experienced.

None were more glorified than the press release about James Adducci from Wisconsin. Adducci, had his winning tickets published in photos alongside William Hill executives in Las Vegas, celebrating the over $1.2 million he won by wagering $85,000 at 14-1. Remarkably, Adducci claimed it was the first bet of any kind on sports (per ESPN’s Ben Fawkes),  He said that after flying to Las Vegas to make it, he was initially turned down at two "unnamed" sportsbooks.

That made for a "pretty good first bet," William Hill’s Nick Bogdanovich told ESPN on Sunday. Adducci then flew back to Las Vegas on Monday to receive what the Action Network’s Darren Rovell reported was the "the largest single golf payout" in William Hill’s U.S. history. The director of trading for the United Kingdom-based company’s U.S. operations, Bogdanovich said that the sportsbook took an overall loss of "seven figures" on Woods’s win.

Depending on how you perceive it, the next day added even more paragraphs to the publicity and story plus sadly, an asterisk in common with Tiger himself.

A subsequent personal investigation found Adducci guilty of several prior domestic abuse charges between 2009 and 2016 with one 30-day stint in jail. Other charges included non-criminal disorderly conduct and jumping bail.  When contacted Adducci claimed, "This has nothing to do with winning the bet and I don’t give a sh%t".

FanDuel confirmed more than $3 million in losses, with more than $1 million a result of a promise to participants in a contest that all would get a refund if Woods won. As with officials from DraftKings, a FanDuel executive asserted to Rovell that, in the long run, Woods’s return to prominence is a positive for their business.

It is without absolute any doubt. Like publicizing a lottery ticket winner, Tiger’s Masters win floods the imagination of thousands of people that they need to share in that dream as well.  In this case for sports bettors that GOLF, as much as football, basketball, etc. is the opportunity we must investigate in the very near future. 14-1 on Tiger Woods!! How did I miss that? You get the fairway picture.

These popular headlines couldn’t have come at a better time for golf AND golf wagering sponsorships. Right behind the NBA, the PGA was next to embrace the possibilities of legalized wagering in the U.S. before the reversal of PASPA (the Professional and Amateur Sports Protection Act) last May. There was no hesitation on the PGA’s part to imagine the opportunity for betting to enhance their sport. In late February they began laying out rules for players. Here’s how it works:

The new PGA policy allows players to "have sponsorships by casinos and other legal gambling companies." A player cannot, however, have an endorsement deal within the United States with a company "whose primary purpose is sports betting."

The examples the Tour gave players involved daily fantasy companies like DraftKings and FanDuel. They are both considered "gambling companies," but neither company’s primary purpose is sports betting, so endorsement deals with these companies would be allowed.

However, a sponsorship deal with an online gambling company like Bet365 or Bwin within the U.S. would not be allowed, although the new policy does allow players to sign endorsement deals outside the U.S. with those companies. 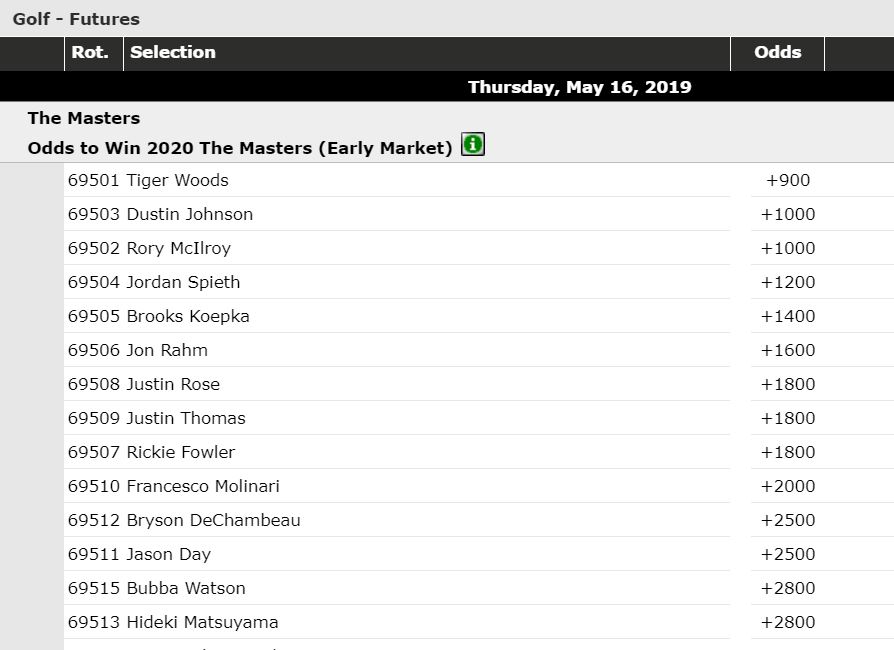 Shall We Make it Interesting?

As far as the direct wagering aspect, the opportunities to bet golf before and during events should zoom upon the next major championship. Besides predicting tournament future winners, individual head to head match-ups, in-match play, plus day to day updated wagering are all readily available. And have been readily available through the list of top online sportsbooks for a long time.

As a caveat, look for the opportunities to take advantage of the public’s prejudice akin to any other sport. No doubt starting with Tiger Woods.

If Woods were any other golfer, their odds of winning the Masters would have been at least 25-1 on the board and not nearly 12-1 to 15-1. He is an icon beyond the New York Yankees or the Tom Brady New England Patriots. If anything, bettors received a short price and have been receiving a short price on him via the futures board for several years. Look for that to get worse soon. Therefore, win or lose it's buyer beware.

Following him are several known names. Quite popular, but not as revered as Woods, including Phil Mickelson, Dustin Johnson, Jordan Speith, Jordan Rose, etc.  Generally, the "pop stars" of golf. Serious handicappers can study course by course opportunities and current form in comparison to any other athletic competition.

Checking the futures board for the 2020 Masters on prominent sportsbook BetOnline, Tiger Woods is listed as the favorite at only +900. It’s a long, long time away and Janet Jackson still sings 'What Have You Done for Me Lately'. What can’t be disputed for now, Tiger has brought not only golf, but golf wagering back to life.