Second half football betting can be profitable

Halftime betting can be more beneficial than analyzing an entire game itself and bettors can smartly utilize the approximate 10 minute break between NFL halves to their financial advantage.

"I'll call you at halftime". "Getting something to eat at halftime" "When the first half is over, I'm heading out the door". Popular refrains for most of us but not for a select group of bettors who smartly utilize the approximate 10 minute break between NFL halves to their financial advantage. Halftime betting, in many ways, is more beneficial than analyzing an entire game itself against the more popular, conventional line. Here's how it works:

Like chess, the best players plot their moves well before its time to make their move. That means planning your strategy around the 7:30 mark of the 2nd quarter. Many of the most clever, experienced online sportsbooks are already doing their homework as well. They're anticipating how to set a 2nd half NFL line with only approximately a minute or two to make a decision. Not an entire day. '

Bovada, BetOnline or Diamond Sports are monitoring each other along with Nevada sportsbooks to see where to set the line, anticipating bettor reaction with hopefully the same outcome to secure efforts that will result in EVEN WAGERING, which unfortunately rarely results in NFL 2nd half betting. With only approximately a "10 minute halftime break" to work with, it's impossible to gauge player reaction and a tilt of action that's often way out of whack. The line changes occur within seconds, not hours and a poor decision of a half point can make the difference in winning or losing a bet. Whether you're deciding on either team to bet or an Over/Under wager, it's a game itself to outguess the public within a minute to receive an advantage.

The "Smart Money is usually Brilliant 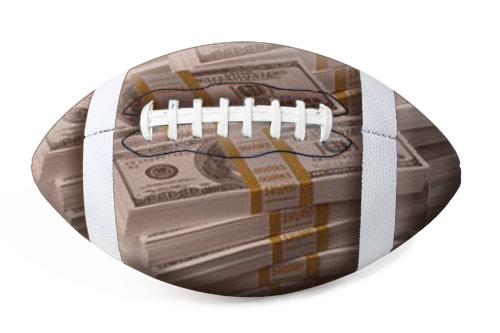 Since the beginning of handicapping time many forums have debated to bet games on or against the public, with or against the "experts", etc. If it was that easy to find a definitive answer none of us would be working for a living. We'd all be hitting 90% and getting fat rich. Unfortunately, in the 2nd half wagering world, the opportunities seem to be somewhat easier to win bets, but nobody can seriously retire. A few reasons why:

Most top offshore sportsbooks limit the amount you can wager in the second half of NFL games. They echo Nevada sportsbooks in that there simply is not nearly enough time to receive equal action and level off action. It is not uncommon for one side to receive 80-90% of action on an NFL Sunday. For example, the Steelers might get a large maximum bet or bet(s), while their opponent, the Titans receive virtually zero action. The Over might get 85% of play with only two minutes left before halftime to see potential even action. The only alternative is to raise the line or the vigorish to discourage more betting.

It is very, very interesting to note that the "smart money", especially the wagering in the first minute or two after the first half ends is often successful. Many "sharps" seem to zone in on this chance and seize this opportunity. Kind of like getting the prettiest girls at the dance before the rest of the guys even show up. It's extremely worth watching and although not foolproof, a trend that has excellent viability.

As a perfect example: the Buffalo Bills were engaged with the Cincinnati Bengals in what seemed like a tight game at the end of the first half. The Bills had some momentum scoring a touchdown in the final seconds to get close 17-14. Instantly, the moment an EVEN (Pick Em) betting line was up at BookMaker, Just Bet, Bovada and most other major sportsbooks...bam, most wise bettors sensed a major opportunity.

The percentage (%) of bets is posted at many sportsbooks. 79% of all wagers were on the Cincinnati Bengals at Diamond Sports at that Even line with the vigorosh skyrocketing to -141 from -110. The Bills remained at Even but now at an enticing +121 to lure bettors. It evidently didn't work as one minute later the Bengals were up to -1/2 at similar -130 odds. This is huge, meaning a traditional 10-10 or 17-17 second half game means a loss rather than a push for a Bengals bettor.

Yup, as you would guess the Bengals cruised in the second half 17-7 in route to a 34-21 win over the Bills. Again, this handicapping tip is not infallible, but as proven again made some smart bettors look even smarter by being prepared to take action ASAP.

Get in on 2nd half betting at Elite-Rated 5Dimes

Most major offshore sportsbooks have (3) options to select for 2nd half wagering. Betting a side, selecting the Total on over/under or choosing the Total over/under on either team. Whether betting a side or the totals, the formula is largely based on two major factors. The original spread on the game and the situation after the first spread relating to the outcome of the game.

If the Cowboys were favored by -10 over the Redskins and the score is say, 24-0 Cowboys after the 1st half, it is not uncommon to see a line of the Redskins -6.5 in the second half. Knowing they might be running the clock out, resting starters, etc., there would be less incentive for the Cowboys, therefore affecting the line toward their goal of simply winning the game. While the Redskins would be desperate to score points, determining the outcome.

In similar fashion, the Over/Under lines are gauged the same way. If the Cowboys/Redskins game O/U was 48 and the score was 10-0 either way after the first half, don't expect to see a 38 O/U line for the second half. It logically might be more in the 24.5-28.5 territory. Over/Under wagering is popular with bettors but generally not as uneven. Of course, like complete game betting, selecting the Over seems to be the consensus choice for most bettors to not be out of the game at any point. That trend is more evident in selecting a specific side to bet Total points as there are often some terrific opportunities to bet a team Under the points scored in the second half.

Again, rule one is start planning your strategy mid-way in the second quarter. Immediately when the first half ends, get ready to pounce and wager your selection. Should it coincide with "the sharps" early betting, you might feel more confident and surely gain a key half point and/or reduced odds for your homework.

Oh..the sportsbooks take the very brief NFL halftime timeline very seriously. The split second the kicker hits the football to begin the second half, all bets are closed and your opportunity is over. You can then go to the bathroom, call your friend or make your sandwich.