Several newer online sportsbooks are using Twitter to recruit new players and new shop Top Notch Odds is using a person who has stiffed players at other websites to promote the book.

Here at OSGA we are constantly scanning the Internet looking for the good, the bad  and the ugly sportsbooks. One of the best places anymore to find out some of this information is on Twitter. And, Twitter is also a haven for scammers, terrible so-called ‘handicappers' and sports betting services that are anonymous and unverifiable. So, it becomes a viable resource for finding scam sportsbooks and less-than-honest participants in the online gambling industry.

New sportsbooks pop up on Twitter seemingly every day using monickers like "Established Offshore SportsBook" or the "best Offshore Sportsbook", neither of which could possibly be true. One or two that we found are Twitter Only, with no website promoted and the use of PayPal or Venmo for deposits!

Over the years many scammers have ripped off American bettors simply by slow paying, then no paying and finally shutting down, disappearing into the abyss. Sadly and too often, many of these disreputable bookmakers resurface and repeat the same process over and over again. Some guys just don’t know when to stop. When enough is enough. When they have stolen from enough players to call it quits. These are the guys who think they can just keep ripping off the betting public by changing domain names, URLs and using different fake names to lure customers, who, if they win, will eventually get stiffed.

One of these guys is Rodrigo Castro. If his name sounds familiar, it should.

Remember BetMayor, who used a bogus story about another sportsbook to steal player funds? At that time he used the name Jeff. Then there was WagerWin, who was ‘bailing out’ the BetMayor fiasco. WagerWin lasted about 4 months. How about Wager506? Rodrigo owned/ran the place, stole from customers and ran with player funds. And finally, Wager305. The last, or so we thought, scam sportsbook brought on by this Costa Rica native.

Well it looks like he is back at it again.

This time he’s hawking a place called Top Notch Odds. They are on the web and also on Twitter, which they are using to recruit players. They offer a 200% sign-up bonus with a 10X rollover. If that sounds familiar and too good to be true, it is. And it’s the same bonus used at BetMayor, right before they closed up shop. 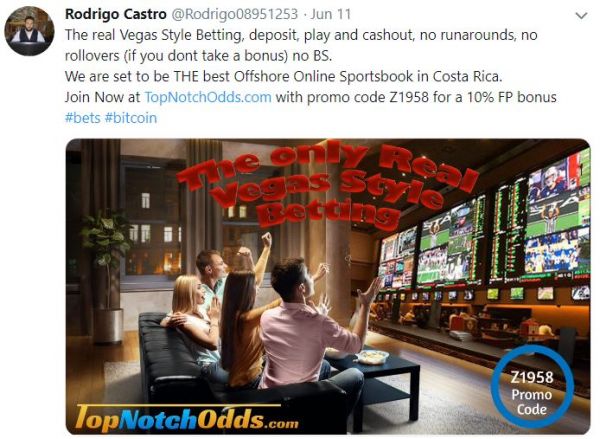 TopNotchOdds is another place using the Price-Per-Head model, where there is little or no investment, and can be operated on a shoestring, with almost no funding. The place appears to have some credit card processing, but players are definitely pushed to BitCoin, where again, no real investment is needed to setup payment processing.

After this alert was posted we were contacted by Top Notch Odds ownership who informed us that Castro has nothing to do with player funds or any aspect of the business. For more information, please read the update on TopNotchOdds posted August 6th.