New 'No Pay' complaints on CRSportsBet

CRSportsBet has had some problems over the last year, but the sportsbook has recently ignored several balance confiscation and no-pay complaints that center around players who are allegedly in violation of their rules. 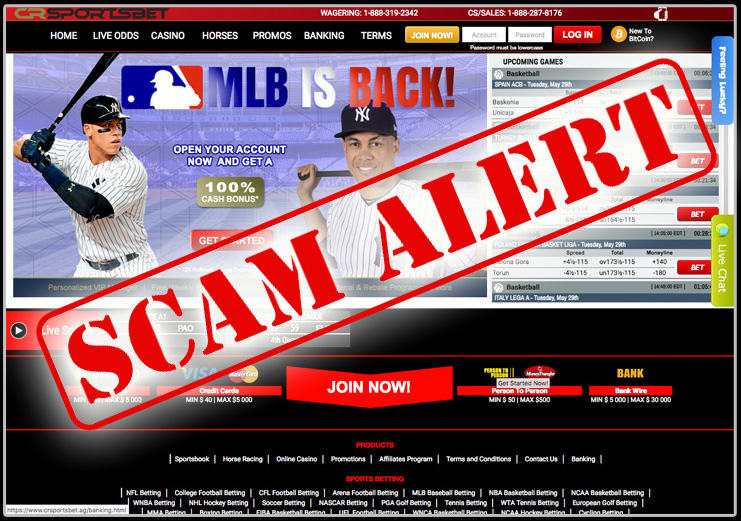 Blacklist Notes:CRSportsbet opened after a split from scam shop BetMayor. CRSB started out doing a good job, taking care of several BetMayor players and paying customers in a timely manner. But, like many books, CRSB had some issues with payment processing in 2017. Later in 2017 they confiscated the funds of several players that were found to be a) in violation of their rules or b) too sharp (wiseguys). We worked through some of their issues and several players were paid or put on a payment plan. Recently, players who are owed money have been shut out of their account, told they weren't being paid and now ignored. Several players are now in a No Pay situation.

Specific Notes: OSGA was first contacted by a player who was being slow paid after last football season. Once he ran his balance up and started asking too many questions, his account was closed and he was deemed a 'sharp player', not welcome at CRSportsBet. OSGA contacted the head man and we were told that the player would be paid out his 11k+ balance, just that he was no longer welcome to play there. The player has slowly gotten a few payouts causing us to believe what we were being told. But, over a year later, he is still owed in excess of 5K. CRSB insisted they would pay and they have been, however, getting a little more than half owed in a year is just not acceptable.

A player contacted us back in November after running his account up to over 16K. He was told that he was 'non-recreational' and CRSB was closing his account and confiscating his balance, per their rules. He had sent in two deposits totaling 7K and lost before sending in another $2,000 and winning more than losing. This player place hundreds of bets and some of them were a bit out of his normal betting pattern and some of them were placed as the line was moving. In our minds this is a free-roll job by the sportsbook. We again contacted CRSB and were told that despite breaking the rules, he would be refunded his deposits. As of this writing the player has not received any refund.

Another player contacted us when his account was closed and funds confiscated. He told OSGA that he and a couple of his friends who played at CRSB were told that they were colluding, betting in each other’s accounts and thus all of their funds were being taken. We also investigated this claim and the players were indeed playing in each other accounts, but not really colluding to exceed limits, move numbers or get bonuses. These three friends were just using whichever account had money to place bets. In all fairness to CRSB, every sportsbook has this rule. Sportsbooks wants individual players, not any type of group betting with them. We worked with CRSB and these players and ultimately came up with a resolution where the player with the largest amount of deposited funds would be refunded and he could sort this out with the other two players. Though CRSB maintains that they refunded him, this player never received any of the promised monies.

Fast forward to April of this year and complaints started piling in, with a familiar ring to them. Four players were found to be violating the rules and thus their funds were being confiscated.

One player got his account up to $5600 and had four pending $1000 payouts. CRSB closed his account and refused to respond to his calls or emails. Within three days another player with a balance of $5632, who only plays MLB, had his account closed after playing at CRSB for over a year.  He requested a 1K payout and was told that his account was closed, funds were being confiscated and there was 'nothing that they could do' for him. As of this writing neither of these players have been paid. CRSB is claiming that these two players were non-recreational.

In this same time period we received a complaint from a woman who also ran her balance up to over 5K. She started to get very worried after requesting a $1000 payout and CRSB started to delay and cut her off from their chat service. She has been promised her payout and yet can't seem to get any answers as to the whereabouts of her funds. She was to be paid in Bitcoin and has now been waiting over a month with no payout.

The fourth player to contact us was accused of collusion with another player. CRSB stated that they used the same IP address to place bets and thus were colluding. This Canadian player said that he didn’t know anyone else who player at CRSB. We examined the IP logs of both players and found that they did place some bets from the same IP address. The player then told us that he plays from various places, including public Wi-Fi and that had to be the reason CRSB thought this problem was real. After looking through the evidence that CRSB supplied to the player we found that after hundreds of bets places, less than 3.5% of their action at the same IPs. With just this evidence it is hard to show any type of collusion between these two players.

The reality with CRSportsBet is that they are finding ways to use their rules to free roll larger players and confiscate balances as part of the way they do business. We understand that sportsbooks will show players the door who they deem to be too sharp or unbeatable; players who do not 'fit their business model' is a term we hear. But, these sportsbooks will pay out the players balances, timely and in full. Not free roll them in the hopes that they lose, and, when they don't, confiscate their balances. Every sportsbook also has a collusion clause in their rules as well. And we realize that sportsbooks need to make sure that players are playing in one identifiable account. It takes strong evidence, or in the case of the first complaint mentioned above, admitting the fact that they played in each other accounts, to prove that players are working together to commit fraud against the sportsbook.

Until this recent rash of complaints CRSB was always willing to work with us in an attempt to resolve complaints. But, we have sent multiple emails to them regarding the issues listed above looking for answers. The head man did try to call one day, but unfortunately, it was the day the Supreme Court ruled that sports betting would now be allowed throughout the United States. We missed his call and asked that he try again. We also have not heard back on repeated requests for email documentation to support CRSB's claims and the subsequent no pay reports.

Readers should notice the theme here from CRSportsBet. Players who win large amounts have their accounts gone over with a super-fine-toothed comb, confirmed in their rules, “All payout requests undergo an internal due process and pass several stages of management approval before processing.” For these players, CRSB found a way to not pay, while leaning on their rules. One no pay complaint is significant, but four complaints on a place that only has a few hundred customers, within a week, all with no pay claims, leads us to this Bad Bet Alert.

Recommendation: Unless you are a player who bets under $100 and loses more then you win, avoid CRSportsBet altogether.