Many are giving Andrew Luck much respect for intercepting millions to score the ultimate touchdown, except for future bettors.

No matter what is written this week involving the stunning retirement announcement from Andrew Luck, it will not sooth nor change the opinion of those who have funded Indianapolis Colts future bets involving their 2019-win total, AFC Championship and Super Bowl dreams. Point blank, you don’t get any sympathy dollars nor compensation tears while tearing up very early future book tickets and watch your money flushed down the sportsbook toilet.

I suppose if I had a wager or two down, I would be a tad upset too. And this doesn't include the thousands of Colts fans who simply were counting on momentum building glory after a return to the playoffs last season.  But hold your horses.

Always About the Money

First off, the Indianapolis Colts could have gotten some compensation for the shockingly early retirement of quarterback Andrew Luck, but they reportedly won’t be recouping the $24.8 million owed.

Despite they could have gotten  the $24.8 million back from Luck, the Colts have reached a financial settlement with him and will not take back any of the money they are owed, league sources told ESPN. The Colts essentially are telling Luck to keep it all, even though it is within their rights to reclaim the money.

This might have been a good move by the Colts financially and for other reasons not on the contract. Now they can look toward the future clearly with the retirement official.

Not About the Money

What makes Andrew Luck quite different and a true MVP (Most Valuable Player and Person) is what was NOT written on his massive long-term contract. His heart wasn’t into it and his body was breaking down if not already broken. Kind of like a car’s engine ready to quit.

Rather than risk a lifetime living in constant pain, weekly rehabilitation and agony, he chose to accept reality and prioritize his family and future. Only a "potential" Indianapolis Colts Super Bowl appearance or win was at stake. And yeah, those 2019 future book bets and fantasy team investment wagers.

Who is Andrew Luck? 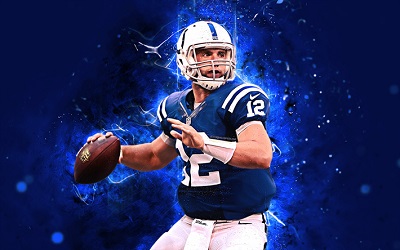 This is an era where NFL superstars like Antonio Brown threaten retirement over using their preferred helmet.  Welcome back Le'Veon Bell, who sat out an entire NFL season healthy demanding extra millions of dollars. It might have cost the Pittsburgh Steelers a Super Bowl appearance. And if seriously injured during this upcoming New York Jets season, he may not possibly recoup overall dollars lost.

Here we have Andrew Luck physically pronounced ready to play but can’t envision at least a 16-game season for the Colts where he can provide 100% of his great abilities. There are no substitute jobs for him that pay nearly what he would have made for at least five to maybe ten more years IF his body held up.

In a memorable past television clip, Luck was filmed using his ancient flip phone instead of a conventional smart phone Android or iPhone. Asked why he was reluctant to upgrade or change, he commented "it wasn’t worth the money for the extra investment". That was the sign right there of a very different type of dude.  A true no bling warning that money or fame would be a future motivating force.

Is the Quarterback Underpaid?

Any argument on who is the most important player in any team sport is now officially over for good. That is, if you now check the future odds of the top Las Vegas or preferred online sportsbooks. Luck’s bombshell upended the boards everywhere and confirmed that the QUARTERBACK is the mandatory key to winning a football game. Nowadays, no matter how great your defense is, you don’t get a Vince Lombardi trophy without a very qualified QB.

A current check of popular sportsbook Bovada has the Colts at a remote +5000 for capturing the Super Bowl after a wise-guy selection of +1850 just last Saturday afternoon. If you still have hope, an even better value at 5Dimes+5500.

Sadly, in the competitive AFC South Division, the Colts are now the longshot at +470, behind the Texans, Jaguars and Titans. Speaking of 5Dimes, they have dozens of head-to-head future Super Bowl matchups posted before the season kicks-off. Many insiders envisioned a potential Chicago Bears-Indianapolis Colts game down in Miami for next February. Odds for that currently listed at +18700. Wow.

Even NFL Week One has seen an immediate overwhelming adjustment. Before the big news the San Diego Chargers at home were listed as -4 favorites over the Colts. That has skyrocketed to -7 or even -7.5 at some locations. That kind of line movement is the NFL is virtually unheard of.

Luck’s departure has even affected the individual MVP betting boards. A recent check at Bovada has the top 16 candidates all listed at the quarterback position starting with Patrick Mahomes (+500) to Lamar Jackson (+4000). Many have seen their odds dip since Luck’s retirement. Luck was second or third choice at many top offshore sportsbook locations before the major announcement.

The only comparison here might be to horse racing. Many people (including myself) like to take a flyer on predicting the early Kentucky Derby winner at longshot odds. Should the horse’s trainer or owner decide not to run, he’s injured, he doesn’t have enough qualifying points, whatever…there are no refunds on the tickets.  It’s part of the assumed risk. In the NFL injuries are a reality, but retirements?

The same goes here for all NFL future bets. I do have some sympathy for the bettors who are angry. What is in question is the unprecedented "timing".  Luck didn’t become seriously re-injured during the preseason and nothing seemingly changed from January to late August. It would have helped the Colts (and of course bettors) for Luck to have made this decision before the NFL Draft in late April.

Using a cue from other recent sportsbook promotions, I’m hoping no new legalized U.S. sportsbook gets cute and dreams up Andrew Luck refunds as an incentive for their customers. Secretly, I’m betting a few other NFL quarterbacks in mega-pain with healthy bank accounts are jealous of Luck’s decision. Look out . . . it could start a new trend.