During coronavirus lockdown, casino gamblers are proving that despite risks, they are willing to play.

Starting last week, several states decided to reopen casinos. Most casinos were smaller and in remote areas, but nevertheless, the lines proved to be long. In Arizona, Harrah's Ak-Chin Hotel and Casino, located about 40 miles south of Phoenix decided to open and it made the news, as up to 200 people lined up prior to the opening time. But casinos in Oklahoma also saw massive line-ups. In fact, there was a report that the Thunderbird casino, located in Shawnee, Oklahoma had even longer lines than the Ak-Chin casino. And this week some tribal casinos in parts of California and Idaho opened as well and are expecting long lines. When people in the line were asked by local reporters why they were lining up, the common response was that life was a gamble and this was just another risk they were willing to take. It is notable that from the videos, few people in the line were physical distancing and very few people were donning masks.

As part of my last article we posted a Twitter poll asking how likely players would be to attend a casino with strict precautions such as temperature checks, mandatory masks, well-distanced slot machines, blackjack games where only the dealer touches the cards and similar measures. The result of the poll showed an equal split with almost as many people indicating they were likely or very likely to return under those circumstances as those who indicated they were unlikely to go. The results are not surprising and reflect the general sentiment towards reopening any business. 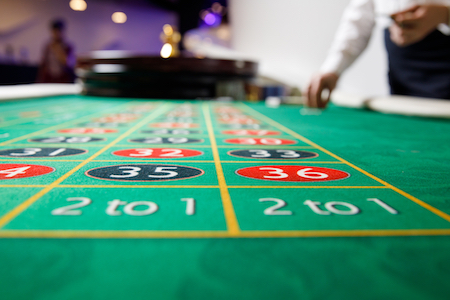 While the lines have been long, the attendance at the casinos is still much lower than usual, since only so many people are allowed in the casino at one time and it is evident that most gamblers have decided that the risk or restrictions aren't worth it and have stayed home. And to the casinos' credits, some facilities went to even greater extremes to ensure social distancing than was expected. As an example, at one casino in Oklahoma, if someone sits down at a slot machine, the machines on either side of it lock until that guest leaves, thus ensuring physical distancing. At the same time, there have been many reports that the lines on the floors to indicate a 6-foot spread were being ignored and there was some resistance to wearing masks. All casinos require masks to be worn and those who didn't have one were handed a mask and sanitizer before they entered the casino and were not allowed to enter until they put it on. Casino management has said the openings were a trial and that everyone was cooperative, but interviews with people who left the casinos suggested that once they entered the casino . . . all rules were off. One woman who left Harrah's Ak-Chin casino called it a madhouse on a local news report.

The thing that has been most evident, however, is that the states opening up first are those with limited gambling options. To date all casinos that have opened are Tribal casinos and are in states that do not have any form of online gambling or sports betting. Many tribes have been feeling the pinch and have been anxious to get the money flowing again and some reports have suggested that a lot of tribes never wanted to shut down casinos in the first place. A few California tribal casinos only closed after the police went in and shut them down. The IGRA gives the tribes the exclusive right to decide how to operate their casinos, but it does not trump state laws. So, when California Governor Newsome ordered mandatory stay at home orders, the casinos had no option but to abide. And undoubtedly the states are feeling the pinch too. Some tribes have even indicated that they may want to revisit their compacts if the states they have a compact with are violating the conditions, regardless of the reason.

States with online gambling in no hurry

As for states that have other forms of gambling, there seems to be much less urgency to reopen and the four states that have legal online gambling, namely New Jersey, Nevada, Pennsylvania and Delaware, seem to be waiting for major changes in infection rates or deaths to even consider opening. Of those four states only Nevada seems somewhat anxious to get going again although Governor Sisolak said he was not going to reopen the hotels and casinos until it was absolutely safe and right now, they are clearly not ready. The city of Las Vegas, however, is another matter.

The Mayor of Las Vegas, Carolyn Goodman, made news by going on various shows and saying that she was willing to let the city be the testing ground with no restrictions in place. When pushed back by Anderson Cooper on the laissez-faire response, Goodman replied that she was willing to let Las Vegas be the control group and if people die then she will be proven wrong. "We have no problem being the placebo" was her exact reply. As well when Cooper showed her a report from China on how the virus can spread in a restaurant, Goodman said "that's China, this is Las Vegas." Fortunately for Las Vegas residents Goodman does not control the casinos or the strip and it appears that those who make those decisions want much stricter controls put in place in the casinos and a decline in positive COVID-19 cases before even considering reopening.

New Jersey, Pennsylvania and Delaware, however, have been in no rush to reopen since the positive COVID-19 cases in that state are still increasing and also because they are still making money from online casinos and poker. Pennsylvania online gambling increased by over 25% in April and is expected to be higher in May and New Jersey online revenue was said to be almost double what it was prior to the declaration of COVID-19 as a pandemic. And one Pennsylvania native has said he’s seen an unprecedented amount of advertising for PokerStars and DraftKings casino on TV.  Make no mistake, all 4 states have seen huge declines in overall gambling revenue and are struggling but at least they were able to make some money unlike Arizona and Oklahoma where all forms of gambling except tribal casinos, lotteries and some racetracks are legal. That brings up the question as to why states are continuing to resist the option of online casino gambling. There is no question that gambling can be addictive, which is generally the reason some states have chosen to limit the amount of gambling available, but the current lines at land-based casinos are proof that people want to gamble. And, whether it’s to have fun or perhaps to feed their addiction, they will find a way to do so regardless of the state laws. It should not be surprising that offshore gambling sites have indicated that a large percentage of their customers are in states like Arizona, Hawaii and Texas, where residents there have no real way to legally gamble and neighboring states that offer gambling have said that a large number of clients are from out of state. For example, in Texas there are daily bus trips to Louisiana or Oklahoma casinos and on any given day the Coushatta Casino in Kinder, Louisiana and the Winstar World Casino in Oklahoma have at least as many cars with Texas license plates as they do plates from their own state. And despite being the most conservative state in the U.S., with absolutely no gambling whatsoever, Utah residents make regular trips to Nevada to gamble. Not allowing other forms of gambling only leads to people taking risks to play, whether that entails gambling with unscrupulous offshore website, betting with underground bookies, playing in illegal games often run by mobsters and yes, lining up with no social distancing during a pandemic.

But the question can also apply to states that have other forms of gambling but not online casino gambling. What exactly is holding those states back? When New Jersey and Pennsylvania open up their physical sportsbooks there is no doubt that residents of New York City will line up to play, and undoubtedly the numbers from New York may be even higher than residents of New Jersey or Pennsylvania, because unlike those residents, New Yorkers currently can't bet online. For the 29 states with tribal casinos, they will likely have to rewrite the compacts to ensure that the tribes get a fair portion of online gambling revenue, but given the pandemic what better time is there to address that than now?

What about the other states?

Utah, Hawaii and Alaska, Georgia, Tennessee, Kentucky, Nebraska, South Carolina, Virginia and Vermont do not have any casinos although Virginia and Vermont are considering it but that still leaves seven states that are not tied to the tribes and do have casinos and other forms of gambling and thus have no viable reason to continuing to deny their residents the option to wager online. Illinois seems to be relaxing their grip on gambling as they have been appointing more liberal governments and are leaning to legalized online gambling and Missouri and Ohio likely want to continue promoting their riverboats. But even after the pandemic is over, how likely are residents going to cram into a riverboat? West Virginia and New Hampshire will undoubtedly only offer the product if it can be run through the lottery corporation, but that shouldn’t be an issue. In Canada, the lotteries control all online gambling and the same holds true in France. And as for the last two states, namely Rhode Island and Maryland, there are no excuses whatsoever to deny online casino gambling. They already have casinos and no moral objections to gambling, so it’s time to allow gambling online, as all their neighboring states do.

These are trying times and governments and individuals are learning a lot. There is hope that a vaccine will bring things back to normal, but that vaccine could be over a year away. Moreover, it is unlikely many people will want to be among the first vaccine candidates and there is no assurance that COVID-19 won't mutate requiring another lockdown. What we have learned for the most part is that people want to gamble and if given an opportunity to do so, they will take risks to place their bets. But today, in states where online casino gambling is available, it has been shown that players can be closely monitored to ensure all rules such as problem and underage gambling are addressed, and of course it provides continued revenue to the casino operators and governments. Thus there is really no justifiable reason to continue opposing it. The 2011 DoJ opinion legalized online casino gambling and it’s unfortunate that so many states are not implementing it. Ironically when Jon Kyl first introduced his Internet Gambling Prohibition Act, he made the comment that it had to be banned because "it's not safe."

My comment to that today is this: With people taking risky chances to gamble during a pandemic, please define safe.