Apparently the excitement of the match-up in college football isn’t good enough anymore and since the NFL has told the networks to avoid point spread chatter, the broadcasts have turned to NCAA football to note line moves and tout ATS predictions.

Without mandated NFL restriction, ESPN and other networks are rejoicing in new legalized U.S. wagering for college football

Whoever forwarded the edict that new legalized U.S. sports gambling is not to be referenced or at least modified must have forgotten to send the memo to networks regarding college football.  From what we’ve seen thus far, every Saturday is a virtual free for all involving point spread predictions and totals advice on a dozen related networks.

The bill’s author was legendary Princeton University and New York Knicks star “Dollar” Bill Bradley, who would later serve as a three term U.S. Senator from New Jersey.  PASPA is also known as the Bradley Act.  Most recently he targeted the reversal of PASPA as a colossal mistake saying “each state will have its own (gambling industry). Now you can bet on high-school games. You could bet on AAU games with 14-year olds. You can bet on college games. There’s no prohibition whatsoever.”

Even though Senator Bradley might have been exaggerating, he likely would feel vindicated if he turned on the television for Saturday’s focus on college football. Starting after the 9AM ET pre-game shows, continuing around noon, and running till about 2:30AM ET, if you love college football and receive a reasonable cable package, you can watch about 25-30 games across the screen.  Of course, confessing that you’re purely watching and not betting is like saying “I go to the racetrack because I appreciate the beauty of horses”. 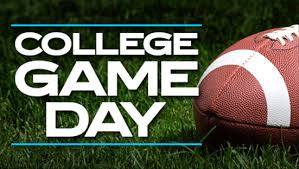 The most astonishing difference this college football season has been the overwhelming gab fest referenced toward sports betting. Equal to purring about defensive strengths and Heisman hopefuls have come “can Wisconsin overcome last week’s upset to cover the double-digit spread this week on the road against a team 0-2 ATS".  Huh?

And this talk isn’t coming from the infomercial handicapping shows we’ve become accustomed to watching early in the morning. Places where the 'Locks of the Year', steam plays and '50,000-star' specials are expected. College Gameday on ESPN is now overloading their broadcast with their predictions against the spread. Lee Corso and Kirk Herbstreit are boasting about how they fared last week with their financial wisdom to pump up the broadcast.  It’s as if the excitement of the match-up itself just isn’t good enough anymore.

If you don’t get ESPN, ESPN2 or ESPNU, no problem.  ESPN has created a special channel on Saturdays devoted to showing live scoring plays akin to the NFL RedZone.  Equipped with either your cell phone or a screen nearby, there is no way you won’t be instantly informed of the score or an “expert” recommendation on who to bet upon.

This week all eyes are upon a special U.S. House Judiciary Review focusing upon the first few months post repealing PASPA.  Prominent U.S. State Senators including Charles Schumer (D-NY) and Orrin Hatch (R-UT) are seeking to introduce federal legislation laws for U.S. sports betting.  Most crucial components include no wagering for any person under the age of twenty-one.  Also, a discussion for the controversial “integrity” fee to enforce fair play and to guard against any potential scandal or corruption.

The integrity fee was first introduced by NBA commissioner Adam Silver, then endorsed by MLB commissioner Rob Manfred thereafter as a potential 1% tax. The NHL abstained at that juncture while the NFL remained vehemently opposed to any form of incremental U.S. legalized sports wagering. Now that we’re past the PASPA reversal, the cards on the table have been shuffled with any new legislative alteration possible.

That also potentially could provide some form of cut for college athletic programs should the federal government get involved. That includes many of the all-powerful NCAA conferences that have driven revenue and gained political force over the past decade. The SEC Network, the Big Ten Network, the PAC-12 Network and so on have created their own cable and satellite networks with creative leverage.

If you really want to zone in on gambling references involving football games, check out these broadcasts.  Yup, it’s all about that integrity.  And by the way…. aren’t about 90% of students that go to college twenty-one or younger? Go Team.

On NFL Media Day in late August CBS Sports President Sean McManus issued a press release that all announcers were given a statement “not to reference point spreads, teams covering the spreads, etc. during their upcoming broadcasts”.   The other networks have followed suit and have subsequently also been warned by NFL Commissioner Roger Goodell.

The good news is that thus far NFL ratings have been about even with last season, meaning there is no need to rock the boat or make any changes.  As if the NFL still didn’t really read the newspaper back on May 14th.

But look out and mark your calendar for mid-March 2019.  That’s right, March Madness time.  If you thought it was ultimate madness before, just wait till NCAA College Basketball tournament time this season. Will anybody on ESPN be talking about zone defenses and four-year starters?  Not when everyone would rather know about potential outright underdog winners and double-digit locks.  How is Dick Vitale against the spread?  Guess we’ll be finding out, baby!!