Does Floyd Mayweather Ever Lose Inside or Outside of the Ring?

Floyd Mayweather Jr. publicized giant five and six figure bets on the NBA playoffs and boxing making it look like he never loses.

Doesn't everyone have an "Aunt Mary" or sister-in-law that brags to you at family gatherings that she won $500 playing slots in Atlantic City or copped $700 in Las Vegas along with two free drinks? You get the feeling what am I doing wrong and why should I be hitting the alarm at 6AM going to work for a living. After all, Aunt Mary never confessed she tapped out in 15 minutes and then hit the casino ATM, which charges $10 fees at mega-interest after she blew two c-notes on penny slots.

That doesn't make for a fun, sexy story. And neither does the super-hyped tale that when Floyd Mayweather Jr. loses one of his famous giant sports bets it gets printed in a newspaper or splashed on the Internet.

"Money" as he's best known has been getting more publicity lately for his exploits outside the ring in Las Vegas than inside the MGM Grand. After dispensing Manny Pacquiao on May 2nd while the world moaned in collective $100 pay-per-view boredom, Mayweather has since been increasing his multi-million dollar winnings by proudly displaying his wagering talents again. You would think that after tucking his $50 million dollar paycheck under his arm in an ESPN interview, he would then head off to the poshest island on Earth to relax and savor his uhh..hard-earned success. Think again, as we should know by now what makes "the money man" tick. 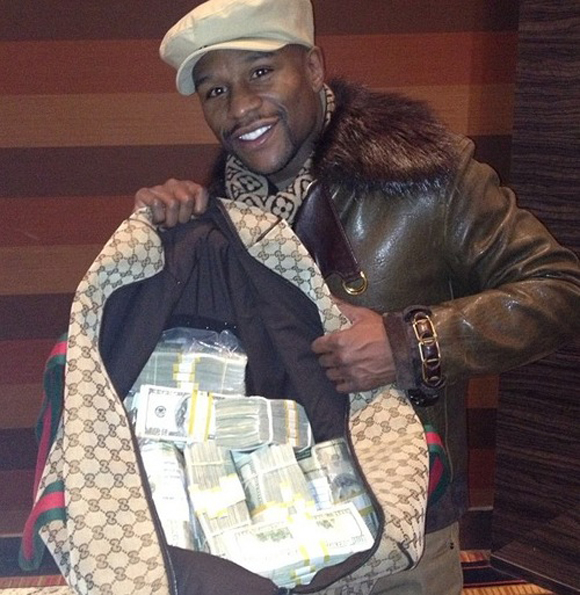 Floyd Jr. stayed right at home in Vegas to publicize his giant five and six figure bets on the NBA playoffs and incredibly included betting boxing for the world to see. And this certainly is not the first time we've seen this. In fact, it's become sort of a ritual we've come to expect. Critics argue that is what makes him great. It's not the cash that motivates Jr. but proving how smart and driven by success he is. You can decide, but compare this situation to a few of our favorite recent targets and gambling figures in sports.

It seemed recently like Floyd Jr. used a PR agent in taking "selfies" with winning tickets for $50,000-$150,000 on NBA playoff games. A Las Vegas book even took bets for an insane $150,000 on SECOND HALF ACTION for a Hawks/Wizards game. Do you actually think these books take this kind of giant play, knowing they're dealing with a traditional "sharp" who is listed to consistently beat them? As Charlie said to his brother Raymond in the movie Rainman, "Casinos have rules. Rule One: they do not like to lose".

Stunningly, one of Floyd's proudest bets was betting on pro boxing itself. Again, is boxing still considered a sport or have any governing body whatsover? During that same weekend he cleverly wagered $50K to win $115K that the Monroe-Golovkin lightweight fight wouldn't go 5.5 rounds (under). Without suspicion and total betting skill, the referee called the fight 15 seconds before the time alloted. You might think this guy goes undefeated at everything. Or like Aunt Mary, we only hear about the winning tickets.

I realize Mayweather wasn't betting on his own fight, but is this a good idea to help the sport? I can't see Tom Brady or any other football player posting pics on FaceBook or creating YouTube videos about how great they are betting football. Or simply have any athlete ever show up in a casino to bet any sport.

It's also easy to conjure up the easiest comparison. A rose by any other name or namely Pete Rose. I am sure Pete had his share of hot streaks but was more known overall to be a poor gambler, whether at betting baseball, football or horse racing. He never had the ego luxury of posting his big wins online. Instead he was forced to hide them, especially within baseball, which will seemingly cost him a lifelong & beyond ban from the Hall of Fame. Overall, it's likely Pete was a great customer for many casino outlets besides private outlets, for sure.

What Happens in Vegas, Plays Everywhere

Mr. Money almost seems like an American Express celebrity commercial for Las Vegas sportsbooks. Nothing stays there for long when there's a private plane offering Wifi access. Come to Vegas and we'll accept the largest wagers possible on anything without ever changing the odds on you.
Ironically, though they're often universally criticized it doesn't work that way in a more financially sane and responsible offshore sportsbook wagering world. Even the largest and most respected offshore sportsbooks including Bovada, BetOnline and BookMaker would hardly accept these wagers for obvious reasons.

First, they do not have the luxury of "laying off" enormous wagering action among corporate properties similar to a Caesars or MGM. Nor have the exterior cooperative network of friendly, competitive sportsbooks as an ancillary choice. Most obviously, they cannot absorb mega losses to celebrities or high-rollers without the bonus of other commercial opportunities to gain business advantage.

So just how far will this go in the future? What is the ceiling on how large Floyd's bets will become? It's likely the publicity is overall good for Vegas business and the year-end bottom line is worth the price of a good weekend winning streak or two. But it's a lock "Money" is losing some large bets that don't get posted online before they're ripped up and thrown in the trash.

Stay tuned for this one. It just doesn't feel like it's going to have a happy ending. I suppose it's OK for now, watching for his next bigger and bolder winning tickets online on the NBA Finals. We know he'll be front row in Oakland and Cleveland. Wonder if Floyd is into six figure Fantasy Wagering? Uh oh...

Glenn Greene covers the games from a betting angle every week exclusively at OSGA.com. For weekly betting insights from Glenn, click here.