Betting the NFL - By the Numbers

Glenn takes a look at 'key numbers' in the NFL and ways to use the lines to your advantage when placing a wager.

I've always been fascinated by numbers. And no doubt I'm not alone as gamblers being the most superstitious group on the planet have a very religious addiction to lucky numbers, unlucky numbers, number combinations, consecutive numbers, etc. On my to-do list is reading a book about Chinese numerology, which dates back thousands of years. But I'm a bit afraid as it might get me more hooked on believing in their power.

In sports, we revere numbers in both uniforms and statistics. Number 3 means Babe Ruth and 714 the number of career home runs he hit. 23 means Michael Jordan, 13 Wilt and 33 Kareem. 56 is Joe DiMaggio's hitting streak. In football 16 is Joe Montana, 34 is of course Walter Payton and well, 32 is O.J. Quoting numbers could make for an interesting game for hard-core sports fans.

But in gambling it could be a blessing or a curse to study numbers, especially in NFL wagering, where a huge majority of games fall so close to "the number" or point spread. Not nearly proven as prevalent in college football betting, I've discovered through experience that paying attention to a final point spread can be an indicator of who to bet upon. Not a dead certain factor to rely on, but a great confidence boost, helping to make a decision. The following are some interesting "flags" to look out for when perusing through the lines on an average NFL Sunday. 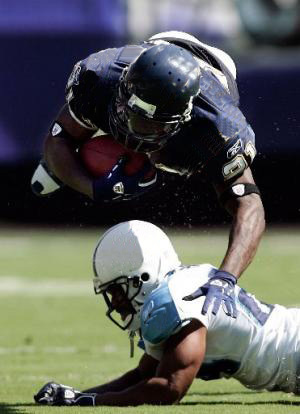 First, let's point out that unlike crazy NCAA College Football lines, where on Saturday you might find an Alabama or Ohio St. favored -47.5 against Division IAA opponents, it doesn't work that way in the pros. In fact, it's semi-rare to see more than a game or two in double-digits per week. And even there, -13 or -14 being a maximum number. Wait until Week 10 perhaps until we may see the Browns +18.5.

A -3 digit (or commonly known as a field goal game) is the most popular spread in the NFL. Indicating the most competitive and unpredictable game between two evenly matched teams. The "home field" advantage has proven to be the most overrated handicapping factor overall in the last ten years, with more away teams gaining a cover win. The "3 points for home field advantage" may be the reason why. Therefore, it is a very good practice to seriously consider an away team getting +3 with many of these choices winning outright. Another bonus if you want to play the money line to win extra dollars.

Even more reliable is when a team is favored by -2.5. That is a really negative confidence flag potentially backing the favorite if they are reduced from -3 toward kickoff time. I strongly like +2.5 in this situation, if I was intending to wager upon that team.

Ironically, the other pattern often develops when favorites are bet from field goal favorites to -4 or further to -5. Four is not an unusual number as many games are decided by four points. Think 21-17, 28-24, 17-13, etc. The result being from a successful touchdown and extra point minus a field goal (7-3 = 4). Several top online sportsbooks, including Bovada, BetOnline and Diamond Sports, often shy away from that -4 number if possible, preferring to stay with -3.5 unless bettor action demands it. Of course, no one wins on a push.

Without retrieving data on this, in a larger than usual amount (compared to +2.5 or -3), FAVORITES at -4 and -5 seem to cover the spread. This is of course, not infallible but simply an indicator to watch for. And -5 is truly a positive number for favorites and a nice number for teaser bettors more so, as an opportunity to get an out-right win candidate at +1.5 with 6.5 teaser action.

A nice NFL number to look out for is -6. Similar to -3, a better opportunity to play underdogs at +6. These teams are usually on the road, possibly weaker in reputation to their opponent or have come off a poor performance. Home dogs +6 definitely have the poorer record and are not expected to win the game.

The surprise here is these games can be very competitive and a reasonable opportunity to make a confident underdog play. Also a possibility as a reasonable longshot chance to hit a lucrative money line score, forgoing the points to play straight-up.

A HUGE DID YOU KNOW. Of the 48 NFL games played in the first 3 weeks of the NFL season only 4 games overall have even mattered to the point spread! Meaning four games that the favorite won but did not cover. And 16 of all games or roughly one-third have been decided by four points or less. Meaning that playing the money line, especially in the many "small number" lines (6 points or less) can be very rewarding. And obviously to those brave enough to back the underdog. But not to get carried away here backing dogs, favorites and underdogs are about dead-even thus far at 25-23.

Not many games in the NFL fall into the double digit category. Usually the majority as the season progresses involve established weaker teams and favorites with playoff motivation. Thus far double digit spreads are also even at 2-2. There isn't much of a comparable factor in play here except to say using favorites in teaser situations falling below four points are strong considerations.

A great habit to fall into is using the always changing "wagering tracker" available at popular bettor website Vegas Insider. That can provide a better perspective into the best opportunities that can come paying attention to these "magic numbers" in select NFL games. Especially toward kick-off time, many of the more preferred 'recreational' sportsbooks like Bovada or Bethoenix can show where much of the public money is headed. We can't repeat and say enough "the number ALWAYS tells you something".