After years of ariring the World Series of Poker on TV, ESPN finally got it right in 2015.

Since its inception the World Series of Poker main event has attracted some attention and the final table has been available on TV in one form or another. However it was only around the turn of the century that the public really took notice of the event. Prior to the 2000s the event mostly consisted of rich professional players that paid $10,000 to enter and the event capped off at about 300 participants at most, with many events attracting less than 200 players. Moreover for a while the only ones allowed to participate were those who were invited, such as Doyle Brunson and Stu Unger. In about 2000 the event was opened up and newly formed online poker sites started offering satellites which allowed people to win a seat at the main event by winning tournaments with a small initial investment. It was about the same time TV poker became more popular, thanks to the invention of the hole cam, which allowed viewers to see the cards that players were actually holding. But the big change that generated more public interest in the WSOP occurred in 2003 when Chris Moneymaker won the event and $2.5 million via a $39 buy in tournament at PokerStars.

Moneymaker was a novice at best and his win signalled that anyone, regardless of prior success, could compete in the WSOP and win with some luck. Following Moneymaker's win, more players started entering the main event more often than not by way of online satellites and Greg Raymer, another amateur, won the event in 2004, followed by Joe Hachem, another unknown who won his way into the World Series thanks to a PokerStars satellite win. The new success and interest in the event was noticed by all casinos and in 2004 Harrah's bought the rights to run the WSOP and the event has been held at the Rio since. After Raymer's win the field sizes increased substantially with a record 8,773 players taking part in 2006, with the first place award going of $12 million going to Jamie Gold. In October of 2006, however, the UIGEA was passed and online poker sites were no longer allowed to enter players directly into the tournament. As a result the number of satellites decreased and the number of entrants declined, although the number has not dipped below 6,000 participants as players found other avenues to enter. 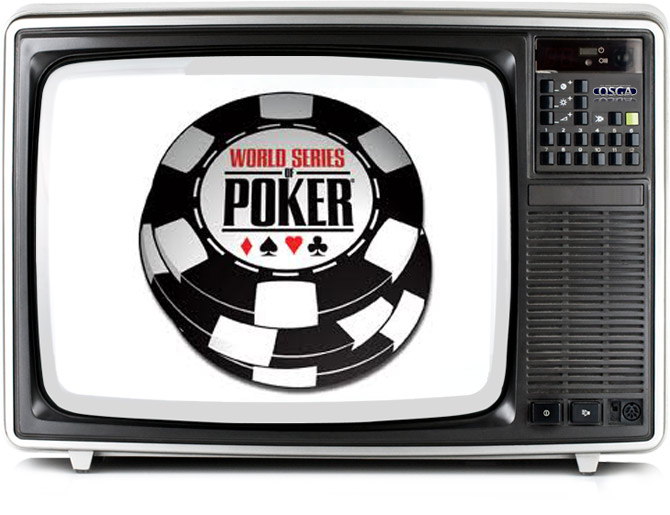 Despite the interest and success of the WSOP, Harrah's (Ceasars Entertaiment) and ESPN have struggled to find a good format that would entice the public to watch the event on TV. At first they simply aired the final table of the tournament without use of the hole cam, but not surprisingly that was like watching paint dry and viewers quickly tuned out. More concerning, because there was no break between when the qualifying tables finished and the start of the final table, viewers never got a chance to really know the participants and their stories, so they simply couldn't identify with the final table each year which generally consisted of amateurs or unknown professionals. As a result, in 2008 the WSOP decided to postpone the final table until November. The tournament ended in July, but the 3 month hiatus allowed ESPN to show all the qualifying games up to that point, including the hole cards, and coverage on TV and in magazines allowed the public to get to know the participants at the final table more personally. As a result the hope was that the public would watch, since they now could identify with the players. Not surprisingly many of the professionals were upset with the decision, saying the delay interfered with the integrity of the event, but others simply accepted it, realizing the event had changed to more of a spectacle. The fact they were guaranteed to be a millionaire regardless of where they finished didn't hurt either. The delay also allowed the less experienced players to get some help from professional coaches who could point out their flaws and make them more competitive at the end, it could allow the final 9 to arrange sponsorship agreements and it allowed family members and friends to attend the event and add some human nature to the program. The idea was worthwhile but it wasn't without flaws.

First, to ensure the integrity of the event, the final table was aired without the hole cards being shown, which as mentioned earlier was not ideal for viewers, and more concerning, the event went on until the wee hours of the morning, which was fine for those on the west coast but for people in the east, they couldn't justify staying up until as late as 6 a.m. to see the eventual winner. As a result viewership was not as high as ESPN had hoped. The WSOP's solution in the following years was to air the event including use of the hole cam with a delay until the tournament concluded – usually the following day. This allowed them to edit the coverage as well so it wouldn't end so late (or early). The problem with that of course is that the public already knew the winner, thanks to news coverage and social media, so most couldn't be bothered to watch an event where they already knew the outcome, plus many already watched the event online without use of the hole cam from sites which aired it, often illegally.

As a result of these issues the networks realized they had to show the cards in order to get any interest but they also couldn't delay it too long or the public would lose interest. The solution was an hour telecast delay (later changed to half hour) which seemed to satisfy everyone. The problem of course, is that people in the audience relayed the play of the other competitors to the players they were rooting for as they watched the event on TV which many felt impeded the integrity of the event. However, players at the final table just accepted this as a concession for being able to play in the richest poker event in the world. But the networks still had the problem of the event running on forever so the networks decided to run the event until only 2 players were left (later 3), with those players competing on the next day.

This worked somewhat, although the event on the first day still ran on too long. So this year the WSOP decided to make it a 3 day event, with the field being cut from 9 to 6 on November 8th, then to 3 on November 9 and the final 3 coming back for the one day playoff on November 10. And finally the WSOP hit a home run.

The event was very watchable and the starting times for the tables were slowly increased each day to reflect the number of entrants and the blinds. Each day the coverage ended before midnight Eastern Time and ESPN did an excellent job making sure that the stories of each competitor were told so that the public could identify with them. Neil Blumenfeld became almost a fan favorite thanks to his 61 years of age, his unlikelihood of making the final table and coverage of his crazy wins, while Joe McKeehen, Max Steinberg and Joshua Beckley were shown with their quirks, their play throughout the qualifying rounds and family life, so the public could continue to identify with them. As well for worldwide watchers not from the U.S. betting on the event was still made available offshore at sites like Bet365 and Betfair throughout the night since the half hour delay made it feasible to offer wagering, particularly when the delays in between rounds were taken into effect. The commentators also did an excellent job indicating the right plays and the bad moves which the public looks for to help them improve their game. This is particularly important with many states preparing to offer online poker and with PokerStars preparing to start up again in New Jersey in January. And ironically the final 2 players (Joe McKeehen and Joshua Beckley) are from the New Jersey area.

McKeehen dominated the final table en route to his $7.6 million dollar win. And the final move the WSOP is to be commended for was finishing the tournament on Tuesday rather than Monday, as they had been doing in the past, which avoided the conflict with Monday Night Football.

This year's event was enjoyable, well played and because of the timing it was reasonable for any poker fan to watch until its conclusion, regardless of where the viewer lived. The WSOP in 2015 hit a home run and have come up with a format they can adapt for the foreseeable future.