Germany seems determined to restrict online wagering to sports betting but their licensing situation is far from resolved and nothing is moving forward.

One of the more interesting global stories OSGA has been following the last few years involves the country of Germany and the northern state of Schleswig-Holstein. For those unfamiliar with the situation here is a summary.

Until 2012 the only legal forms of gambling in Germany were horse racing, land-based casino and sports betting (which was controlled by the individual states) and the national lottery. Online gambling was technically illegal, but nothing was done to stop it, so German citizens were playing with casinos and sports books based elsewhere unabated. Consequently, in an effort to create some clarity as to what could legally be bet on by German citizens online, the German national government decided to create a new interstate gambling treaty that would regulate online betting. The country indicated they were most concerned about problem gambling, fraud and betting by minors and felt the best way to ensure these issues wouldn’t materialize was to limit online gambling to sports, which they believed was less addictive than casino and poker. Online casino betting would remain illegal under the treaty.

While those were the stated reasons for restricting betting to sports, most analysts agreed that the real reason the country limited the licenses to sports betting was pressure from the state governments and lotteries, who were worried online casino betting would cannibalize their other gaming revenues. The national government in Hesse which was responsible for the creating the new treaty said it would accept applications from all companies for a sports betting license and would choose 20 that could operate legally. Any other company not chosen would be declared as illegal gambling and would face hefty fines and possible imprisonment if they still catered to the German market. The government also planned to force Internet service providers (ISPs) to block gambling sites not given a license. The treaty charged a 5% turnover tax to be paid by the successful licensees which amounts to a tax on gross profits close to 40%. Originally the tax was set at 16% but the gaming companies said if it was that high, they couldn’t be profitable. So, the tax was dropped considerably. In 2014 the national government chose the 20 licensees, which included 16 German companies and 4 from the rest of Europe.

Schleswig-Holstein decides to opt out

Fifteen of the 16 German states agreed to abide by the new treaty, but the northernmost state, Schleswig-Holstein (S-H), saw an opportunity to benefit from the restrictive treaty rules and said they were opting out of the interstate treaty and instituting their own online gambling rules instead. The ruling government at the time in S-H was the Christian Democratic Union, which is more right-wing and libertarian than the Social Democratic Party, which tends to want more government control over social issues. 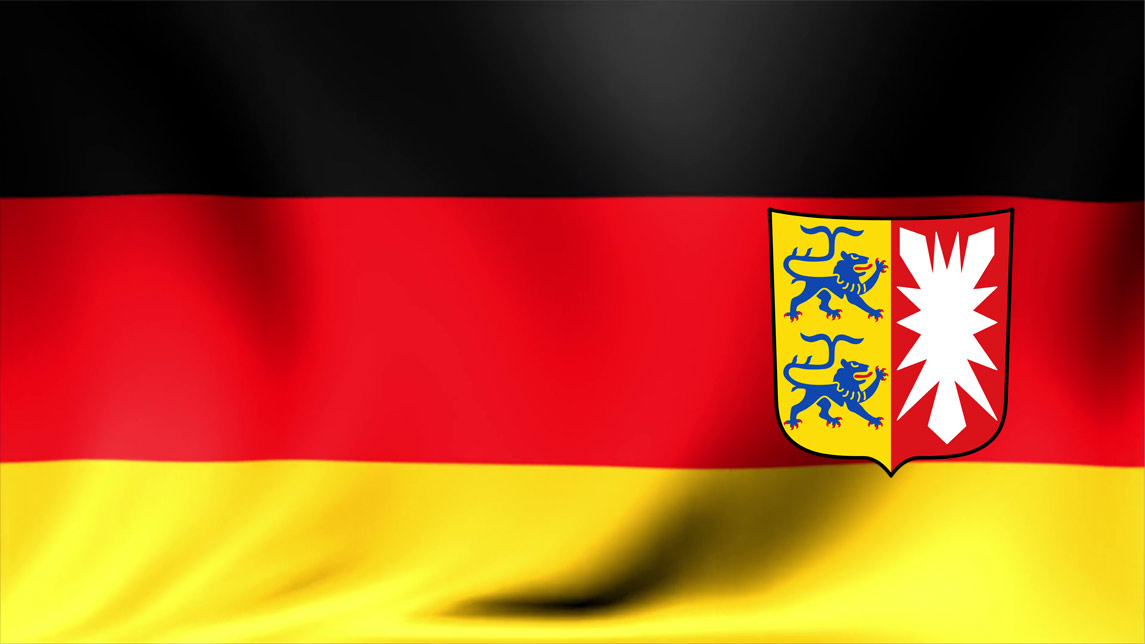 The European Commission agreed that it was okay to have two systems in one country, so Schleswig-Holstein decided to issue unlimited licenses for online gambling that included sports, casinos and poker and they charged a 20% tax on gross profits, which was much more acceptable to gambling companies than the  5% tax on all revenue under the German plan. S-H issued 25 sports betting licenses and 23 casino licenses which were good for 5 years to various companies including popular sites which were shut out in the German license process, such as PokerStars and Bet365. The national government seemed prepared to challenge the decision of S-H to go rogue in the courts, but in June 2012 an election was held, and the Social Democratic Party won the vote and the new leader Torsten Albig said he would abide by the German interstate treaty. Albig also said, however, that he would honor the licenses that were granted previously in Schleswig-Holstein, since breaking them could involve very hefty fines and lawsuits.

The German national government has never been able to implement their treaty, however. After the EU received several complaints by those who didn’t win a sports betting license, the EU reviewed the process and said the selection criteria and limit on licenses violated EU rules and must be changed. As well, a couple of German courts criticized the selection criteria and ruled the process unconstitutional and told the government to start over again. The German national government did cave a little and said they would agree to allow all those who applied for a license the first time to get a temporary sports betting license, but new companies would have to go through the whole process and, unless there was a valid reason, they would be shut out. This too was shot down by both the EU and German courts, so the national government announced that it would agree to allow an unlimited number of sports betting licenses.

All 16 state president ministers agreed to the change, but the German Sports Betting Association said the rules set forth in the treaty did not meet the realities of sports betting, since the rules disallowed in-play wagering and created a weekly wagering limit of 1,000 Euros, which they deemed so immaterial that it would just encourage people to wager illegally. As well a new German Online Casino Association (think anti-RAWA) was set up and headed by Tipico (formerly Bwin.Party) and William Hill to demand that the country consider online casino betting as well. The national government said it was willing to study other European markets in that regard, but to date has not agreed to lift the restriction to limit online gambling to sports. In the meantime, Schleswig-Holstein elected a new government in 2017, (just before most of the licenses were set to expire), which ousted the Social Democratic Party and brought the Christian Democratic Union back into power. And one of the first actions by the new CDU leader Daniel Günther was to announce that the state will not abide by the German interstate treaty after all and later said it would extend validity of the casino licenses until 2021.

Frustrated by the inability to create regulations the national government has created a temporary treaty that was agreed to by all 16 states. If that treaty moves forward, then the country can start issuing sports betting licenses by January 2020 that would be valid until June 2021. As well the treaty would permit Schleswig-Holstein to operate as they have until 2021 provided they don’t market the online casino products to other states. The government has also agreed not to prosecute companies that are catering to the German market who don’t acquire a license before 2021 so long as the betting is only for sports and those companies pay the tax to the national government. The only stipulation in the interim treaty is that companies applying for a sports betting license (all previously agreed to licenses are moot) cannot be connected to any company offering casino games to German citizens.

The reason June 2021 is significant is that the national government has created that date as the time when a new permanent national treaty would be adopted and ratified. Most analysts, however, call the stopgap treaty a waste of time saying its only purpose is to give the national government an out which will stop them from looking weak to the voters and state leaders since they have been thwarted at every attempt to initiate a treaty that was agreed to over 7 years ago. And since the new licenses are only good for 18 months and will be replaced with a whole new treaty in 2021, it’s unlikely any rules created under this temporary treaty will ever be able to be implemented anyways. Moreover, this new treaty isn’t really sitting well with anybody.

The German Sports Betting Association is unhappy with this temporary treaty because it doesn’t address the issues they have regarding in-play wagering and betting limits; the German Online Casino Association is unhappy that the country is still trying to block online casinos; also they argue that requiring new sports licensees not to have any connection to online casinos eliminates the majority of operators from applying, including William Hill, Bet365, Tipico, Flutter Entertainment etc.; the EU is unhappy because the treaty is still in violation of EU rules, which require Germany to open its market to all European casino operators and cut out many of the restrictions it has indicated it will create under the rules, including the limitation to sports only; and the states and lottery are unhappy because the new treaty does nothing to stop foreign companies from catering to the German market in the interim (even if it is just with sports betting), which they contend is eating into their revenues. In fact, most non-German companies are still paying tax to the German government for their German facing revenues which the government is happily accepting and using.

As a result, most in the industry feel the only viable solution is for the national government to scrap this stopgap treaty and  and move up the plan for June 2021, which is to have all states submit proposals for how they would like to see a new permanent online gambling treaty created and implemented, including rules and enforcement options. Some states have said they want to include an option of whether to allow casino gambling in their state to go along with sports betting, but the German Interior Minister seems to be opposed to that and said he is willing to create a national law that all states must abide by if there cannot be a consensus on a sports betting only law. The problem is that if casino gambling is not included, it could still be in violation of EU rules which would make any new law a no go.

A Familiar Story with Online Gambling in Germany

So, what is old is new again in Germany. The country seems determined to restrict online wagering to sports betting, although doing so will apparently be in violation of EU rules and the requirement to force any new sports betting licensees to have no affiliation with casinos is simply a way to get the likes of Bet365, William Hill and PokerStars out of the equation and effectively restrict the licenses to the 20 or so companies they wanted to license in the first place, since they only deal in sports betting. And Schleswig-Holstein is still happily taking revenue from the online casinos and sportsbooks they licensed and will no doubt thwart any attempt by the national government to stop them, unless the rollercoaster of election wins in that state sees the Social Democratic Party win power again in the 2021 election.

But one thing is certain, very few in the government or the German gambling industry are happy and there is no clear solution in sight. One cannot help but think about the ongoing fight in the state of California for online poker between the government, the tribes and the racing industry that has seen the issue result in a stalemate for over a decade now when looking at the situation in Germany today. In both cases stubbornness, greed and distrust has led to a situation where nothing is moving forward and there are no winners.