The inaugural Pegasus World Cup features California Chrome in his last race and the hope is that this generates some renewed interest in the 'Sports of Kings'.

While there hasn't been as much buzz for this Saturday's Pegasus World Cup as the horse racing industry had hoped, there is no doubt most horse racing fans will tune in on race day to see if California Chrome can end his racing career with a win.

The Pegasus World Cup is the latest attempt by horsemen to help redefine and expand interest in horse racing throughout North America and in this instance to make the product more viable for track owners. The race, with a purse of $12 million, will be the richest race ever run. It will be raced over 1 1/8 miles at Gulfstream Park and pits a rematch of the Breeders Cup Classic where Arrogate beat California Chrome in a thrilling finish. In fact, the race is such a mismatch that Keene Ice is the 3rd choice in the morning line at 12/1 odds!

The Pegasus World Cup was the brainchild of Frank Stronach, who hoped to create a race where horse owners effectively "owned the whole race" and the tracks were just the land holders and onlookers. The race only allows 12 horses and each owner paid $1 million for a place in the race. Each of the owners (or as Stronach preferred to call it, spot buyers) had the option to keep the spot for themselves, sell or lease the spot to other entities at cost, partner with other horse owners or even sell the spot for a profit if there was enough interest from another owner with a spectacular horse. The option to own a spot and sell or lease it is unique and has no precedent in racing history. In addition to prize money from the race, each spot owner gets a twelfth share in the net revenue that the race generates in wagering, sponsorships, and media rights. TV revenues were not included this year, but are expected to be negotiated in future races. Most importantly to the owners the initial investors have also been given the right of first refusal to buy a berth for the race in 2018 and that is likely to continue until such a time that an investor no longer wants to pony up the money (pardon the pun). 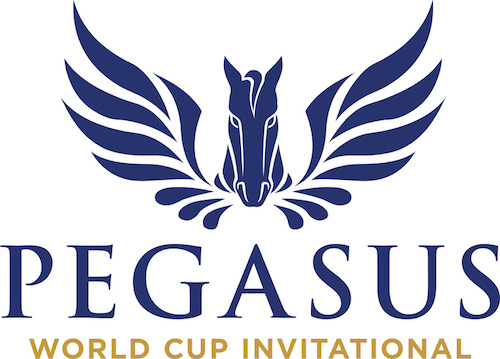 As a rule, for stakes races, including the Triple Crown races, owners typically are required to pay a small fee a year in advance of the race to declare a horse and pay additional installments at set levels until the final installment is due a few weeks before the race. The total paid usually amounts to about 2% of the total purse. Anything over and above what is paid by the fees is provided by the racetrack. But because the purse of the Pegasus World Cup is $12 million, with each owner contributing $1 million, there is nothing the racetrack has to add. The purse distribution calls for $7 million to be given to the winning interests, $1.75 million given to the 2nd place horse interests, $1million to the 3rd place interests and $250,000 to the remaining interests. So, while owners are usually offered almost a 50-1 return on their investment for winning graded stakes races this race only offers a 6-1 return for a winning entry and less than even money for the second-place horse. That is a reason many industry analysts were skeptical that the idea would pan out.

But they were wrong.

As soon as the plan was put into gear the 12 entries were sold in a matter of days. Perry Martin and Taylor Made Farm (the owners of California Chrome) bought a spot, as did Frank Stronach and seven other individuals or groups involved in the horse racing industry. But the other three spots were bought by people not involved in the industry. Jerry and Ron Frankel (Hollywood and Broadway producers), Sol Kumin and James Covello (Goldman Sachs partner and hedge fund operators) and Dan Schafer (a pizza franchise owner) all purchased spots.

Asked why they would bother purchasing a spot without any vested interest, Sol Kumin told Daily Racing Form after the purchase:
"I think this has a tremendous amount of potential," Kumin said. "In five years, this could be the biggest race in the world. Everything kind of fits, with the date and the location. We could be looking back then saying that it was a good idea to get in on the ground floor. That's kind of the bet we are making right now."

It should be noted that Juddmonte Farms, the owners of Arrogate purchased their spot from Coolmore racing group, which didn't have a horse to run the race. Of the non-horsemen, Sol Kulmin and James Covello sold their spot to Earle Mack while Dan Schafer partnered with Looch Racing Stables to run War Story (50-1 in the morning line) and Ron and Jerry Frankel teamed up with Donegal Racing to run 3rd choice in the betting Keen Ice.

It's doubtful this venture will prove profitable for anyone but the owners of California Chrome and Arrogate, but all the spot owners contend they are in it for the long run. In a few years, many believe they'll be envied as much as original EBay and Microsoft investors who are now multi-millionaires thanks to taking a chance on an unknown commodity. Early bitcoin owners can be added to that list too.

The industry is also looking at the race closely to see if this could be an option for the future. Many racetracks are closing up or filing for bankruptcy because they just can't afford the upkeep on the tracks and pay the added money they are expected to absorb for purses, but if they can find a way to deflect some of the costs by having investors own shares in the races and simply take some of the profits from wagering, concessions and incendiary revenues such as slots then it could be a boon for the whole industry. It could also provide a good reason for smaller tracks to offer more stakes races and for larger tracks to increase purses. And almost everyone agrees that interest in horse racing peaks for higher purse races.

"There's no bigger turn off for a horse racing fan than when a card is filled with small claiming and maiden races," one horse track manager told me. "But when we have a day with 3 or more stakes and high purse allowance races the seats are packed full, not to mention the betting on the races via simulcasting. Right now, it's hard to justify putting out the purses for these 6 figure races but if the cost is picked up by the horsemen rather than the tracks then we would all benefit."

The horse racing industry is also hoping that exchange wagering, which has just been introduced in some U.S. jurisdictions recently will attract millennials as well, and the industry is always looking for innovative ideas that will renew interest with bettors. And they may be right.

There was always a belief by many analysts in North America that one of the biggest turnoffs for horse racing among young people was the requirement of pari-mutuel payouts. The argument was that young bettors couldn't be bothered betting on a product where they would wager at 5 to 1 odds and end up getting 2 to 1 or less thanks to late money. They wanted assurances of a payout. The Super Bowl currently has Atlanta as a 7/5 underdog. They know they will get that price regardless of any changes to the odds in the future. Obviously, that isn't the case with pari-mutuel wagering.

That is one of the reasons that horse racing overseas is so much more popular than in North America, i.e. the ability to get fixed odds. But even there, betting on horse racing was declining among the younger generation until exchange wagering and in-race betting was introduced by Betfair and now the interest among young people towards horse racing in the UK is at record levels. The adoption of exchange wagering and the possibility of more high purse races may not be the savior of the industry in North America but every little bit helps.

As for the Pegasus Cup, it should be a great matchup between Arrogate and California Chrome. The other horses are vying for 3rd place which would only give the owners their entry fee back plus the other ancillary revenues mentioned. This will likely be California Chrome's last race before being retired to stud and Arrogate's owners already announced that he likely won't be racing in the Dubai Gold Cup scheduled to take place on March 25th, so both horses have something extra to race for.

My hunch is that California Chrome will run a better race without the speed that existed in the Breeders Cup and will reverse the result of the Breeders Cup Classic. It will be a great race for sure and one worth tuning in to.