A look at the history of the NFL Conference Championship games and potential bets and payoffs for this weekend's matchups and the Super Bowl.

No. 1 Seeds in Conference Championship Games are 28-11

In last week's playoff games, Philadelphia was the first No. 1 seed in NFL history to be an underdog in the divisional round. The Eagles protected their home turf and grounded the Falcons 15-10 to advance to the NFC Championship where they meet the No. 2 seed Minnesota Vikings, who pulled off the late #MinneapolisMiracle to beat the Saints 29-24 after blowing a 17-0 halftime lead. That last second TD and result saw many millions of dollars change hands at the sports books as the Vikings were favored by 4.5, then 5 and closed 5.5 as reviewed in my article and Vikings/Saints match-up.

The match-ups are always important come playoff time, and defense has risen to the top for the conference championship games. In the stronger NFC, the Vikings (280/4.7 yards per play) and Eagles (305/5.0) ranked No. 1 and No. 4 in the league in yards against. In the AFC, the No. 28 Patriots (360/5.7) defense and No. 3 Jaguars (299/4.7) played weaker schedules than their two NFC counterparts, and some terrible quarterbacks in each of those AFC divisions allowed both teams to finish in the top-5 of the league in scoring defense, joining the Vikings and the Philadelphia Eagles allowing less than 19 points per game. 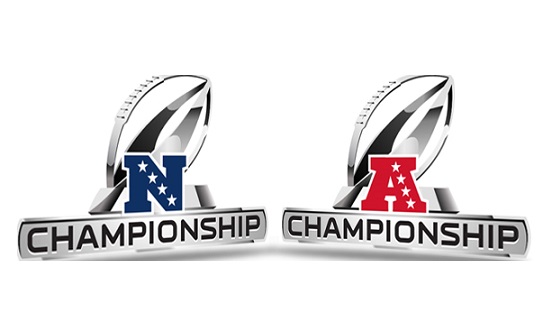 It's hard to remember a team having an easier path to the Super Bowl than this year's New England Patriots, but the defending Super Bowl champs are still not as strong as their more recent teams, with New England now playing in a remarkable seventh consecutive AFC Championship game. Going back to last season's playoffs and Super Bowl, the Patriots have now scored at least 30 points in four straight playoff games. I think that streak ends this week and definitely in the Super Bowl if New England gets there.

As mentioned, match-ups are important, as are turnovers. That's why Jacksonville was able to jump out early at Pittsburgh last week and why the Jaguars season was such a success as they had a +14 turnover differential this season while last year the Jags were -16 in TO differential and won just 3 games.

I believe the Jacksonville Jaguars have a better chance than most to potentially pull the upset, but then I have the thought of all the experience on New England, and QB Brady going against Bortles trying to win back-to-back playoff road games in colder conditions at Pittsburgh and New England against the mastermind coach Belichick. Seems unlikely, but I'll look at taking +10 if it gets there.

While many sharp bettors are lining up on the home 'Dog Eagles, I prefer the Vikings to win but have not yet laid the points (-3), as it's not my style or usually a prudent play to lay more than a FG on the road unless the match-ups and situation is more favorable. The Eagles defense is clearly strong, yet the Vikings is even stronger and more talented. The feeling is the Eagles will struggle to move the ball more, and unless they get a few gifts like the Vikings gave the Saints last week (INT and blocked punt in own territory in fourth quarter), then Minnesota will show the consistency they did all season and prevail. The Eagles were struggling throughout December despite winning 3-of-5 games and QB Wentz getting hurt, and Philadelphia was fortunate to hang on against Atlanta. The media and pundits are pointing out how lucky the Vikings were last week, but they were so dominant in building a 17-0 halftime lead and only those untimely blunders let the Saints get close enough and then take the lead late.

I don't see any strong side bets in the conference championship games, but in looking ahead to potential Super Bowl match-ups, some of the leading offshore sportsbooks and those in Las Vegas have posted advance lines. And you can put me down for the Vikings (+3) over New England if those two teams meet at U.S. Bank Stadium in Minneapolis for the Super Bowl. Leading offshore sportsbook BetOnline has the Vikings +2.5 in that potential match-up, and here are their advance Super Bowl lines and totals that you could bet this week.

I know one friend through poker and sports in Las Vegas who is still alive for more than a $400,000 futures payoff if the Jaguars win the Super Bowl. How much would you hedge this week on the Patriots money line (-430)?

The risk on betting the Super Bowl now is a key injury to a player on a team that advances in the conference championship. Clearly if QB Brady gets hurt badly and the Patriots still advance, the lines would move significantly for the Super Bowl. But I thought the Vikings were going to win the Super Bowl before the playoffs started, although my only future bet on the Super Bowl or Conference Championship was on the Eagles to win the NFC early in the season at 15-1. Looked very promising until QB Wentz got injured, which again is a risk of betting futures. But the Eagles can still deliver that payday with a win this week.

From a seeding standpoint, I've been asked about how top seeds and others have fared over the years since the second wild card was added. While it's not of much importance to me, I thought I would provide some information on how seeds have down knowing that we have both the No. 1 seeded teams hosting the conference championship games.

The conference championship games have been dominated by the No. 1 seeds when facing a No. 3 seed, going 6-1 straight up. That's the match-up with New England vs. Jacksonville. The six wins by those teams have been by an average of 8.5 points per game.

For what that history is worth, I hope you enjoy the match-ups. I'll be pulling for the Vikings to win even with a good futures payoff on the Eagles at an online sports book. I believe Minnesota can payoff even bigger in the Super Bowl on their home field in Minneapolis.