On Selection Sunday the NCAA selection committee gave preference to several less deserving teams, hurting some of the top mid-majors and smaller conference teams in the country with their detrimental decisions.

The NCAA Tournament field was announced on selection Sunday, and bettors immediately started firing away, as the leading online sports books posted the lines. Many looked at the brackets and could care less about the lower seeds or who got the shaft by the NCAA selection committee's distorted version of reality. Others looked at the seedings and have little knowledge of who was mis-seeded or got setup for a much tougher road to the Final Four. 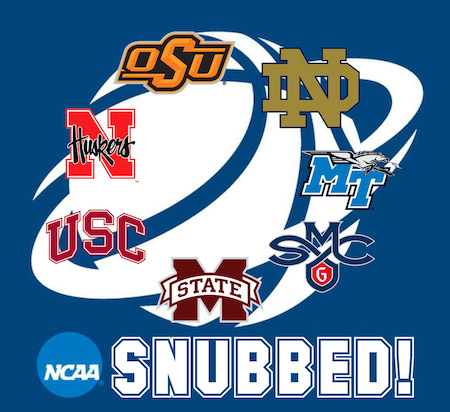 Plenty of sharp handicappers or other analysts that understand power ratings, stats, scheduling, keys to NCAA Tournament success and tournament selection factors beyond the NCAA committee's guidelines and criteria, including the new 'Quadrant system', realize that some teams got burned by the committee again. Those that were completely left out of the tournament with good arguments include St. Mary's, Southern Cal (USC), Middle Tennessee State, Notre Dame and Oklahoma State. Southern Cal (12-6) and Nebraska (13-5) made history as teams with the most wins during conference play to not make the NCAA Tournament.

The selection committee gave preference to the ACC for less deserving teams like Syracuse (8-10) and Florida State (9-9), and the Big 12 was rewarded for teams like Oklahoma (8-10) and Texas (8-10), but left out Oklahoma State (8-10), who beat both Kansas and Oklahoma twice this season and also beat Texas Tech, won at West Virginia and oh, beat that crappy-coached Florida State team on a neutral court. The SEC was rewarded with a record 8-teams in the NCAA Tournament after they sent three teams to the Elite Eight last year. Of course, supremely-coached Mississippi State (9-9) with Ben Howland drew the short stick and was left out, despite beating NCAA Tourney teams Alabama (8-10), Texas A&M (9-9) and Missouri (10-8). Mississippi State won 22 games this season, more than all three of those teams.

Is it a coincidence that Alabama, Oklahoma and Missouri all have 'star' freshman that have made headlines this year? Collin Sexton, Trae Young and the Porter brothers? The committee wants ratings and money, not the most deserving teams in the tournament. How else can you explain Middle Tennessee State being left out of the tournament? The Blue Raiders are better this year than their 12-seeded team that beat Minnesota in the NCAA Tournament last year (as a betting favorite – mis-seeded by committee!). MTSU won Conference USA (16-2), but was upset in the conference tournament in overtime. They won a nation-best 12 true road games, played a top-10 non-conference schedule and had a 33 RPI – higher than teams like Syracuse, Florida State, Alabama, Missouri, UCLA, Oklahoma, Creighton, Arizona State, Virginia Tech and one slot ahead of USC, who had a higher RPI than all of those teams as well.

Syracuse brings more fans, eyeballs and recognition to the dance than an MTSU or St. Mary's. I guess that's what matters more to the committee. Now, life is certainly not fair, and we've seen the corruption by coaches and others at the bigger power schools the past year making their own unwanted headlines. And it will come to a head this offseason with the FBI probe.

Corruption certainly happens at a higher level in our government and court systems, of which we read and hear about daily. It's not an exact science and cut and dried on qualifying teams and at-large bids to the NCAA Tournament, but the committee is really hurting teams, players, coaches, fans and colleges with their detrimental decisions and especially against the mid-majors and smaller conference teams.