The Miami Dolphins are sinking to historic levels, and closing in on point spread records

A season ago the Dolphins were celebrating the "Miami Miracle" following a dramatic play and 34-33 win over the powerful Patriots in early December. The hook-and-double-lateral turned 69-yard touchdown with no time left on the clock made for one of the most improbable wins of the season and one of the most incredible wins in franchise history for Miami. The instant classic South Beach stunner was immortalized through Twitter replays and became a T-shirt to talk about by apparel company BreakingT to commemorate the memorable and miraculous win. 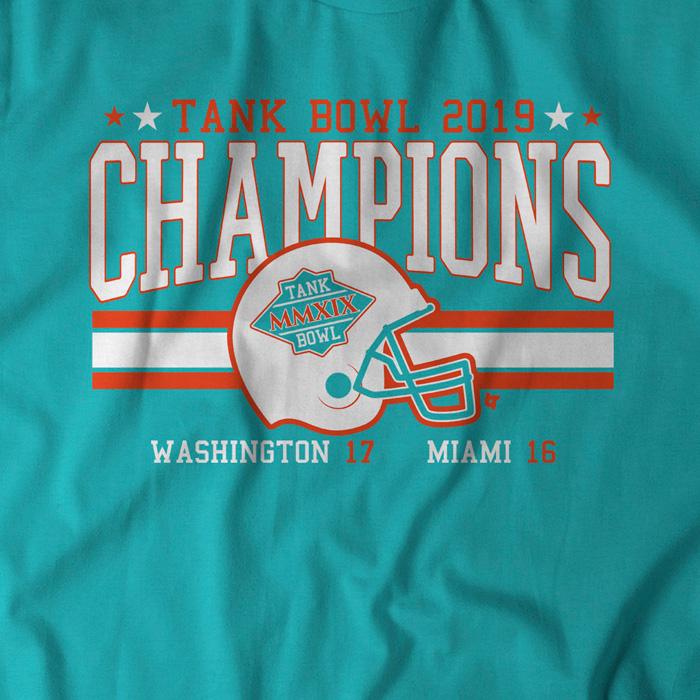 Fast forward to the Dolphins 2019 season of futility, and BreakingT is back. This time the apparel company is promoting its Tank Bowl T-shirts following Miami's 17-16 loss to the Washington Redskins to drop the Dolphins to 0-5 in the 2019 season.

"Lose to win, and no one is better at that than Miami," BreakingT wrote about its new design.

It may not be long before leading online sportsbooks come up with their own campaign and promotions for bettors to bet some money on the desperate Dolphins.

This week, SportsBetting.ag set the Dolphins-Bills Week 7 line at Buffalo -16.5. The BetOnline affiliate noted that the point spread is the largest Buffalo has been favored since 1993 during their historic Super Bowl futility days when the Bills reached the Super Bowl and lost four straight years starting with the 1990 season and 1991 Super Bowl.

Miami (+6) covering the point spread for the first time this season in a 17-16 loss to the Redskins (on a failed 2-point conversion in the closing seconds) may be cause for some celebration (for bettors). Actually, not many bettors as the Redskins were steamed and bet up on game day from a -3.5 point favorite to -6. But a last-second touchdown by the Dolphins cost Redskins spread bettors. A number of Dolphins players saw their playing time plummet against the Redskins.

The wild point spreads have had sportsbooks at odds with the Miami Dolphins, who are now considering another quarterback change back to veteran Ryan Fitzpatrick for their Week 7 game at Buffalo. Fitzpatrick relieved starting QB Josh Rosen in the 4th quarter against the Redskins and finished 12-of-18 for 132 yards and a touchdown, igniting a stagnant offense that scored its first points of the second half this season with a pair of 4th quarter touchdowns. Fitzpatrick earned the best offensive grade on the team by Pro Football Focus in defeat.

With road games at Pittsburgh, Indianapolis and Cleveland before Thanksgiving, plus home games against the Bills and Eagles (Dec 1), the Dolphins will shatter that record before their final four games of the season. If New England is playing for home field advantage and the top seed in the AFC playoffs on the final week of the season, we could see a record point spread against the Dolphins for their Dec. 29 contest.

"During the 20 years that I've been in this business, Miami is the lowest power-rated NFL team I've ever set odds for," said SportsBetting.ag's head linesman, Adam Burns.

Some bettors won with the Dolphins (+6) in a 17-16 defeat against the Redskins. While we did not have the balls to back the previous 0-4 SU/ATS disastrous Dolphins, we did manage to go 2-0 in Week 6 with our underdog picks and insights. Both the Saints and Texans were outright winners, improving our 'Dog log on the Offshore Gaming Association pages to 12-6 ATS this season and 63-33 (ATS (65.6%) the past 2+ seasons with 42 outright winners selecting only underdogs.

Only three teams have gone winless in a 14 or 16 game season. Even during the Browns historic slide and 0-16 season in 2017, Cleveland was never an underdog of 14 points or more, and only a double-digit underdog four times that season.

Bills players are aware of the Dolphins struggles. But what about the point spread?

"We don’t pay attention to the point spread, it doesn't matter who you're playing," Bills' linebacker Lorenzo Alexander said. "If you don't come in there with the mindset that you want to go out there and dominate, whether their record is 5-0 or 0-5, you could potentially lose that game."

Apparently, Bills players listen more to ESPN talking heads than read or listen to all the additional live sports betting odds and lines filling the talk shows and search engines. That's true of perhaps many sports bettors as well, much to the delight of some of the leading online sportsbooks.

"I wouldn't say guys put much stock in Vegas, they (players) put more stock into what the ESPN guys might say," Bills' safety Kurt Coleman told a Bills beat writer this week.

A look inside the numbers through 5 games this season shows the Dolphins dreadful statistics:

The Dolphins futility and lack of talent after trading away their best players brings up further discussion of whether or not a superior college team such as Alabama, Clemson or Ohio State could beat the Dolphins.

"This is always a fun water-cooler conversation, but the answer hasn't changed," Burns said. "The Dolphins would be at minimum 17-point favorites against the country's best college team. There's a massive gap between an NFL roster and a team with a few NFL-caliber players on the roster."

Some might argue with the talent level lacking on this year's Dolphins team. The Dolphins will aim to do what the Bills did last season when Buffalo became the biggest road underdogs to win outright when they beat Minnesota 27-6 as 17-point puppy (with a rookie quarterback). But Miami hasn't fared well in this situation recently, going 0-5 straight up and against the spread in its last five games as a double-digit underdog. That includes 0-3 this season with the Dolphins now being out-scored 180-42 through five games, and it took Miami five games to score their first points of the season in the second half (13 in the fourth quarter versus Washington).

In Week 16, the Dolphins host the Cincinnati Bengals at Hard Rock Stadium on Dec. 22. The Bengals are currently 0-6 and will be underdogs in each of their remaining games, except against the Dolphins. Cincinnati is a 3-point home underdog in Week 7 against Jacksonville, and the Jaguars are taking more than 81% of the early week spread bets at Sports Insights live NFL odds, which tracks consensus betting activity from seven leading online sportsbooks, including BookMaker and 5Dimes.

Perhaps BreakingT will come up with another T-Shirt and slogan if those teams remain winless into Week 16. "Hopeless at Hard Rock" could be a promotion to market the company. Or better yet, a way to sell more drinks. "Happy Hour at Hard Rock", if the Dolphins win.

I wouldn't bet on it.