If MLB season is cancelled Rob Manfred should be fired immediately

As the baseball season begins to melt down, it is time to look at replacing Rob Manfred as commissioner of MLB.

Between COVID-19 and the Astros, it's time for Manfred to go

Commissioners of professional sports teams are in a tough situation. They are hired to represent the interests of team owners, but they also must appear to be fair and unbiased when dealing with players and their unions. Major League Baseball is probably the most difficult sport to be commissioner for.

Looking at the last three commissioners of baseball, Fay Vincent was vilified by players, some owners and most fans for allowing the 1990 lockout to occur. Also, when Vincent banned George Steinbrenner from baseball for life after hiring Howard Spira to try and get information on Dave Winfield to help Steinbrenner in a lawsuit filed by Winfield for reneging on a commitment to a charitable foundation, many owners wanted Vincent fired immediately for being disloyal to them. And after he allowed salaries to get out of control, Vincent barely survived a vote by owners who said he didn't know anything about economics. The players unions were also upset with Vincent for the suspension of players, including Steve Howe, who the union argued should have been treated with compassion rather than a lifetime ban. When he eventually resigned as commissioner Vincent said it was an impossible, thankless job. 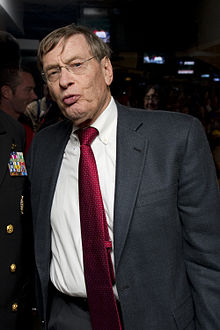 Bud Selig, the commissioner after Vincent also had some tenuous years. Selig will likely be best known as the steroid commissioner for sanctioning the Mitchell Report, which implicated 84 players for steroid use, including some of the biggest players in the game like Roger Clemens, Barry Bonds and Miguel Tejada. He also bore the brunt of the report when it showed how some teams were complicit in allowing steroids to be used and criticized Major League Baseball itself for not doing anything sooner. When Mark McGwire, Sammy Sosa, Jason Giambi and others admitted to steroid use, no concrete plans or rules were put in place to combat it and Selig had to somehow deflect the blame from the owners.

Selig was also criticized for handing out fairly light penalties to those who were named in the report. The harshest penalties for steroid users have been implicitly laid by the Hall of Fame voters who continuously pass over Barry Bonds and Roger Clemens for election despite having the clear statistics to be voted in unanimously. Selig was also criticized by many in the business for continuing Fay Vincent's ban of Pete Rose from a Hall of Fame ballot for betting on baseball, despite proof that he never bet against The Reds. Selig, however, has been praised for decisions that have helped baseball such as the Wild Card in the playoffs, inter-league play, instant replay and for making the all-star game meaningful by crediting the winning team with home field advantage in the World Series.

Current commissioner Rob Manfred, however, has been deemed as a failure and with every action he is despised more each day, especially by the players and fans. Aside from some questionable economic decisions that have angered players and fans, his biggest mistakes were with the Houston Astros cheating scandal and his handling of the 2020 baseball season.

It was proven last year by Ken Rosenthal that in 2017 the Houston Astros cheated throughout the regular season and post season by using cameras to steal signs and banging on trash cans to relay the signs to players on the field. The scandal exploded and there were questions of how Manfred would penalize Houston, including rescinding their 2017 World Series title. Instead of a harsh sentence, Manfred instead suspended Manager James Hinch and GM Jeff Luthrow for one year and laughed at the suggestion of taking away their World Series trophy, telling ESPN "it is only a piece of metal". The team decided to fire Hinch and Luthrow outright, but no real consequences were given to the organization itself other than a $5 million fine.

To make matters worse, Manfred announced that anyone intentionally caught throwing at Astros players in the 2020 season would be suspended and on July 29th, Manfred suspended Joe Kelly for eight games (the equivalent of 22 games in a full season) for throwing at Alex Bregman and Carlos Correa in a game against the Dodgers. Dodgers manager Dave Roberts was also suspended for a game, while Houston manager Dusty Baker received a small monetary fine for his actions in the ensuing melee.

On social media fans are furious at Manfred for suspending the players, thereby condoning the cheating, and the Dodgers have indicated they plan to fight the suspensions. There were also suggestions that Houston cheated in the 2019 playoff run and that the New York Yankees cheated in games against the Boston Red Sox, but Manfred and the league brushed both suggestions off. As well all players that were involved in the cheating scandal were given immunity for their cooperation into the investigation and hence received no suspension or fine for their actions.

But where Manfred has failed the most and where he should be truly reprimanded is for his handling of the 2020 baseball season.

Unlike the NHL and NBA, which were about to start their playoffs when the COVID-19 pandemic struck, forcing the cancellation of games, MLB had yet to start playing. Thus, they had time to come up with the ideal plan on how to start the season when the time arose. But Manfred instead took the time to fight with the player’s union over the number of games to be played. Realizing that they would not have fans in the stands, the owners told Manfred to negotiate a deal to play the fewest games as possible and to pay the players as little of their salaries as they can in order to lower team costs. It was said that many owners wanted Manfred to scrap the season altogether to save on pension contributions as well.

The players asked for a 114 game season at full salary and Manfred countered with an 82 game season at reduced salaries. He then lowered the offer to 76 games, but indicated the season pay would be just 80% of salaries. Each offer to the players was more insulting than the last and in the end he mandated a 60 game schedule at 100% of the prorated salaries, meaning 37% of the players full salary for the year and nothing for the playoffs. The union reluctantly agreed to it, although they indicated that it means war in the coming years when it comes time for a new bargaining agreement. And unlike the NHL, which announced all playoff games will be played in two hub cities in Canada where COVID-19 spread is very low, and the NBA, which announced all playoff games would be played at Disney World, Manfred insisted that all teams would play in their own ballparks with no real restrictions in place. He reasoned that no team would then have an advantage, despite the dangers of contracting the virus under such rules.

More than half of the Florida Marlins team has tested positive for the virus and consequently all the games involving Miami have been postponed until further notice. As well, games involving the Philadelphia Phillies, who played the Marlins in preseason, have been postponed as well after some of their personnel tested positive. And while Florida is currently suffering the most because of exponential spread in Miami, other states are seeing increased cases too, so it’s almost inevitable that other teams will start testing positive as well. Texas and Arizona are states of particular concern.

Of course, these developments raise the question as to whether the MLB season will be completed or whether it will have to be shut down. Making matters worse, Manfred seems to have shrugged off the virus after he berated Washington Nationals GM Mike Rizzo for cancelling a workout after Rizzo said he feared for his player’s safety. Instead of acknowledging the risk, Manfred instead called Rizzo insubordinate, despite the fact a GM does not work for the commissioner.

The question remains whether Manfred could have made a different choice. Some analysts have said that trying to fit 30 teams and a 60 game schedule into hub cities wasn't feasible, but there were other options. Since fans aren’t allowed at games there is no real home advantage to any teams and if the league was willing to use minor league ball parks (as the Toronto Blue Jays are doing by playing in Buffalo), it was definitely possible to use hub cities.

In the New York City metropolitan area there are 8 minor league and college ballparks along with the two parks that the Yankees and Mets play in. Los Angeles has around the same number in their metropolitan area. And if the league wanted to use a third city, Chicago has several minor league parks as well. And all three cities have a slew of hotels, mostly unused nowadays, that they could have had players self-quarantine in until game day. The virus is mostly under control in New York and Illinois and while California has seen a spike, if the players were truly in a bubble, they could have stayed safe in L.A. The problem, after all, isn't the community spread in the city as much as it is the dangers of moving around within cities and constant travel between destinations. For certain Manfred could have worked something out, but he simply did not want to or could not be bothered because he was more focused on heeding the owner’s demands for a shortened season at the lowest possible cost.

Unfortunately, it appears the NFL may be going down the same path as MLB, as they are not only determined to play a full season without hub cities, but are also suggesting the games will be played with fans. Most likely in a few months I will be writing a similar article about Roger Goodell.

So, MLB is suffering a worst-case scenario currently and the blame can be almost exclusively placed on the shoulders of Rob Manfred. The owners recently extended his contract until 2024, but if the season is cancelled, the owners should buy him out and put in a commissioner that knows how to deal with adversity. Manfred may be a smart guy, but the way he has dealt with the Houston Astros cheating scandal and COVID-19 has shown that, as a commissioner, he's out of his league.