Fairway’s Forecast and Handicapping the Masters

Fairway Jay looks at the keys to success for betting the Masters at Augusta, with insights into head-to-head match-ups, isolated proposition wagers and round-by-round betting.

Keys to Success for betting the Masters at Augusta

While so much media coverage is pointed towards the marquee players and odds to win the Masters, the best way to make money consistently betting golf is isolating head-to-head match-ups and selected proposition bets. Your main handicapping focus should be on current form and course form, which includes a players experience and results playing at Augusta National. Finding value early and shopping around for the best long-shot prices and matchups is a focus as you narrow your selections and spread your risk. Unfortunately, many of the golfer's odds to win have already been bet down. Examples include Tiger Woods, along with 2018 PGA Tour winners, Dustin Johnson, Phil Mickelson, Bubba Watson, Rory McIllroy, Justin Thomas and Jason Day. Your research and following others insight on proposition wagers may help you uncover some prop bet opportunities, and live wagering at the sports books is another option when betting on golf and the Masters.

Daily fantasy has added to the tremendous interest in golf betting, and the strategy is different when drafting players and putting together a team on a budget. We'll leave the fantasy advice to others this week, but know that fantasy golf is a great way to add to the enjoyment of the Masters and weekly golf events, and certainly an opportunity to make a big score if you have a long shot winner on your team.

Along with player head-to-head match-up betting and isolated proposition wagers, astute handicappers and bettors also wager on player finishing position and round-by-round betting, which provides another good chance to score if you know player strengths and weaknesses and factor in weather. Yet, I still caution wagering risk when weather can become a significant factor, as it only adds another unknown element which can make handicapping more difficult. See Zach Johnson's 2007 Masters win in inclement weather as a good example.

Another factor in match-up wagering is line prices and adjustments, as the lines can move quickly and sharply on head-to-head match-ups. In 2017 we bet Justin Rose (-115) over first-time Masters starter Jon Rahm, and Rose took money and nearly won the Masters while beating Rahm by 12 strokes. In 2016 we also bet Justin Rose (-125) over Louis Ooshausen, and while Rose won the match-up and finished top-10, he took lots of money and closed greater than -160 at some sports books. We also clubbed right on Daniel Berger (-130) over Webb Simpson and cashed our easiest matchup on Jamie Donaldson (T21) over Graham McDowell, who was a poor horse for the course, not in good form or mental makeup, and missed the cut badly. So you can see that while the focus and most the betting action is on the bigger names and top-ranked players and contenders, there are plenty of options to cash in on lesser-known players as the majors also provide a bigger betting menu and more match-ups offered by the sports books.

The Masters at Augusta National is a picture of perfection. Manicured fairways, lush green landscape and magical moments and memories surround the first major championship of the season. So too did windy weather in the opening rounds of the 2017 Masters, and perhaps that's why we saw strong, proven players in windy weather emerge like Garcia, Rose, Schwartzel, Casey, McIllroy and Scott. Some of those players we identified as win wagers and both match-up and prop support in our player profile and picks preview article.

This year's weather forecast at Augusta shows a cold front rolling in Wednesday, bringing some instability and likely showers, softening the course and also threatening the Par-3 Contest. The winds could gust from 20-25 MPH on Thursday or Friday, when partly cloudy skies and high 60's turning to mid-70's temperatures greets the players. But Saturday and Saturday night will likely see rain with some isolated thunderstorms. Less than four days before the tournament begins, there is a 50 percent chance of rain in the forecast, and the long-range forecast doesn't foresee that disruptive weather clearing out until around midday Sunday. The weekend weather will appear to add some challenges for the players, and something to consider when you're identifying players of interest and wagering options.

Augusta National has been a venue of abundant change going back to the first Masters in 1934 with most major changes to the course in the last 20 years. But there have been no major changes since 2006, when Augusta lengthened six holes. In 2002, nine holes were revamped. In 2014, an ice storm damaged the Eisenhower Tree, and the large pine was removed from the 17th hole. Changes are likely for the 2019 Masters, as hole no. 5, already one of the toughest on the course, is set to be lengthened with a new tee box added.

Keys to contending and winning at Augusta:

Augusta is mostly a second-shot golf course, and while longer hitters have an advantage and playing the par 5's well under par is significant to success, it's precision ball striking, quality irons and approach play and premium putting with the ability to get the ball in the hole from a distance of 10-feet or less that are keys to success. In the 2017 Masters, the top ten finishers gained the most strokes with their approach shots. So while there is a premium placed on putting, and Augusta greens are more difficult to putt than average PGA Tour courses, it's more important to have a strong iron game and approach play (especially inside 80 yards) to place shots more accurately. You don't have to be an elite putter to have a strong putting week at Augusta, as 2017 Masters Winner Sergio Garcia's Achilles heel has always been his putting. While improved, he still ranked 19th in strokes-gained-putting for the week at Augusta, tut 168th for the season. Runner-up Justin Rose ranked 10th in putting for the week, yet he ranked 123rd for the season.

Forecasting putting week-to-week is difficult, so identifying players with precise ball-striking and approach play will guide you to players that will position the ball better and in the right spots on the green to give themselves better opportunities for birdies and minimize longer par-saving putts inside 10 feet.

In addition to the keys to contending, we outline Fairway's Formula for more success.

-- Form – current state of players game
-- Fit – course form and how a players game fits with a specific course
-- Forecast – the ability to interpret information and intangibles, with an informed but speculative evaluation of variables not found in the data.

Form and fit can be measured by predictive analytics models and review of scoring, stats and ShotLink data. 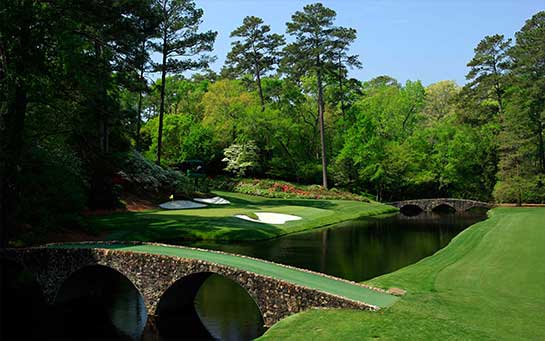 Forecasting is determining if Tiger is returning to old winning form, and also understanding the betting market and value. In Tigers Woods case, there is no value and he's ridiculously priced to win the Masters. An example of popularity and perception vs. reality. Another example is Hideki Matsuyama, who is not in good current form after experiencing pain in his left thumb and wrist in February. He missed six weeks and three usual starts during rehab, and while his course form at Augusta has been excellent his last three trips since 2015 (3 top-11 finishes), it was not good in three previous starts at Augusta. Matsuyama is cramming in practice sessions leading up the Masters, but returning from injury without competing consistently is not a formula for success at a major event. We'll be playing against Hideki at this year's Masters, eyeing plenty of match-ups to make money by fading Matsuyama.

Not only is a major championship and green jacket at stake, but so too is a big payday for the winner, as $1.8 million is the top prize of the $10 million purse. Augusta National will play to 7,435 yards and a Par 72. The Par 5's rank as the four easiest holes, and the longer Par 4's will give the bigger hitters an advantage. However, if conditions soften due to rain, the distance advantage diminishes especially if players are hitting balls from the rough. But along with length, experience is a definite advantage at Augusta, as it goes hand-in-hand with ball placement and approach shots, as premium putting with an understanding of Augusta's slippery slopes and heavily undulating surfaces is key to success.

Some of the best players in the world have had some disastrous rounds at Augusta which have cost them a green jacket and a victory in the most famous major of the year. In 2016, Jordan Spieth was in complete control of the tournament with a 5-shot lead entering the back 9 on Sunday before imploding on the par 3 12th hole (155 yards) and hitting two balls in the water to take a quadruple-bogey. Rory McIllroy shot an opening round 65 in 2011 to take the lead, and was leading by 4-shots through 54 holes before imploding with an 80 on Sunday to fall out of the top-10. And in a most memorable Masters meltdown, Greg Norman led the entire tournament including by 6 shots into Sunday's round, where he shot 78 and lost to his playing partner Nick Faldo by 5 strokes.

So even as the best players hit the hazards and suffer some struggles along the terrain and putting surfaces at Augusta, we direct you to focus on the things you can control as you analyze and handicap the event. That includes the keys mentioned as a guide to more winners in match-ups, props and win wagers.

Here's hoping your week is filled with more birdies than bogeys as you shoot for a good score at Augusta, and you're match-ups are fulfilled at the Masters. You can bet on it.