The leagues have resigned themselves to the fact that sports betting will be legalized but are any of their proposed fees justified and will they work to enhance sports betting or drive it deeper into the shadows?

Sports leagues want a piece of the action

With the Supreme Court decision regarding sports betting in New Jersey scheduled to be rendered shortly, it appears some leagues have resigned themselves to the fact that sports betting will be legalized, and they want a piece of the action. The NBA, which was the first league to endorse betting on its games, put forth the request for a 1% "integrity fee" and MLB quickly followed suit with a similar request. Both leagues said they would oppose any state legislation that does not include an integrity fee, but they also inferred they would give their blessing to any state that cuts them in on the action. While other leagues haven't weighed in on the issue, it's almost a certainty that the NHL and NFL would support a ruling in favor of New Jersey, provided states mandate a 1% fee for all wagering on their sport. The one league that may hold out is the NCAA. While they would certainly love the money, it's hard to see the NCAA ever giving their endorsement to betting on their games regardless of the conditions. In fact, the NCAA has been quite adamant they want college sports left out of any gambling legalization bills.

The term "integrity fee" is a misnomer. Integrity implies that the fee will help ensure fairness in the games, but the fee has nothing to do with bringing honor to betting, it is simply a tax given by sportsbooks to the league in exchange for dropping any future challenges to sports betting legalization.

Dan Spillane, the NBA Senior Vice President and general counsel suggested otherwise in a prepared statement earlier this year when he promoted the fee:

"Without our games and fans, there could be no sports betting. And if sports betting becomes legal in New York and other states, sports leagues will need to invest more in compliance and enforcement, including bet monitoring, investigations, and education. To compensate leagues for the risk and expense created by betting and the commercial value our product creates for betting operators, we believe it is reasonable for operators to pay each league 1% of the total amount bet on its games."

Spillane also fails to point out that most of scandals has involved illegal bookies, so any efforts put into combatting cheating at legal and licensed sportsbooks will probably be irrelevant to stopping potential corruption. Don't forget that Tim Donaghy did his betting with the mob and underground bookmakers. If someone is truly a scammer or cheater it's very unlikely he's going to bet with Caesars or William Hill. But even if one concedes that the leagues should get something, since there will be a small cost to them to do more monitoring, the 1% fee on handle seems high. One percent fee may not seem significant until one realizes that it is on every single bet placed. Several analysts equate a 1% fee on handle as equivalent to 20% of revenue or higher and even the most conservative bookmakers equate it to 10%. This would be in addition to any taxes states take from bookmakers, and, of course, any winnings would have to be reported to the IRS. So, if legal sportsbooks in the U.S. handled say $1 billion on basketball and baseball the leagues would be given $10 million as an integrity fee regardless of the profits the sportsbooks make. Add to that the standard 20% of gross profits given to the states and any taxes the federal governments choose to institute and sports betting may prove to be unprofitable. 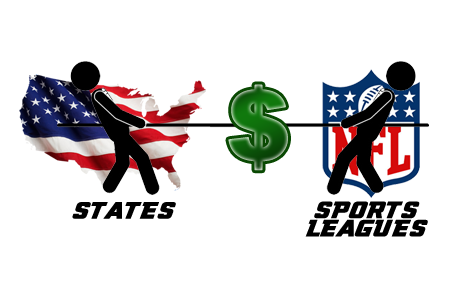 Sports betting has a far lower return to the gambling provider than casino games or horse racing, so, in the very least, these fees will require bookmakers to increase the hold on their bets or charge the fees back to the consumer, which will serve no purpose other than to drive betting where it is now – offshore or underground.

Prior to the Internet becoming a meaningful medium for betting, the UK and Austria governments required bookies to pay a 10% tax on all bets placed. Consequently sportsbooks in those locations passed that tax onto bettors. This was fine when those places were the only establishments where someone could gamble, but once the Internet became viable and jurisdictions like Antigua, The Isle of Man, Gibraltar and Malta offered gambling companies an opportunity to offer gambling tax free almost all online sportsbooks moved to those locations just to stay competitive. After all, bettors in North America weren't going to give up 10% of their wins to a place like Bowman's International if they could place the same wagers with Intertops or BetOnline and not keep all their winnings. And undoubtedly the exact same thing will happen in the U.S. if sportsbooks choose to deduct 10% of winnings from all wagers, or if they build it into the lines by instituting say a 40cent line on baseball, bettors will simply continue to bet offshore or with their local bookies because it just makes sense financially.

There have been some comments by league spokespeople that their fee is no different than the racetracks taking out a percentage of the winnings for the option of offering the races, but that is patently unfair since horse racing has numerous costs built into the operation of the races including, upkeep of the tracks, purses and the salaries for horsemen. Unlike the sports leagues, they do not get a substantial amount of money from ticket sales, TV contracts and merchandising. Other than the Triple Crown and Breeder's Cup, there is little interest in horse racing by the general public. Most race tracks in North America have stopped charging admission fees and even program sales have dropped as bettors download them off the Internet. Of course, a lot of tracks also now get revenue from casinos at the tracks but that doesn't cover all of their costs.

Spillane also noted that other countries give gambling revenue to the leagues, namely France and Australia but those countries have felt the pinch because of these fees. I spoke with a former sportsbook manager who I'll call Jerry from Australia who acknowledged the fees:

"We all pay. It's more than 1% of handle and includes, multiples and parlays. They (the leagues) collect every 3 months and can audit the figures. And all the sports do it, and raise the fees every year, no questions asked. Bookies also pay 10% GST to the government and there are ever increasing product fees. It's exciting times for those who take bets illegally as that industry grows immensely."

Jerry also noted that a point of consumption tax is in the works (similar to what the UK Gaming Commission instituted) and he believes it is inevitable that would be mandated by most U.S. states too.

"With a point of consumption tax, the minimum tax on overall handle is 2% and with that you arrive at a situation where a 104% betting market is insane (as it can't be profitable regardless of how good bookmakers are)."

Jerry also noted that having every state issue different rules (especially regarding the integrity fee) will just cloud the issue and frustrate bettors, again driving them to seek bettor opportunities to wager.

"Betting in the U.S. should be uniform and not seen as a cash grab, but that is unlikely. We cannot get 6 states and 2 territories to agree on anything in Australia, so good luck with 50 states over there."

One other concern is the leagues, in an effort to justify the integrity fee, have asked for the ability to identify and track all bettors. They indicated this would allow them to see who is betting that shouldn't be (e.g. Pete Rose on Cincinnati Reds games) and would ensure fairness. But for larger bettors this could be a huge deterrent. Regardless of whether it's for tax reasons or privacy reasons, many wise guys will not agree to sports leagues evaluating their personal betting patterns and if the leagues insist on this concession, it's almost certain many large bettors will decide to stay with their current bookies.

Currently three states have included the integrity fee as part of their sports betting bills, but the majority of states have either chosen not to include it or simply haven't considered it. But it still brings up the question as to whether the leagues deserve the integrity fee.

On one hand, they should get something to compensate them for any additional costs they will incur to monitor games, but it can be argued that the cost should only be for the increase in costs and if they are already monitoring games, they shouldn't be compensated for those efforts. On the other hand, if the leagues are truly concerned about integrity, then they should be promoting legal state-run sports betting with no strings attached because it will bring the betting to the forefront and not leave it with illegal bookmakers who are known to be the ones that are involved with game fixing and corruption. But everyone knows that integrity is not the main concern of the leagues and it's simply a revenue grab.

Of course, the leagues have other opportunities to generate money from bookmakers and states without requiring an integrity fee and they are already doing that with DraftKings and FanDuel through sponsorships. The CFL made a large amount of money by partnering with Bet365, who put their logo on uniforms and on football fields and UK soccer teams make a great deal of money by putting sportsbook advertising on the uniforms. In fact, some teams are even identified by advertising from sportsbooks like Bwin, Betway and Bet365.

In the end the leagues should realize that a 1% integrity fee is just too high and will only serve to drive gambling underground or offshore, and there is no integrity in that.