The future of gambling ships to nowhere may be in question

After a recent casino boat shuttle fire and the impending Supreme Court sports betting decision, the days of floating casinos may be numbered.

Floating casino boats may soon become a thing of the past

Last week a casino shuttle boat caught fire killing one person, and it brought into question the value and legality of offshore gambling ships. These floating casinos were once quite popular, there were over 20 boats operating in Florida alone in the mid 2000s, but that number has dwindled significantly and only 3 ships exist in Florida today. They include the Victory Casino which floats out of Port Canaveral and Jacksonville and the Tropical Breeze Casino which operates from Port Richey. It was the shuttle for the latter company that experienced the fire. Gambling ships also operate out of other states, but until recently Florida has always been viewed as the standard for gambling ships.

The first gambling ships appeared in the United States in the 1920s when large vessels were anchored just outside the 3-mile limit that constituted international waters at the time. The ships were apparently quite ritzy and aside from offering gambling, they also provided food and alcohol, which not surprisingly was quite a draw at the time of prohibition. The first ships appeared in California and Florida and despite being raided frequently, the cases against the owners were almost always dropped and the ships continued to operate until 1949 when a law was finally passed making it illegal for Americans to transport gambling machines or people from U.S. ports for the purpose of gambling. That law was known as the Gambling Ship Act although it was more commonly referred to as the Johnson Act. While states couldn't do anything about the operations while in international waters it did provide a way to disallow these boats to dock back in U.S. ports and it provided a means to arrest operators when they returned to U.S. soil. More importantly it made the casino shuttle boats illegal, thereby making it very difficult to transport people from land to the ships. The law stayed on the books until 1992 when Congress passed HR3282, known as the Gambling Cruise Competitiveness Act, which amended the Johnson Act to allow the transportation of people and gambling devices to international waters, unless states opted out. Some states like New York and California did opt out, but other states, like Florida and South Carolina, decided to allow the boats to operate. As such, these gambling ships started popping up like weeds in Florida 12 miles offshore which was the new rule dictating international waters. It should be noted that these are different than riverboat casinos which are docked on the river and are legal under city and state laws. 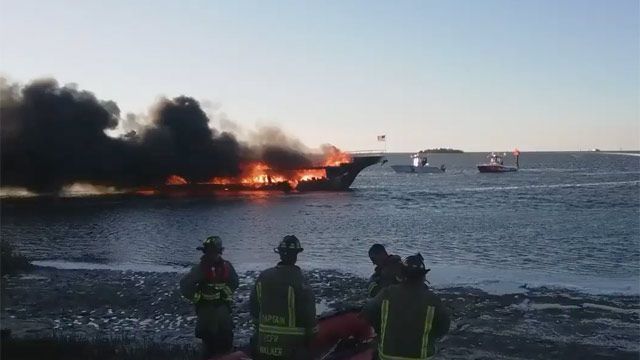 One of the first and largest operators of gambling ships was Sun Cruz, owned by multi millionaire Gus Boulis. By the late 1990s Sun Cruz had 12 ships operating from several ports in Florida, including Hollywood, Jacksonville, Key Largo, Port Richey, Palm Beach and Port Canaveral. They also had a ship that operated from Myrtle Beach. But in 2009 following a major lawsuit and scandal which involved a sale to disgraced Senator Jack Abramoff they were forced into bankruptcy and sold off much of their operations. Upon filing for chapter 7 bankruptcy they also owed the Florida Port Authority $300,000. The Port Richey operation was eventually sold and operated under several names, most recently Tropical Breeze and the Port Canaveral ship was eventually purchased by Victory. Despite the bankruptcy in Florida, Sun Cruz continued to operate in South Carolina under the name Santa Cruz Casinos, setting up headquarters in Little River, South Carolina. In the meantime, the gambling ship business as a whole seemed to be suffering. In 2009 the Big Easy Casino, owned by Palm Beach Cruise Lines filed for bankruptcy and in 2012 the Black Diamond Casino boat shut down operations not long after starting up. And most recently in 2015 the Big M Casino, which was a part of Sun Cruz and operating in Fort Myers closed its ship and moved to Little River to join its sister operation. Plus, according to accounts the gambling boats that operated in the northeast were never really successful.

Under the rules of the gambling ship, people are charged a cruising fee, usually between $8 and $15 which is given to the port authority. A shuttle boat then transports gamblers to the floating casino. The fee is reimbursed by the ship in the form of free drinks or food. It generally takes about 45 minutes to an hour for the shuttle boat to get to its destination and after a set length of time designated for gambling (usually 4 hours), the boat leaves again to bring people back. There is usually a late morning cruise and an evening cruise, but on special weekends there is often an additional tour. According to the companies it is mostly retirees who go use the earlier cruises with an average age around 60 while the evening cruises attract a much younger crowd. The music on the ships reflect the age disparity. During rough weather the cruises can be suspended.

Despite the closures of other ships, Victory Casino claims that their cruises to nowhere are popular and thriving. In fact, the Port Canaveral cruise was so popular that they added another one from Jacksonville just a few years ago. Whether that ship was purchased from Sun Cruz is unknown. And while Tropical Breeze never really indicated how they were faring, people in the know told me that Tropical Breeze isn't doing nearly as well. Why Victory is doing well and has bucked the trend is unknown, but it could be due to sports betting. While the Tropical Breeze Casino only offers table games and slot machines the Victory Casino ships have a sportsbook where gamblers can bet on games that are being played. And currently Floridians can not wager on sports anywhere else.

"Given this recent fire on the shuttle boat one must wonder if the days are numbered for the gambling ships."

According to reviews on Yelp and TripAdvisor Victory Casino is generally liked while Tropical Breeze has many issues. The biggest complaints about Tropical Breeze are that it can get cold at sea depending on the time of year, that the machines are often quite old, that the boat can get quite smoky and the air quality is not that good (unlike land based casinos which usually have better ventilation and a non-smoking area), and most importantly that the gambler is stuck if doing poorly. If a gambler is not winning and wants to leave at a land based casino they can do so but on these ships, there's no option but to wait until the shuttle boat comes back after the allotted time. And several reviewers complained that the ATM machines on Tropical Breeze rarely work which means they can't get more money to gamble if they lose what they have. And unlike real cruises these ships aren't equipped with pools, restaurants, movie theatres or other activities to keep one occupied should the person decide they no longer wish to gamble.

But given this recent fire on the shuttle boat one must wonder if the days are numbered for the gambling ships, particularly Tropical Breeze. For those who wish to play slots or table games there are numerous Seminole casinos throughout Florida and of course the tracks in Dade County have machines available as well, per the compact with the Seminole Tribe. Plus, there is apparently a plan in Miami to put up a large non-Indian casino if the state can get the courts to agree to it. Yet the lure of sports gambling is still key.

I spoke to one Florida resident who says he goes to the Victory once or twice a month to bet on sports although he did contend that the ships offer other benefits that land based casinos don't. He said the machines at the Seminole casinos are very low paying (whether that's true or not can't be confirmed); that staff are often quite rude; that promotions are really non-existent and that the table limits are very high. He told me that $5 tables on the ships are common, but can rarely be found at Florida's land-based casinos. And he said that the larger casinos, including the Coconut Creek casino in Fort Lauderdale or the Hard Rock in Hollywood are incredibly crowded. He claims on weekends the minimal bets at blackjack tables are $25 or more and even then, there are lines to play the tables. Most importantly he claims he likes to bet on sports which he can do on the Victory Casino boat, but can't do in the Indian casinos. And from reading comments and reviews on Twitter and TripAdvisor that seems to be a major reason people board the Victory Casino.

That niche, however, could be lost to Victory Casino if the Supreme Court rules for New Jersey in the sports betting case and other states choose to legalize sports betting. Florida was among the 20 states to file a brief in support of New Jersey in its Supreme Court case and by all accounts they plan to be one of the first states that will pass sports betting laws if PASPA is overturned. Rep. Jason Brodeur and Sen. Dana Young have both filed fantasy sports bills to be considered this year and the state has been attempting to introduce the law since 2015. The bill has failed to pass but it appears it will now be legalized as part of the larger omnibus gambling bill to change how gambling is done in parts of the state. And to most in the government they seem to equate all forms of sports betting as the same. So if DFS is legalized it's likely sports betting will be treated the same way if it is not deemed illegal. The main question in that regard will be whether it will be offered in the Seminole casinos or at the pari-mutuel tracks or both. As well online sports betting will have to be discussed too. That determination on where sports betting is offered could be contentious since the Florida government and the Seminoles have been at odds over who should control gambling in the state. But either way if a resident can wager on sports at a local casino or racetrack, the idea of going to a boat simply to wager on sports will make little sense.

So, with that in mind one must question if the days of these ships are numbered. No doubt the fire on the shuttle boat has some wondering whether it is wise to put their faith in trusting in the safety of these things and it also likely the fire will lead to some legislators to look more closely at the legitimacy of these operations. But most of all, the one niche of gambling boats, sports betting, could be lost if SCOTUS rules that PASPA is unconstitutional and sports betting takes place in land based operations or online in the state. If that indeed happens it is hard to see many residents that will still want to venture on these cruises to nowhere. It is almost certain that if sports betting is legalized in Florida the number of cruises will drop or the ships will be repurposed. At the same time real cruises will continue to flourish and companies like Carnival Cruise Lines or Norwegian Cruise Lines will be only too happy to take American's casino action as they sail in the Caribbean Sea.