The U.S. may be preparing to join the world with legal sports betting

Recent actions by the American Gaming Association show that the organization is actively trying to change sports betting laws in the U.S. It's about time.

Sports betting is the topic du jour worldwide as various countries are looking for ways to either legalize and regulate the product where it currently isn't legal or amending their laws to provide more betting opportunities.

In Canada, a new bill, C-221 "the safe and regulated sports betting act", has been introduced to legalize single game sports betting. This bill is similar to bill C-290 which was first introduced in 2011 and passed with all party support in the House, but was subsequently defeated in the Senate, the first time a bill was not approved by the Senate when the House voted unanimously in favor of it. The reason for its defeat is believed to be a sort of coup by the Senate members who were trying to somehow punish the ruling Conservative government. But now MP Brian Masse plans to re-introduce it under its new name and the feeling is that if it passes with all party support in the House again, the Senate will simply rubber stamp it, as should have been done in the first place. It's uncertain how the Senate will justify supporting it this time, but no doubt the Senators will offer some form of ridiculous argument why this bill is different from the last. The difference of course is that the Liberals, who the majority of Senators like, are now in power and the scrutiny of past Senate corruption has dissipated. Most likely the Senate will simply say that the provinces have told them that they are relying on single game sports betting to take back some of the money being spent offshore at sites like Bet365 and William Hill, so it now makes sense to approve it. To amend the current law that prohibits single game sports betting, would simply require the removal of one word in the statute. 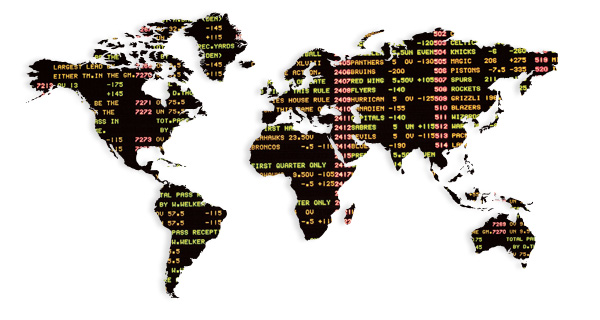 In Russia, online sports betting was just legalized last year and Russia is planning to introduce a 10% betting tax, which bookies are arguing will bankrupt them. It's uncertain whether the new tax will be approved, but the fact that Russia is even talking about how to raise revenue through sports betting is remarkable. For the longest time sports betting was a taboo topic in that country but the government realizes that Russians are going to wager anyway, so they may as well legalize the product to help stave off illegal offshore betting and in the process raise money for the government.

In Germany, the country appears to have reached a new agreement that will resolve the EU complaint against it. Germany planned to offer only 20 sports betting licenses, with the majority going to local companies, but the EU stated doing so violated EU law. As a result, the German Sports Minister has agreed to double the amount of online sports betting licenses and that will pretty much allow all bookmakers from other countries that want a sports betting license to get one. It still may violate EU rules but without any companies to file a complaint (as they will all receive licenses), the new agreement will likely pass without prejudice.

In Australia, the government is reviewing its policy that prohibits in-play sports betting and it appears they will scrap that part of the law. Moreover, there is a hint that the country is looking to offer more offshore bookmakers the chance to cater to Australians legally without having to team up with a local bookmaker. Sports betting has always been legal in Australia but very restricted to only crown approved companies, so the fact they are even considering opening it up to offshore competition is significant. Again, the motive behind this new initiative is to allow local companies to compete against the likes of Paddy Power-Betfair who have found a way to offer in-play betting that isn't deemed illegal and also to help bolster government coffers.

And several other countries are also reviewing their laws and looking at ways to help bolster state coffers in this area. The reason all these countries are looking at ways to increase revenues to the government via sports betting seems obvious. Citizens are gambling on sports anyways and arresting them for betting isn't feasible. In fact, a recent conference in Doha suggested that globally over $3 trillion is wagered on sports with about 2/3 of that amount being wagered on soccer. Those figures are just too hard for cash strapped governments to overlook.

The one obvious hold out in all of this is The United States.

Aside from Nevada and parlay betting on NFL football in Delaware, sports betting is illegal. Oregon and Montana also have the right to offer the product since they had some form of sports betting prior to the passing of PASPA in 1992, but neither state has given an indication they are interested in offering betting on sports at the present time. More than likely they will reconsider if sports betting is legalized federally, either through a new law or the scrapping of PASPA. And that indeed appears to be a distinct possibility.

Geoff Freeman, the President of the American Gaming Association stated in a recent press release: "Sports betting has never been more popular in America than it is today. The illegal sports betting market is running rampant. AGA is leading the conversation around a new approach to sports betting that enhances consumer protections, strengthens the integrity of games and recognizes fans' desire for greater engagement with sports."

The AGA, although independent, takes its marching orders from its members which include all the major casinos like MGM, Caesars, The Sands and Wynn. And MGM CEO Jim Murren stated in November that the U.S. needs to take a "fresh look" at sports betting in order to stave off the illegal competition.

There's no question that other states are very interested in offering sports betting, although the most vocal of the lot has been New Jersey. In that state residents voted by a 3 to 2 margin to legalize sports betting and Governor Chris Christie has campaigned for its legalization. The New Jersey court shot down the appeal by the state to offer sports betting, telling the state that it lost its opportunity to legalize sports betting in 1992 when it opted out of PASPA, but state legislators are still trying to get the ruling overturned in a higher court, arguing that times and circumstances change. And make no mistake, the AGA has a very strong presence and lobby group in the Garden State. As well if the appeal reaches the highest court in the land Antonin Scalia's death will mean the case will almost certainly be heard by a more gambling friendly Democratically controlled SCOTUS. Along with New Jersey, Indiana, Iowa and Florida recently indicated an interest in legal sports betting and sources have told me that if it is ever legalized all but 12 states want in.

From Freeman's statement it appears that the AGA will argue, similar to the other countries, that legalization is necessary to stave off the illegal betting currently occurring locally and offshore (the U.S. has no real way to curtail the practice to its citizens that want to gamble), and that it provides an opportunity for states to raise revenue without taxes. As well the AGA seems to have teamed up with Sports Betting Monitor, a company that provides a way to analyze sports bets and determine suspicious betting. So undoubtedly the AGA will argue that unlike in the past, new technology can actually help detect game fixing and improve the integrity of the sports. Geoff Freeman, will present the AGA's campaign that seeks a new approach to legalized and licensed sports betting across the United States at the iGaming Executive Conference in Amsterdam on the 8th of June. And there's no question that Freeman wouldn't be speaking unless the AGA senses that the United States is moving towards legal sports betting.

So why the big change of heart?

More than likely it starts with the sports leagues themselves which have softened their opposition to sports betting. NBA Commissioner Adam Silver's suggestion that sports betting should be legalized is significant, but the fact that only the NCAA and the NFL have publicly opposed Silver for his stance is more telling. There are suggestions that other league officials have told Silver privately that they can't openly support him, but they won't oppose him if he can make it happen without directly involving them. If the NFL refuses to budge, then league owners (some who have indicated they have no real opposition to sports betting) could tell Goodell to conform or he may be shown the door and be replaced with someone, like Adam Silver, who sees far more benefit from sports betting than harm. The NCAA will more than likely still oppose any form of legal sports betting on their leagues because game fixing is a more real threat at the university level that at the pros, but they will probably be appeased with a section of the law which states that betting cannot take place in states where games are being played (eg. New Jersey residents wouldn't be able to bet on games involving Princeton, Rutgers or Seton Hall and Nevada residents wouldn't bet on games involving UNLV), and no doubt they'll be given a piece of the action that can be used to support university athletics.

As well, the proliferance of Daily Fantasy Sports and its huge success has to play into the equation as well. It's already accepted by everyone, except maybe the DFS sites themselves, that daily fantasy sports is just another form of sports betting, but the popularity and high demand for the product by residents and the benefits it is giving to the leagues can't be ignored. It's for that reason most states are considering ways to legalize and regulate DFS rather than outright banning it as New York and Illinois are currently attempting to do.

And lastly the new Canadian sports law has to be considered. If casinos in Windsor, Niagara Falls, Vancouver and others along border states are luring American customers with the opportunity to bet legally with just a short drive, then how can they block those neighboring states from having a chance to compete? After all that's the exact reason laws were changed and casinos were erected in cities like Niagara Falls, New York, Detroit and Sault Ste. Marie, Michigan – to compete with flourishing Canadian casinos.

The bottom line is the time is now right. Sports betting is on everyone's mind and the league opposition is at an all time low. The AGA just has to figure out a way to convince the religious right politicians and judges, the evangelical groups and the holdout leagues that this is not only the future but also the right way to go. More than likely at the Amsterdam conference, representatives from other countries will provide them with some ammunition that they successfully used to promote it in their countries. Let's hope so because it is about time that the U.S. gets in the game.