Former NBA Commissioner David Stern spoke at the recent G2E convention in Las Vegas and stopped in with our own FairwayJay.

Prior to attending the Global Gaming Expo (G2E) in Las Vegas last month, I outlined an article that highlighted the buzz around the future of sports betting in America and the continued discussion and push toward legalization.

I attended all four days of G2E, meeting people in the gaming industry and attending sessions focusing on the future of legalized sports betting.

One of the most-anticipated speakers of the week took the stage on the final day of the G2E Thursday, Sept. 29. David Stern, the former long-time commissioner of the National Basketball Association (NBA), discussed the future of sports betting in America with the president of the American Gaming Association, Geoff Freeman. The audience was able to hear Stern speak out in favor of the legalization of sports betting after he was opposed to gambling throughout his tenure as NBA commissioner.

Stern started practicing law in 1966 and moved on the NBA where he worked for over a decade before becoming Commissioner in 1984, a position he held for 30 years. He was relentless of perfection and protecting the NBA brand while feeling his responsibility as Commissioner was to protect and strengthen the integrity and growth of the sport and brand. Stern said he was most proud of the fact that players started in the basement of reputation, and now the players are on a pinnacle and looked up to.

Stern has seen the changes in sports and gambling, but during his tenure he maintained his stance to not allowing betting on basketball. He didn't like kids and fans leaving a home game when the home team won but did not cover the point spread. He's also dealt with gambling scandals, as 2007 created a black eye for the NBA when disgraced referee Tim Donaghy was found supplying information to gamblers, while also betting on games he officiated. 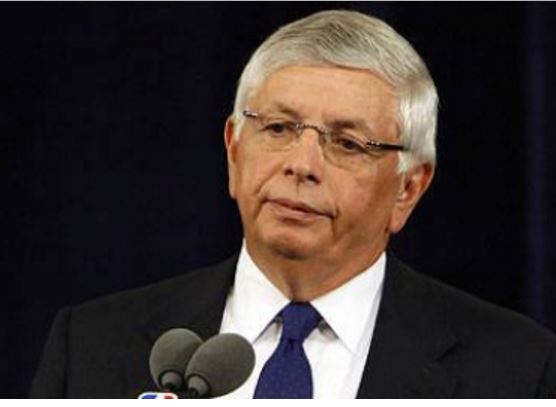 However, like many changes in sports and the gambling industry, Stern has taken a softer stance and seen his own feelings and opinions evolve to where he now hopes to see sports betting expand in the United States.

"Let's not talk about the 'evils' of gambling when it comes to sports," Stern said. "The industry has come to accept that a properly run gaming association will be protective of sports."

Stern's involvement in gaming and Las Vegas dated to his time as general counsel, when he negotiated with Vic Solerno, then of the Nevada Gaming Commission (he currently operates USFantasy), for the Utah Jazz to play 10 games in Las Vegas. Stern testified in favor of the Professional and Amateur Sports Protection Act (PASPA) in 1992, practically securing legal gambling and sports betting only in Nevada.

Reports show that less than 5 percent of sports gambling in the U.S. is done legally. Stern noted that while an enormous amount is wagered and not regulated or taxed, profits go to perhaps 'unsavory causes'.

The American Gaming Association estimates that between $100 billion to $300 billion is spent annually on illegal sports wagering, and that $90 billion will be bet on football this season. Compare that to Nevada, where only $1.69 billion was bet on football in 2015 at Nevada's regulated sports books.

In talking with other sports gambling advocates and seeing the explosion in popularity of Daily Fantasy Sports (DFS), Stern sees the potential for growth and revenue with an increase in fan engagement.

"I believe there's going to be a lot more competition for the sports viewers," he said. "(Betting) will be a driver of people to watch those games in which they have a financial interest, and as a result, they'll be more likely to watch."

DFS has helped alleviate some of his concerns about fans having a stake in player performance or game outcomes.

"Whatever barrier perhaps existed is gone," Stern said, "So, to me, if they're going to be doing daily fantasy, you might as well legalize gambling."

I talked with David Stern following his nearly one hour discussion on legalizing sports betting and the future of gaming. I asked him questions about the NBA schedule, and the extended playoffs, which provides more opportunities for gamblers and additional revenue to the league.

Would the regular season schedule ever be reduced to less than 82 games?

I noted that during his tenure, the league had a best-of-5 series in place in the early rounds, similar to the current Major League Baseball playoffs. I asked him about the wear and tear on the players with a more games and extended playoff series. Would the league consider reducing the number of playoff games or add a bye format?

Part of his answer was what I expected with revenue the driving force.

"No. There is too much money involved."

Stern now supports amending PASPA, the federal prohibition on state-sponsored sports betting. He said that the sports leagues and the individual states in the U.S. should have the option to either opt in or opt out on whether they want sports betting in their sport or state, with Congress creating a federal regulatory framework.

"We're not going to have our game, or any game, pecked away by individual state bureaus of political patronage," Stern said.

Stern's stance is that all those involved in the process of legalizing sports betting - casinos, gaming financial experts and tech companies, law enforcement, gaming control boards and sports leagues – need to come together and develop a model that regulates the process and compensates those leagues and states that participate.

Stern recognizes that billions of dollars are at stake for the sports leagues and the NBA from both the Daily Fantasy Sports growth and regulation, and legal sports betting. The opportunity to secure sponsorship deals is an enormous revenue opportunity with the potential of legalization.

And while the momentum is building and Stern and many gambling advocates hope the process of getting sports legalized in the United States happens in the next 2-3 years, it's most likely closer to 5-10 years. That's the reality of working with the U.S. government.