BetOnline pulls out all the stops for March Madness

BetOnline gets players fired up with props, bonuses and a 100K bracket contest.

March Madness has arrived and BetOnline is loaded with contests, props and promos, that will excite and reward players worldwide.

For starters they created a free printable bracket that is clean and easy to read. Players can keep track of all the NCAA results up until the National Championship, which takes place April 5th. The bracket highlights the massive 100K Bracket Madness contest underway right now at betonline.ag.

For an entry fee of just $15, players can get involved with the 100K Bracket Madness contest. The top 300 scores will win a piece of the $100,000 prize pool, with 15K going to the winner. The Contest begins with the First Round of the 2021 Men's NCAA Basketball Tournament on Friday, March 19th, 2021, so get started today!

Looking for more contests? Pick a #2 seed that loses in the first round? Bust out of the Bracket Madness early? Don't fret, because BetOnline is offering a $50,000 Sweet 16 Bracket Contest starting next weekend.

BetOnline players can insure their bets against the madness!

That's right, get free insurance on March Madness bets, only at BetOnline.ag. If an "under" bet was winning at the end of regulation, but loses in overtime, BetOnline will refund the wager for the full amount, up to $100. Opt-in for this special March Madness promotion at betonline.ag and don’t sweat your bet if your game goes to OT. 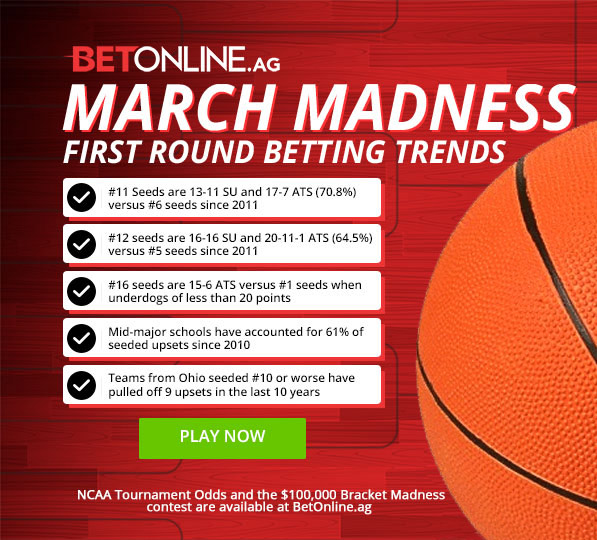 Want more betting insurance? How about a Bracket Buster refund. Get a refund on your spread bet if a Top 3 seed goes down on the first weekend. To qualify, players simply wager on a Top 3 seed to cover the spread in Round 1 and/or Round 2 of the 2021 NCAA Tournament. If that team loses outright, the wager will be refunded up to $100. The Bracket Buster is only good for game this weekend, so get started before the tourney does.

As always, BetOnline is an industry leader when it comes to offering prop bets and this March Madness, they  have fired up a vast selection of nearly 100 props to keep the action going all tourney long! the props are broken down into 9 categories, including President Biden Picks, where players can wager on whether Biden pick a #1, #2 or other seed to win it all. Luckily, the University of Delaware (UD) did not make the Big Dance!

Other categories include Mascots, Seedings, Eliminations and Buzzer Beaters. And, of course, there are tournament and game props for all of the stars in the NCAA Tournament. For example, "What will be  the largest margin of victory in NCAA Tournament?" and "What will be the highest single-game point total for any team?", which is set at a whopping 100.5!

Finally, the return of Bitcoin Boost, couldn't have come at a better time. Players who use the cryptocurrecy to deposit at betonline.ag are able to get a 5% Bitcoin Boost added to every deposit.

Fund a BetOnline account via BTC and get an extra 5% above market rate on your deposits for EVERY qualifying deposit. To claim your extra 5%, simply opt-in when powering up an account via Bitcoin deposit. This promotion is only available for the first weekend of the NCAA Tournament, so get involved today at BetOnline.ag.

From contests, to specials and bonuses, BetOnline has it all for the return of March Madness in 2021.