2016 World Series of Poker running well at the halfway point

The World Series of Poker (WSOP) is the largest, richest and most prestigious gaming event in the world. And 2016 is proving to be another sensational year at the WSOP in Las Vegas.

Inside the Numbers of the first 35 Events 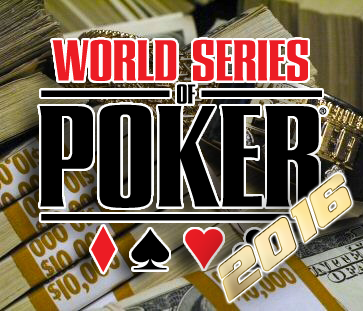 The World Series of Poker (WSOP) is the largest, richest and most prestigious gaming event in the world. And 2016 is proving to be another sensational year at the WSOP in Las Vegas.

The daily action continues at the Rio All-Suite Hotel & Casino just West of the famed Las Vegas strip. Following what was a record-breaking year in 2015, this year's 47th Annual WSOP is on pace to potentially surpass last year as the largest in terms of participation in the series' storied history.

A total of 69 events will complete this year's WSOP with the $10,000 entry Main Event scheduled as the final event beginning July 9. The final table participants, referred to as the November Nine, return to Las Vegas and compete for the championship bracelet with all becoming millionaires. The final table crown's this year's WSOP Main Event Champion November 1 with the winner expected to earn over $7 million.

A list of this year's current WSOP event winners, final table payouts and story's from each event can be found here.

Through 35 gold bracelet events, a total of 59,507 entries have been registered and recorded, which is just behind last year's record pace of 59,771. The schedule of events differs from year-to-year, but the numbers provided are accurate for recording of current 2016 events. The average entries per official WSOP gold bracelet event is 1,700.

Players from 98 countries have already participated in events this WSOP. Event #23 - $2,000 No Limit Hold'em – provided the most International Final Table. Spain, Bulgaria, Ireland, Ukraine, the United Kingdom, Brazil and the United States all fielded at least one member of the final table (the U. S. had three).

"It's great to see poker alive and well in Las Vegas this summer," said WSOP Executive Director Ty Stewart. "Paying out 50% more places this summer and continuing to sprinkle in some new and unique events while bringing back the stalwarts has proven to be a successful recipe at the WSOP. Everyone seems to be having fun this summer and with several new and exciting events in the back half of our schedule, we remain confident that players will find some great poker playing options the rest of the way."

A record 8,694 participants have received prize money this year (through 35 events), a result of the payout structure change awarding prize money to the final 15% of entrants in most events, instead of what was 10% in the past. Last year a record 11,638 cashed in WSOP gold bracelet events during the 68-event schedule, a number sure to be smashed this year.
Between official WSOP gold bracelet, Daily Deepstack, single and mega satellites, a total of 124,844 entries have been recorded at the 2016 WSOP, ahead of last year's 116,977 entries at this point (Up 6.7%)

To date in WSOP gold bracelet events, 75 different countries have cashed with the U.S., Canada, United Kingdom, Russia and Germany in the Top 5.

The 2016 WSOP has just over three weeks remaining. Some events of note in July include:

In addition to the fantastic tournament action, live action game activity has been plentiful as well, with as many as 81 tables running simultaneously at the WSOP. There are often over 250 live action tables running at the various poker rooms in Las Vegas. In addition to the WSOP events at the Rio, many additional large payout and big field tournaments attracting hundreds and thousands of players run daily at the Venetian, Wynn, Planet Hollywood, Aria, Golden Nugget and even Binion's downtown; the site of the original WSOP.

Featuring a comprehensive slate of tournaments in every major poker variation, the WSOP is poker's longest running tournament in the world, dating back to 1970 at Binion's Horseshoe in downtown Las Vegas. The WSOP has been sponsored by Caesars Entertainment and held at the Rio All-Suite Hotel and Casino since 2005.

For more information on the World Series of Poker, please visit www.WSOP.com.