Amaya Gaming is hoping that the venture into daily fantasy sports will give the company a new way into the U.S. marketplace

When Amaya Gaming bought PokerStars for almost $5 billion last year there were many people wondering if the decision was a mistake. A year later the answer is obvious. Amaya's revenues for Q4 in 2014 were $369 million (Canadian dollars) compared to $37 million in 2013 and adjusted net earnings were $86 million in the 4th quarter of 2014 compared to $5 million the prior year. This was accomplished in spite of the fact that other poker 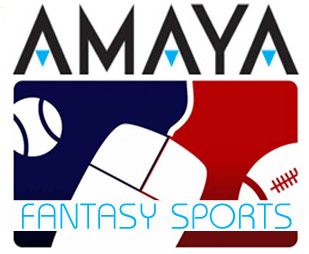 providers continue to struggle and online poker stateside has been a bust. David Baazov, CEO of Amaya is looking like a genius and it appears he has more in mind for the company. Baazov indicated that PokerStars took its first sports bet on March 31 and plans a full rollout of sports betting within 3 months. And at the start of the NFL season he expects Amaya to be involved in daily fantasy sports, a market which is expected to reach $11 billion by 2018 in North America according to Eilers Research L.L.C.

"We have taken the strategic decision to enter the daily fantasy sports category and are pursuing parallel tracks of internal development and strategic acquisitions. We expect to provide more details in the second half of 2015 but see a clear crossover from poker and daily fantasy sports," Baazov stated in the earnings call.

But it appears the strategic acquisitions will not include FanDuel or DraftKings, both billion dollar businesses that have partnerships with sites like ESPN because according to Baazov they are too small!!

"It's a clear, strong crossover with poker. And given the size of our database, you couldn't actually acquire somebody and leverage their entire platform because nobody's software that we've seen can support our volume that we would have if we launched fantasy sports," Baazov stated in the call.

The question that has to be asked of course is how poker and fantasy sports are similar. Poker gurus point to the fact that both rely on liquidity for success; both require some amount of skill and understanding how to manage one's bankroll to succeed; both have tournaments in various sizes running from head to head tournaments to tournaments in the thousands (like the World Series of Poker) with prizes allotted accordingly; both have a similar take back by the house in the 10% to 30% range depending on the size of the buy-in; both require knowing when the hand or in the case of fantasy sports salary assigned offers value; with both you are playing against other players and the list goes on.

It's understood that Amaya is hoping that the venture into daily fantasy sports will give the company a new way into the U.S. marketplace since Amaya keeps all their products under the same PokerStars name and it's almost certain that Amaya will try to launch its daily fantasy sports product in Europe concentrating on sports like soccer and rugby. But, there may be a more strategic reason for the decision and that is to force the United States' regulators hands with regards to poker. Regulators are already looking at daily fantasy sports and wondering whether it should be legal and many politicians want to criminalize daily fantasy sports since they deem it's no different than any other type of illegal gambling but there's a good chance that is precisely what Amaya wants – for politicians to decide once and for all and also decide what is truly skill. As noted in a previous article fantasy sports is legal in almost every state in the U.S. because of a carve out in the UIGEA but chances are that legislators likely envisioned season long rotisserie leagues and contests when they deemed that it should not fall under the same rules as online casinos or poker. But daily fantasy sports is indeed just another form of gambling albeit one that involves skill. The fact that the contests are for one day only (or up to a few days in the case of golf) ensures that there is at least as much luck involved in picks as there is skill which is true of poker too. But having talked to legislators recently it seems there is no real appetite to try and criminalize fantasy sports in the United States and there is definitely no interest in making the UIGEA more restrictive.

That being the case there's a good chance Amaya will try and use the expected success of its daily fantasy sports product in 2016 to convince Congress that poker, being an almost identical product should have a carve out in the UIGEA as well through an amendment. Baazov and company lawyers will likely point to the two skill sets involved in both and conclude that the differences are so remote that it's inconceivable that one could be legal as a game of skill, while the other is deemed not legal because of luck. Moreover Amaya is clearly aware that there is a new attitude towards online gambling in the United States with several polls indicating Americans want online gambling legalized. Amaya may try and initiate a campaign by American poker players hoping that the new government that is elected in 2016 will be more friendly towards online gambling. In fact, even the sports leagues have set up sponsorships with the fantasy sports sites and some leagues are looking at some form of regulation for their players as a result, since many of them admit to playing fantasy sports. And if indeed poker, casinos, fantasy sports and possibly even sports betting are ever legalized stateside Amaya would be in the perfect position to get a head start on the others and dominate all spaces in the U.S. online gambling market.

Amaya's purchases have all been successful to date and David Baazov is proving to be a brilliant businessman. If anyone can convince Congress to change its views on online poker since it has a resemblance to daily fantasy sports it is Amaya and consequently the recent move to venture into daily fantasy sports could be a very skillful decision.