The Betting Scene: How Long is Too Long to Get a Payout

The second installment of our new weekly series providing updates for the world of online sports betting. Inside this report, we discuss the time frame for payouts from online operators.

Each week during the football and basketball seasons we will be posting this new column on offshore sportsbooks and the sports betting scene. We'll look at hot topics, give some betting advice and notify players of the latest happenings online at sports betting shops worldwide.

This week we handled a couple of issues at reputable online sportsbooks (and some not so honorable), where players were frustrated with the time it was taking to get a payout. So we'll take this week to look at common methods and typical time frames for an international payout. We'll also include when to ask OSGA for help.

Back 15 years ago, sending and receiving money from an online or offshore sportsbook was simple and easy. Players could send a couple of dimes via Western Union or MoneyGram, use online payment services like NeTeller and PayPal and get paid literally the same day. But in 2006, the U.S. government passed The Unlawful Internet Gaming Enforcement Act (UIGEA), which basically made companies that move money around the globe and banks responsible for policing the gambling industry. As a a result, sending and receiving money to a gambling house outside of the U.S. changed and got much more difficult. PayPal went away completely when they were bought by EBay, the Feds went after NeTeller and Western Union and MoneyGram became very tight and tough to use. 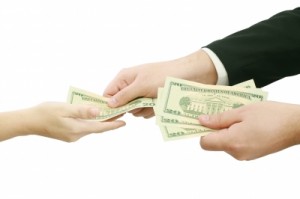 The industry limped along for several years as Western Union transfers all but disappeared and MoneyGram lmits were lowered. Today a sportsbook that still uses MoneyGram has strict limits and frequency policies in place and payouts are most greatly affected. Almost every place allows a maximum withdrawal of $300 via MG. We had one player this week complain about his sports book and that he was waiting for $450 person-to-person payout. We were glad to hear the $450 figure, but it did take this player three days to get the payout. Generally these types of payouts happen next day and YouWager.lv is still able to get many out the same day.

Check payouts also became much tighter after the UIGEA. Where checks used to arrive within a few days and were written on U.S. banks, now they take much longer and are all written on international banks. Small banks and credit unions have refused these checks and occasionally payments via check even bounce by the time the players got the check, deposited it and it clears the bank. Today, payouts via check are much harder to find at sportsbooks that cater to U.S. players and they almost always have a $3,000 limit. And, they take much longer. It is not unusual for a check to take more than a week to arrive.

But, online sportsbooks in Central America and the Caribbean are always one step ahead and in 2015, several started switching players over to Bitcoin, with a huge push since 2017 for players to use this method. Here in 2019, Bitcoin has become invaluable to both sportsbooks and players.

Bitcoin, or BTC, is a 'virtual currency' that is bought and sold like a stock or precious metal. Every day the value of BTC changes and, despite some of the wild price swings, the virtual currency has worked out very well for players. Players can send money and it is almost instantly verified and quickly received. Players can get payouts quickly and most sportsbooks get them done within 48 hours. But, often the price of Bitcoin can swing dramatically, leaving players a little short.

We have had players over the last several years who requested say $3000 via Bitcoin. A day later they get their payout and its only $2850. They wonder, "Why did my sportsbook short the payout by $150?" What really happened, is the sportsbook requested the BTC payout and between when they put in the request and when it was actually sent, the price of BTC dropped. Oddly, we never hear from a player who asked for 3K and got $3150. It seems that, like most things, eventually the exchange rate for BTC evens out and a few dollars lost via the price fluctuation will even out with a few bucks made here and there.

Our one piece of advice to avoid the fluctuations is to convert cash to BTC and back again as soon as possible. Letting a BTC payout remain in a Bitcoin wallet may cost you more than the vig of your bets.

The advent of Bitcoin alleviated many of the slow payout requests we received several years back. Most of those were strictly due to volume. Even the Bookmakers and Heritage Sports of the world sometimes had slow pay issues. But now, the big dogs can payout via Bitcoin within hours. Though again, volume may dictate delays, payouts via BTC almost always arrive within 48 hours.

MoneyGram payouts, in reduced amounts from the 90s and 2000s, generally still arrive pretty quickly. Usually up to $450 can be collected within a couple of days and always arrive within 4 business days. Checks are taking a bit longer these days. It is not unusual for a check to take up to 15 business days to arrive, but most arrive within a week.

A couple of other methods still do exist. A few smaller sportsbooks do still use PayPal (and other money transfer companies) and money orders are another alternate payout method at some places. But these are infrequent and can often come with their own sets of problems and delays.

How Long is Too Long?

Contact us here at OSGA if delays seem out of line with some of the notes above. But if you are waiting over a month for ANY payout, hit our complaint form immediately. A place like TopBet has been slow paying customers for years, with some players waiting months. And last week we reported CRSportsBet paying a player, but another has been waiting for 10 months! Clearly those time frames are out of line, but players who play at consistently slow paying sportsbooks or brand new places or books that have PayPal as their top payout option, shouldn't expect miracles and may end up waiting and hoping for quite some time.