Regulated gambling is the best thing to stop match fixing

With the recent BBC report of widespread match fixing in tennis, its time to legalize and regulate betting worldwide.

Last week a story by the BBC/Buzzfeed indicated that there was an issue with match fixing in tennis and even top players like Novak Djokovic and Serena Williams admitted they were approached to throw matches although both denied ever doing so. Tennis has always been suspected of being susceptible to corruption since it's so easy for a player to lose a match without anything out of the ordinary being detected and because some top players lost so many "sure thing" matches in minor tournaments. This of course is an issue with all non-team sports. The suspicion was raised most in 2007 when Nikolay Davydenko lost a match to Martin Vassallo Arguello who was ranked 60 positions below Davydenko at a minor match in Poland after retiring while leading 2-1 in the 3rd set with an apparent injury. What made the match suspicious was that bettors wagered like crazy on the match at Betfair, putting through almost $7 million in bets and the vast majority of it was on the big underdog even after Arguello had lost the first set. The betting made no sense (a match such as that would generally attract about $10,000 in bets at the most and almost all on the big favorite) and consequently Betfair voided all bets on the match after suspecting match fixing despite both players being cleared by the tennis federation of any wrongdoing. Even though match fixing is believed to have occurred for a long time, the BBC story highlighted incidents from about 2003 to 2008.

But it's not just tennis that has been under suspicion of match fixing. 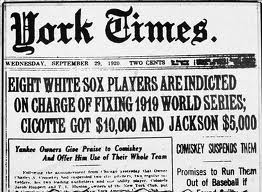 The most famous corruption scandal in sports occurred in 1920 when the Chicago White Sox were accused of throwing games in the playoffs in exchange for kickbacks from the mob and although no one was ever charged several players, including Shoeless Joe Jackson, were banned from playing in baseball again. And in college basketball games teams were suspended several times in the 1950s and 1960s for suspected point shaving or outright match fixing again in an effort to appease organized crime. Experts I spoke to who have followed and written books on match fixing suggested that the number of fixed events from the early 1900s to 1960 probably were astronomical, especially on soccer, tennis and cricket but only a few were ever exposed because there was really no way to prove match fixing, nor was there a desire by the police and regulators to throw money into investigating possible criminal activity that would likely have never resulted in a conviction.

So what happened in 1960 that changed that? It was the passing of the Betting Act in the UK. Brits always bet underground with illegal bookmakers like the rest of the world, but in 1960 the UK government decided to legalize sports wagering to combat organized crime and raise taxes for the government: "That act was the downfall of organized crime overseas since bookmakers simply didn't pay out winning bets on events they deemed suspicious and could justify to the regulators. Furthermore, a lot of athletes who would have considered throwing matches for a payoff became more reluctant to do so because they knew if they were caught it would spell the end of their careers or even result in jail time," one analyst said to me. Match fixing still took place because organized crime were able to convince players the risk was worth the reward, but for the most part players resisted getting involved unless they were at the end of their careers and didn't fear the consequences.

The start of the Internet made the ability to spot match fixing even easier for the bookmakers. Aside from looking at overall betting patterns, they could look at the individual betting patterns of gamblers that was significantly different from their usual play and bookmakers could compare those wagers at other books to identify industry betting patterns rather than those that were strictly placed at their own books. This ability to spot suspicious wagering convinced most leagues in Europe, including but not limited to FIFA, the ATP and WTA (tennis regulatory bodies), as well as some U.S. leagues including the NHL and MLB to set up memoranda of understanding with the UK books, where the books report and share any suspicious wagering to help curtail possible match fixing and provide the leagues with evidence to charge anyone connected with cheating. And the Tennis Integrity Unit (TIU) was also created to work with the ATP and WTA to help with disciplinary action for players suspected of cheating plus they provide education to tennis players explaining what to do if they are approached by organized crime and also to ramifications of cheating and being caught. There's no question that the Davydenko match wouldn't have raised much suspicion or resulted in any action if not for the ability of Betfair to spot the obvious cheating since the event was so minor.

The one recent match fixing scandal that comes to mind to North Americans is the Tim Donaghy scandal from 2007 where Donaghy admitted to and was charged with betting on NBA games including some in which he was officiating. Donaghy told 60 minutes that he didn't influence the results of games but made his bets based on games where he knew referees disliked one team and would surely make calls against a certain team. He highlighted games involving Allan Iverson where he knew certain referees despised Iverson and if they were assigned to the game it was almost a sure thing that the 76ers would have numerous calls against them and were unlikely to cover the spread. Donaghy claimed he won almost 80% of his bets and he placed it through a high school friend who made the wagers on his picks with illegal bookmakers. His betting was only discovered when the friend admitted to someone in the Gambino Crime Family that Donaghy was betting on games and winning at an astronomical pace. According to Donaghy the mob threatened to kill his family if he didn't give them the picks, so he agreed to do so receiving compensation of $2,000 per correct pick. Unfortunately for Donaghy one of the members of the Crime Family told an undercover FBI agent that an NBA referee was betting on games and wire taps proved to the FBI that Donaghy was that referee. Donaghy admitted to the betting and was sentenced to 1 year in jail after he agreed to cooperate with the feds, although he was exonerated on actual match fixing. The same analyst and author on match fixing suggested that the reason Donaghy wasn't exposed earlier is that he used a friend but more importantly did so with illegal bookmakers. Had he bet with online bookmakers or even in Vegas it's almost certain he would have been discovered:

"Anyone who wins over 60% of their large bets will be scrutinized by online betting software which is now also being adapted at Vegas sportsbooks, and winning over 70% of bets will really raise red flags. The software employed by the sportsbooks is so sophisticated that it's inconceivable that it would not have identified suspicious wagering, not only the unusual percentage of wins but the fact they were being won on 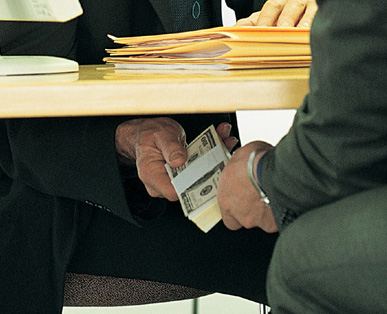 The analyst said that if Donaghy's friend had bet at an online sportsbook in the UK once the bettor was identified as a cheat, the event he was betting on would have been put off the board pending an investigation, the suspected cheating including all the details would have been reported to the UK Gambling Commission and the NBA and the bettor would have been black listed by the UKGC making it impossible to wager with any gambling company that comes under their jurisdiction.

The analyst also noted that underground betting in Vegas, most of Europe and Australia is almost unheard of because it's easier and more beneficial to bet with legal bookmakers. He suspects the reason most U.S. bettors including those with malice don't bet in Las Vegas is strictly due to logistics.
"If you live in Florida or New York why would you travel to Las Vegas to bet on an arbitrary game when betting with your local bookie is so much more convenient? If a New York casino took bets on the games with decent limits I can almost guarantee you that the vast majority of bettors, including possible cheaters would wager there rather than with their local."

Getting back to tennis, the TIU noted in articles leading up to the announced match fixing that almost all the match fixing occurred prior to the TIU coming into existence 9 years ago and since that time there have been few if any suspected incidents of match fixing. The TIU challenged the BBC/Buzzfeed to identify any match fixing that occurred since that time. The head of the TIU suspects that the decline is a direct result of the success of identifying and disciplining players and the fear by players that for a small reward their whole career could be jeopardized. And for that matter even in soccer, cricket and rugby the incidents of suspected match fixing have almost disappeared in the last few years probably for the same reason. The TIU has brought 18 successful disciplinary cases and imposed lifetime bans and fines on those it caught.

In all, the best way to combat match fixing is to legalize and regulate sports betting. While leagues like the NFL contend that the ability to bet on sports is what causes corruption that is simply putting ones head in the ground. Obviously the ability to bet on sports is what leads to match fixing but that's not the issue. The ability to drink alcohol also leads to drunk driving but the solution isn't to ban alcohol because as was proven in the 1920s, citizens will find a way to drink anyway, they'll just do it out of the public eye. Gamblers have wagered on sports since sports were invented and the NFL's success is largely due to the ease of betting on games. If not, then newspapers wouldn't publish point spreads and Vegas wouldn't be packed with bettors on Super Bowl weekend. The solution to combat match fixing is to bring the betting into the open by legalizing and regulating it so that sportsbooks can help identify suspicious wagering and the benefit of that will be a reduction in the amount of match fixing events as well as the number of illegal bookmakers. The decreasing number of match fixing cases in recent years and the very limited amount of underground sports betting in the UK and Australia is proof of both. Does that mean that by legalizing sports betting match fixing will end for good? Of course not. Where there's a will there's a way and crooks will always look for opportunities to cheat the system. But as has been proven in tennis the increasing chance of being identified and reprimanded is enough to convince many potential cheaters to think long and hard before actually going ahead with it, and that is certainly a good start.