Prediction site indicates SCOTUS to repeal PASPA, latest trends show it may not be a full repeal

Today Predictit.org, a real money prediction site, saw a 20% drop on the likelihood of PASPA being repealed. Do insiders have information that SCOTUS may no longer be favoring a full repeal?

While glancing over betting options on the possibility of PASPA being overturned, one site that caught my eye was Predictit.org, a political futures prediction site where one can trade futures on events happening for real money. The idea behind Predictit is effectively was the same concept that now-defunct World Sports Exchange invoked in the late 1990s, where they posted a line on an event and bettors could buy or sell shares in that event in hopes of generating a profit. It's also similar to the betting exchange on Betfair or Matchbook, but Will Jennings, the spokesperson for Predictit, said his exchange is different because they do not post the starting prices or markets and instead it comes from traders who request them. It's also different because the Division of Market Oversight of the Commodity Futures Trading Commission issued the company a no action letter to operate, meaning Predictit can allow individuals located in the U.S. to trade on these markets without fear of legal action from the SEC or the FBI. Under terms of the letter, action is limited to $850 per market and the number of active trades per market is 5,000.

Jennings explained the concept behind Predictit more clearly why it's legal and it is not really betting:

"PredictIt is not gambling but rather a forecasting tool that leverages the efficiencies of markets to analyze and quantify political risk. That information discovery process and the real time probabilities that come from the wisdom the crowd offers social value far beyond the small-dollar investments our traders are making."

Predict it has been operating since 2014 and Jennings said there are many advantages of playing at his prediction site:

"Prediction market technology is set to revolutionize how people follow politics, media, and especially finance by redefining how we calculate and manage risk. As a real time indicator of sentiment analysis, PredictIt's markets are more civically engaging and often more accurate than opinion polls.

Prediction markets have been shown to be more accurate than some opinion polls; in part, because having skin in the game promotes critical thinking and combats cognitive biases when making decisions — two exceedingly important skills for media consumers given the proliferation of "fake news." More important: political forecasting is a learnable skill and something you can practice at PredictIt."

I asked Jennings which markets are most popular on Predictit and whether the ongoing issues with Trump have generated more interest:

"Predicting what President Trump will do next drives a lot of political and financial news, so it's not surprising PredictIt has several markets tracking these public debates. We've seen a lot of user growth in the last year, and passive observers and members of the media are looking to PredictIt markets, too, to get a sense of certain event possibilities. One of our goals is to help inform these public debates, so we've been excited about the response and growing interest. Aside from Trump, U.K. politics have been popular, including Brexit last year, and we're seeing increased trader interest in Mexico and Brazil's upcoming presidential elections, too. Prediction markets can provide some insight into the potential outcomes of these geopolitical events, which are being watched closely by financial investors and policymakers around the world."

Jennings also stated there are markets beyond elections that generate interest too.

"Congressional legislative action, such as tax reform, and the recent U.S. government shutdown have drawn a lot of trader interest. Any market that has multiple variables to consider, such as how individual members of Congress will vote, attracts a lot of trader debate."

I asked Jennings if there was much interest in Russian politics given the ongoing scandal with Russia, but he said the site never posted anything on it because there really is no surprises when it comes to Russia:

"We haven't delved into Russian politics yet, beyond a couple of markets related to the recent presidential election. Needless to say, to many traders, the outcome of that election was pretty predictable, so it didn't have much appeal."

Jennings also indicated that there are certain issues Predictit will not list:

"Prohibited areas are markets relating to war, terrorism and assignation, and any regulated economic indicators."

Consequently, markets on which country will suffer the next terrorist attack, whether Trump will be assassinated or whether North Korea will launch a nuclear missile which are posted on some dark gambling sites are completely off limits at Predictit. Aside from being controversial issues, the site also wants stay above reproach and there is nothing enjoyable about rooting for a nuclear war.

To sports bettors and readers of OSGA one of the most appealing markets relates to SCOTUS and the case of New Jersey trying to get the Supreme Court to repeal the 1992 law that makes sports betting illegal outside of Nevada, Delaware, Oregon and Montana. 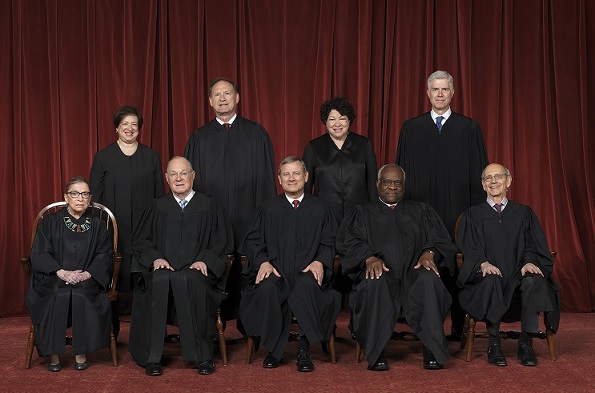 Jennings noted that the market on the SCOTUS decision has been trending for several months, ever since SCOTUS agreed to hear New Jersey's appeal:

"Current probability is an 89% likelihood that sports betting will be overturned. The market has been trending above 70 percent for the last 3 months."

The question as worded on the site is as follows: Will the Supreme Court rule against the federal sports betting ban?

The wording of the market means that SCOTUS must completely repeal PASPA for the "Yes" to be declared the winner and while it is true the market has been very favorable to a repeal there has been a distinct downward trend with a huge drop just today. Almost 500 shares were traded today (April 2nd), presumably almost all on the "no" and the market has dropped by 20% to just a 65% probability of the repeal. Some are posting comments questioning if this is due to insider betting by people connected to SCOTUS or whether it is an indication that SCOTUS will keep the ban in place and simply issue a partial repeal for New Jersey only. Should that occur it could cause a great deal of chaos among states that have already planned for legal sports betting and may be prohibited from doing so.

Thus far there were 6,703 trades made on the market since it was introduced in November 2017.

So, if this massive drop proves to be accurate it is quite conceivable all the plans by residents of states outside of Nevada to wager on sports may be out of luck. Let's hope not.