Passage of RAWA would be a big setback for democracy

This afternoon Congress is set to hear arguments relating to the Restoration of America's Wire Act (RAWA) and passage of the bill would be a blow not just to Internet gambling, but to overall democracy in the United States.

This afternoon Congress is set to hear arguments relating to the Restoration of America's Wire Act (RAWA) bill introduced last year in the House by Rep. Jason Chaffetz and in the Senate by Lindsay Graham. Chaffetz has already reintroduced the bill for 2015 and Graham is expected to follow suit shortly. For those unfamiliar with the Interstate Wire Act, it was a federal law passed in 1961 aimed at providing the DoJ a means to arrest organized crime leaders that were using phone lines to accept wagers on horse racing and sporting events. While the DoJ was worried about illegal gambling they were more concerned about how the funds from that gambling were being used by mobsters to fund other illicit activities. As such the Wire Act was 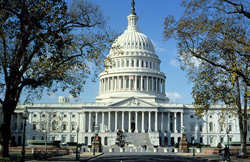 introduced and passed with the following definition of what was illegal.

The Wire Act has been successful and several crime syndicates have been stopped as a result of the act. In the 1990s, however, the Internet became the primary means of communication and offshore bookmakers started taking wagers from Americans by way of the Internet in countries that deemed the activity legal. Nevertheless, the DoJ at the time charged American offshore operators under the Wire Act claiming that the law intended all means of transmission both known and unknown to be illegal. Many will recall Attorney General Janet Reno's comments to American bookmakers that they can't hide offshore and they can't hide online. While most of the offshore operators either returned to the U.S. and pled guilty or stayed offshore where they couldn't be touched, Jay Cohen, a founder of World Sports Exchange returned to the U.S. to face the charges and argued that he was not guilty since the laws of Antigua, where his company was located and taking bets from, indicated that the activity was legal and thus superseded the Wire Act. His case was heard in a federal court in New York and by all accounts the jury was sympathetic to his plea but the judge charged the jury to ignore Cohen's evidence since it was not applicable to U.S. laws. Cohen was found guilty of violating the Wire Act and spent time in jail. While the courts never officially deemed that the Internet was applicable to the Wire Act, the notion was inferred from the case and the DoJ used that verdict to charge both David Carruthers of BetonSports and the founders of NETeller with breaking U.S. law.

The one question that was never really addressed, however, was whether the Wire Act applied only to sports or whether it was intended for all forms of gambling. The DoJ under the George W. Bush administration suggested that the Wire Act applied to all gambling, but it conflicted with the UIGEA, passed under the same administration, which provided exemptions to intrastate wagering, horse racing and lotteries. The wording of the 1961 law seemed to suggest that it was intended only for sports betting or contests, but that was never clarified in the 50 years the law was on the books. To alleviate confusion in 2010 the DoJ, under the Obama administration, stated its opinion that the Wire Act only applied to sports. Actually the DoJ was asked whether New York State and Illinois were permitted to sell lottery tickets via the Internet or out-of-state processors to its citizens as was permitted under the UIGEA and if so whether they had to reword the Wire Act to clarify this. The DoJ instead indicated there was no need to make any changes since the Wire Act since it was never intended for anything other than sports. The relevant part of that opinion was as follows:

"Having considered the Criminal Division's views, as well as letters from New York and Illinois to the Criminal Division that were attached to your opinion request, we conclude that interstate transmissions of wire communications that do not relate to a "sporting event or contest," 18 U.S.C. § 1084(a), fall outside of the reach of the Wire Act. Because the proposed New York and Illinois lottery proposals do not involve wagering on sporting events or contests, the Wire Act does not, in our view, prohibit them. Given this conclusion, we have not found it necessary to address the Wire Act's interaction with UIGEA, or to analyze UIGEA in any other respect."

The conclusion by the DoJ was obvious but it nonetheless did not satisfy all parties. In particular, Sheldon Adelson, owner of the Las Vegas Sands suggested that the DoJ opinion was wrong and has waged a campaign to stop online gambling. Several sources close to the situation have told me that Adelson originally was not opposed to online gambling, but when he was given an indication that he would be a small drop of water in a big pond that would be dominated by Caesars, MGM and PokerStars he recanted and waged all-out war against online gambling. Adelson believed that if online gambling was stopped in its tracks then Americans would have no choice but to go to land-based casinos to gamble, where the Las Vegas Sands is a major player. Nevertheless despite Adelson's objections online gambling proceeded starting with Nevada and later New Jersey. And several other states are set to follow suit.

Realizing that it's now or never, the billionaire Adelson "encouraged" several celebrities and politicians to come to his side and tell Americans and the courts about the dangers of online gambling. In particular he stated concerns about money laundering, underage gambling, problem gambling and unscrupulous operators. The fact that all these things are just as possible, if not more probable, in land-based casinos seemed irrelevant to Adelson nor was the fact that operators had to pass a rigorous test to get a license in any state and those licenses would most likely go to the large established land-based operators. In fact in New Jersey only casinos with an Atlantic City physical address can operate online gambling and any offshore companies had to set up partnerships with Atlantic City casinos and must be approved by the New Jersey Division of Gambling Enforcement. Regardless, Adelson had a mission and he wasn't going to be stopped.

"If Adelson is successful it would be a blow to democracy."

He started by setting up a website called stopInternet gambling.com and later, seeing he wasn't getting much traction, instead took a new route. He enlisted Chaffetz and Graham to introduce a law in Congress that would deem the 2010 DoJ opinion wrong and take the country's laws back to before 2010 when the courts were unsure if non-sports betting applied to the Wire Act but acted as if it did. Unfortunately the movement has gained a lot of traction including support from Steve Wynn, who also realizes he'd be a small fish in a big pond online and possibly from Harry Reid, the Democratic Senator from Nevada. The bill is mostly supported by Republicans but does have bipartisan support. A failed attempt was made to attach the bill to an omnibus spending bill in December but Chaffetz has already reintroduced the bill in this Congress and Graham is expected to follow suit. John Pappas from the Poker Player's Alliance suggested that this attempt was counterproductive and that all the doom and gloom suggestions by the anti-gambling groups have never materialized since Internet gambling was introduced in Nevada, New Jersey and Delaware.

The three main problems with RAWA

First, the name of the initiative is misleading. The Wire Act still exists and still applies to sports betting on the telephone and Internet so you can't restore something that was never taken away. But I guess Restoration of the Old Opinion on Wagering relating to Non-Sports Gambling Online (ROOWNSGO) just doesn't have the same appeal not to mention the fact that indicating he is trying to reverse an opinion would likely cause politicians to actually look at the original act and the opinion to see if the new opinion by the DoJ was valid. There's no question that Adelson is hoping for support just based on his name and his contributions.

Second, since Adelson has made his billions from gambling and still operates casinos worldwide, his attempt to block online gambling is hypocritical. It has nothing to do with concerns about gambling but rather protecting his land-based operations. When the law was first introduced an industry analyst emailed me about just how ridiculous Adelson's arguments were.

"This attempt by Adelson would be similar to Barnes and Noble trying to make e-books or purchasing books on the Internet illegal because in their view acquiring reading material that way is immoral and goes against American values. Everyone and their dog, of course, would understand that the only reason Barnes and Noble is introducing this bill is because they can't compete with Amazon and fewer people have attended their land-based stores because of Amazon.com but Barnes and Noble has enough money to persuade politicians to come to their side. Fortunately that never happened because Barnes and Noble realizes that the Internet is the future and thus set up their own website to sell books but it appears Adelson can't envision that the Internet can help him too. Of course when you're a thousand years old, set in your way and can buy politicians I suppose you don't have to think logically."

Third, if Adelson is successful it would be a blow to democracy. Laws are amended all the time as issues change and the new amendments remain valid until some new reason comes about to change the law. In no instance has a law been amended to take it back to "the good old days" because the new government didn't like the last opinion. If this bill is indeed passed then what would stop governments from using this decision to change laws it doesn't like, not because it's progressive but rather because they liked the past better. What would stop a government from taking away a women's right to vote if the government of the day was sexist and misogynous? What would stop a government from reintroducing prohibition because their current largest supporter didn't like drinking? Opinions are changed for a purpose and the truth is that the only reason Chaffetz and Graham are even interested in reversing the DoJ opinion is because of their dislike for Obama and more importantly because they are relying on Adelson funds to help them win their next election bids.

American values deem that all men and women are created equal, that politicians work for the best interests of the citizenry and wealth can't change that. If RAWA does pass then American values will be defeated and the glaring truth will be known that money indeed can buy political favor. Let's hope that RAWA never gets off the starting line.