Oprah as president could be good for gambling interests

While Oprah hasn't officially thrown her hat into the 2020 U.S. Presidential ring yet, Hartley attempts to uncover if an Oprah presidency would be good for gambling.

Oprah Winfrey was never seriously considered as a presidential candidate until her acceptance speech at the Golden Globe awards, but the speech was so powerful that several important people suggested she could be a viable candidate in the future. In fact, her odds dropped to as low as 20/1 at William Hill and other sportsbooks to be the President in 2020. As many know Oprah stated afterwards she has no interest in politics, but the fact that Donald Trump decided to run and got elected makes anything possible. So, with the Academy Awards taking place this weekend there's no question that rumors and speculation regarding Oprah running for President will abound again and as a writer for the gambling industry it got me wondering how Oprah would be for gambling interests if she ran and won. I Googled 'Oprah and gambling' but aside from odds on her winning I found nothing. It seems on the issue of gambling Oprah has never expressed an opinion.

I thus spoke with a couple of Oprah aficionados, Joan and Shelly and asked them that specific question. The two, who claim to have watched nearly every Oprah episode, read almost all her magazines and her self-help books and claim to be the biggest Oprah fans, both suggested that, in their opinion, Oprah would be good for the gambling industry. Without saying it specifically, they claim Oprah does not believe in any organized religion, so unlike the Republicans under Bush, who tried to preach their brand of evangelical neoconservatism (which of course included an anti gambling stance that led to the passage of the UIGEA), Oprah has never preached or tried to force her beliefs on anyone. If she has an issue with the gambling industry she never said so.

"When Oprah talked about her drug use with her boyfriend in the 1980s, she never preached about the dangers or said that police fell down on the job because they failed to crack down on drug dealers," Joan said to me "she simply said that she had to accept that it had become a part of her life and the only way to kick drugs was to dump her boyfriend who got her using cocaine. That is one thing Oprah has constantly said – people need to make their own decisions in life and accept both the rewards and consequences of those decisions. And when she lost all the weight, she never put down anyone who was obese, she simply gave them the facts and told them to decide for themselves whether food is worth the risk of a heart attack later in life. I remember Oprah bringing out a big tub of fat on stage and told people that this is what they were carrying around with them if they were overweight. She just wanted to give them the information, but she said that whether they decided to do something about it or not was naturally the individual's decision." 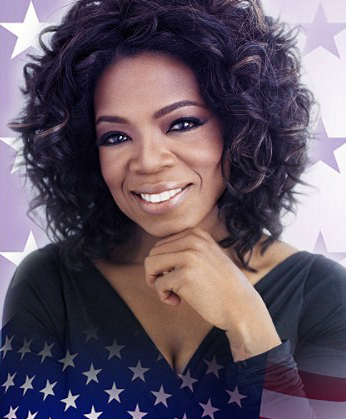 Shelly went further and said that in an episode of Oprah on her OWN station she had a woman on the show from Britain who had lost the down payment for a house to an online gambling company and was afraid to tell her husband. The woman told her husband she lost a few hundred pounds instead of the 100,000 pounds or so that she truly lost. In that episode Oprah and her guest never decried the evils of gambling, they never said that she should be ashamed to have been involved in the devil's game or anything like that and they never mentioned the online gambling company let alone called them out for taking the bets. Instead they told the woman to own up to what she did, tell her husband the truth and face the consequences. Plus, they suggested she get help for her compulsive gambling, but that was it."

The two also pointed out that on many issues Oprah is very Libertarian and has never told people they need to be protected from themselves. On issues like teenage pregnancy (she was 14 when she was raped and impregnated herself), gay marriage, gender reassignment, alcohol use and even religion Oprah told guests on the show that they have to decide for themselves, but to try and make an informed decision. And In the book the Gospel According to Oprah, the author, Marsha Z. Nelson, notes that Oprah is a great spiritual leader, not because she tells people what to do in life, but rather asks them to do a self examination, confess their mistakes and when necessary ask forgiveness. But the decision of what is right and wrong is not up to the religious leaders to decide, but rather the individuals.

Joan also said that she saw Oprah onstage with Cher and Tina Turner at Caesars Palace a few years back and while she couldn't say for certain she was fairly convinced she saw Oprah playing the slots that day. But for certain, she didn't say anything negative about the casino itself or the gamblers at the show. She simply asked if they were winning and having fun.

So, does this prove that Oprah would be good for the gambling industry in America if she were to become president? Of course not.

It's quite possible that Oprah may be very opposed to any gambling expansion. But what we can be assured of is that she won't be beholden to the religious right as many in the Republican party are currently, she won't be beholden to Sheldon Adelson as the current Republican party is and based on prior comments she won't blame the industry or even the individuals who get in trouble because of gambling. She'll simply suggest a self examination and self help. And as president, she may try to get a bill introduced by Congress to provide more help to people who struggle with addictions, but again the decision is up to the individual.

Most importantly, Oprah is a great businesswoman and will certainly look at what is best to grow the economy and create jobs, but unlike Trump she won't do so in a confrontational manner or in a way that will put the U.S. at odds with the rest of the world. And like it or not the casino industry along with lotteries and racetracks are important businesses in the U.S. that employ thousands of Americans and help grow the economy.

Oprah is still 20-1 in the odds, but if she does decide to run there is no doubt she would immediately become the betting favorite. And that could be good for the gambling industry and for American gamblers.