New regulations and laws around the globe on Internet gambling are making choices difficult for some of the worlds largest online gambling operators.

When John Kyl proposed a law to ban online gambling to American citizens in the late 1990s many in the industry balked at the suggestion. The general viewpoint was that the internet was a global medium that should not be censored or regulated and furthermore other countries had a right to pass their own laws and it wasn't up to individual countries to enforce their laws on foreign jurisdictions even if they didn't agree with them. But it seems that Kyl may have been ahead of his time.

Almost two decades later most countries have chosen to try and enforce local gambling laws either by banning online gambling or putting in very strict regulations that attempts to shut out or tie the hands of offshore operators.

The United Kingdom was one such jurisdiction and for the longest time the government was only happy to accept offshore operators catering to UK customers online and advertising in the British Isles provided they operated in a jurisdiction that held a white paper listing (a list that indicated the country where the operator was located adhered to the regulatory requirements of the UK Gaming Commission). But in the last few years things changed. The UK began to realize they were losing a lot of potential tax revenue from UK citizens wagering at companies located in places like Alderney or Gibraltar instead of at UK based gambling sites so the UK decided to put in place a law that ensures they would get tax revenue from British citizens regardless of where the company they are betting at is located. In particular the new law requires companies to obtain a UK Gaming Commission license (UKGC) if they want to cater to UK citizens and they have to remit a point of consumption tax of 15% from any wagers from UK citizens. This is applicable regardless of where the company is operating. So even if a company is operating in the gambling tax haven of Malta the company still must keep track of revenue from UK bets and submit 15% of that revenue to the UKGC. Moreover in order to keep the UKGC license the company must justify their presence in grey markets or black markets if more than 3% of their revenue comes from any of those jurisdictions and they have to show they are adhering to local laws if less than 3% of revenue comes from grey markets. 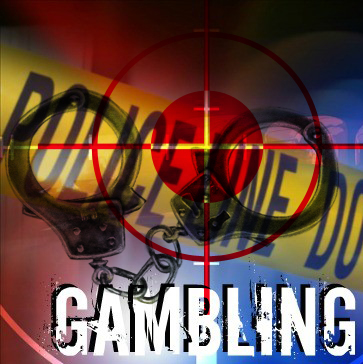 The number of black markets, i.e. markets where offshore gambling is expressly forbidden is a bit larger than white markets although black markets are usually in Muslim countries where all forms of gambling are illegal (examples being the UAE, Bangladesh, Pakistan, Qatar, Jordan, Kuwait, Bahrain, Afghanistan, Palestine, Kenya, Mozambique, Iran, Iraq, Syria, Libya and Yemen), in communist countries which want to control all aspects of their citizens (examples being Cuba, North Korea and mainland China) and in the United States which made offshore gambling illegal with passage of the UIGEA in 2006. It should be noted that China is often listed as a grey market in articles but the laws of China specifically make it illegal for gambling companies to operate or for Chinese citizens to make wagers of any sort and both gambling operators and citizens can be arrested for illegal gambling. That said it's understood that friendly games between citizens occurs frequently and the Chinese government is generally uninterested in friendly games. Chinese citizens can also legally venture to Hong Kong where horse racing is legal as are some other offerings by the Hong Kong Jockey Club or to the special administrative region of Macau located just off of both Hong Kong and the Guangdong province of China where all forms of gambling are legal. China also really has no way of dealing with offshore gambling since they don't have any extradition treaties with Western countries nor do they have any way to effectively monitor online gambling so it goes on virtually unpunished. However, if anyone is caught gambling illegally or promoting an illegal website the Chinese government can be quite strict.

China recently imprisoned four citizens for playing at Bet365 and two citizens for promoting Bet365 on a blog. The easy solution for most companies would be to simply withdraw from the Chinese market but China represents such a large percentage of players that doing so could effectively bankrupt many of these companies who have a huge percentage of their players residing on the Chinese mainland. Thus most companies continue to operate in China in violation of local laws and simply put up the standard "play at your own risk" warning. China aside, companies that try to adhere to local laws have mostly withdrawn from the other black markets or never catered to them at all, but rogue operators that have set up shop and hold licenses from places like Costa Rica, Panama, Kahnawake and Cyprus aren't too concerned about breaking local laws so they continue to offer gambling to citizens in all market types. The owners of those sites likely have no plans to travel to those areas so they are willing to take the risk.

The vast majority of countries are grey markets, i.e. they aren't black or white. In those countries gambling isn't illegal but there's also no law on the books that makes it legal. Many of those countries have never tried to even address remote gambling or have just recently tried to address it. The grey markets tend to fall into 2 categories. The first category are countries where gambling is legal but restricted to government monopolies. In those cases it is generally understood that only the monopoly can offer gambling so all other companies that provide gambling and are not government entities are operating illegally. At the same time those jurisdictions have no means or intentions of enforcing laws against foreign operators. Examples of countries in the first category would be Canada, France and Germany. In Canada and France only the horse racing industry and the provincial lottery monopoly are authorized to own and operate all forms of gambling but in both cases there's no means or desire to take action against individual bettors who choose to place bets at foreign sites nor are there any plans to go after foreign operators. The second category is countries that have given special consideration to major companies to take bets from their citizens and in return pay a large portion of the winnings back to the country's coffers. Examples of the second category are Australia, Italy and Spain where they have opened the door to offshore gambling but require companies to buy a license and agree to strict regulations including paying a tax to the government. Many of those countries including Spain and Italy also require the companies to set up shop within their borders unlike the UK which is allowing companies to operate in other jurisdictions. Not surprisingly these restrictions shut out most small offshore operators who could never compete under such rules. Many companies believe that these restrictions are illegal and some companies have filed complaints with the EU. But while the EU seems to be sympathetic to the operators even ruled against the Germany and France it seems those countries have no intentions of abiding by the EU decision.

What has been causing a the most confusion in the industry are countries that are saying they want to legalize and regulate remote gambling but put have no means to actually do so. Prime examples of that is Romania which passed a law recently that makes it illegal for citizens to gamble with "unlicensed operators" but unlike the UK it's not possible for an offshore company to get a gambling license from Romania thereby making their regulatory scheme irrelevant and consequently all remote gambling illegal. Another example is Singapore which has issued a plan to regulate online gambling for only some companies, but Singapore law has no provisions that would allow companies to actually acquire a remote gambling license so again the new "legalization and regulation plan" is a farce because there's no way of implementing it.

Needless to say all these new laws and so called regulations are causing confusion for both online operators as well as for those involved in analyzing the industry. As a result Ladbrokes has chosen to simply withdraw from almost all the grey and non-Chinese black markets. Clearly Ladbrokes seems only too willing to go back to being a UK based shop catering to UK citizens. PokerStars, Bwin.Party, William Hill and Bet365 also have a similar mindset. However, they have withdrawn from different countries than Ladbrokes either because they have a different opinion over which countries are truly grey markets or more likely because they have enough customers in some of those markets to justify the risk. The companies that are really in limbo are the non-UK based companies that want to adhere to local laws but would go under if they left all the grey markets. A prime example of that is Pinnacle.

The Curacao based company has recently acquired new management and is hoping to obtain a UKGC license. They withdrew from the U.S. a few years back and have recently announced they will no longer cater to UK residents until such time as they acquire a UKGC license. But to have any chance of acquiring that license they would have to stop catering to Asian grey and black markets and that is clearly out of the question since their whole strategy since withdrawing from the U.S. has been to focus on the Asian market. If Pinnacle withdrew from China, Hong Kong, Singapore, Malaysia, the Philippines, Korea etc. they may as well close shop since most of Pinnacle's customer base would be gone.

So John Kyl would certainly be smiling now if he was paying close attention to the remote gambling situation worldwide. Compared to what many countries are doing now, the 1997 Internet Gambling Prohibition Act is quite moderate. After all Kyl simply wanted to make internet wagering illegal in the U.S. He would never have considered creating a law that would allow a blogger to be imprisoned for promoting an offshore gambling site nor would he have considered creating a licensing scheme that was a sham because it is impossible to actually receive a license.

Yet that is what is happening in jurisdictions around the world and companies have to figure out a way to either comply with new regulations or simply leave those grey markets for firmer footing. Of course to do so they would have to accept a huge hit to their bottom lines which in turn means layoffs, less tax revenue and a new strategy going forward. The only ones who benefit from all these new regulations are underground bookmakers and "rogue gambling sites" that never intended to abide by local laws and are only too happy to take the customers that are left behind.