After seeing the Nashville Predators' fans in the Stanley Cup, Hartley examines why home field advantage has so much value in certain arenas and stadiums around the globe.

How much is home field advantage worth at the betting window?

The question about how much home field/court/ice advantage is worth has always been perplexing to bettors. There's no question that teams tend to be better when playing in friendly confines but just how much is home advantage really worth? As a general rule American bookmakers attribute more value to being at home based on the sport being played. Basketball without question has the most value to the home team just because of the atmosphere and the knowledge players have about their own courts and that is generally followed by football, baseball and lastly hockey. So, it was kind of shocking when I found that the money line on the Nashville Predators at home was larger than the money line on Pittsburgh when they play at home, even though Pittsburgh was a heavy favorite to win the series. Home ice advantage in hockey, after all, is not supposed to mean that much. After watching the first game in Nashville it was evident why the extra emphasis was given to Nashville when playing at Bridgestone Arena.

Bridgestone Arena, known as "Smashville" provided one of the most electric atmospheres I've ever witnessed, not only in hockey, but in any sport. And it's clear why opposing teams generally dread entering that arena. Unlike most hockey arenas where the good seats are filled with businessmen who receive tickets as a tax write-off or who are clients of corporations, Nashville's seats are almost completely filled with die-hard fans and country music stars. Keith Urban and Carry Underwood commonly sing the national anthem spurring on the fans and players more and the arena is completely gold and black as over 90% of the fans wear Nashville Predators shirts. Add to that the banners and lights in that color and one would think they're playing in a bee hive. The streets outside Bridgestone Arena are filled with screaming fans and everyone knows they are there, but what makes the atmosphere most electric is what is known as cellblock 303. 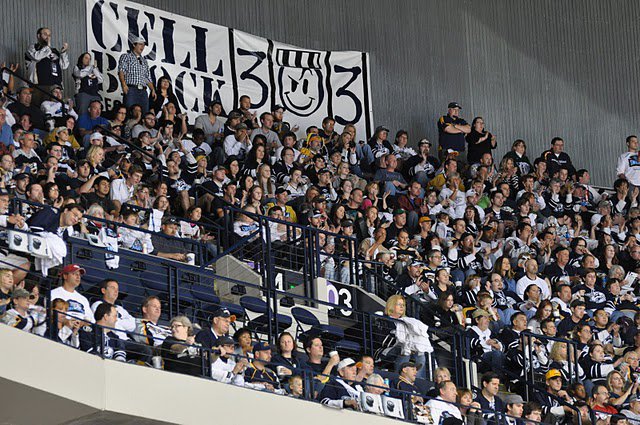 The history of cellblock 303 actually started when Nashville only had a minor league team and fans in that section would taunt the other team. They made it so enjoyable that the Nashville Knights junior league team sold out games. When Nashville was granted an NHL team 3 fans of the Knights bought seasons tickets in section 303 and decided to make the section a party atmosphere. It spread to neighboring sections and eventually to the whole arena. But, the taunts and chants always begin in that section.

Some of the more famous chants include "that's one" after the first saber tooth roar (symbolizing a goal), "that's two" after the second saber tooth tiger roar "and that's three. Thank you (opposing goalie's name) may we have another? He shoots he scores. You suck!"

When the opposing players ice the puck to kill time the section sings "if you're crappy and you know it ice the puck" to the tune of "if You're Happy and You Know It."

If the game gets boring they yell "Hit somebody. Hit anybody. Hit everybody."

But the one taunt that has been the most effective occurs after a Predator's goal where the crowd chants "(opposing goalies name) 3 times and they a loud "you suck". This is followed by chants of "it's all your fault, it's all your fault."

It may sound childish and something that wouldn't bother professional players but many visiting teams stated that it does indeed become an issue. In fact, Pittsburgh Penguin's goalie Matt Murray admitted that the chant it's all your fault did indeed start bothering him after a while. And the proof is in the pudding. Nashville has had one of the best home records for years and in this year's playoffs they have 9 wins and only one loss in 10 home games. Only Madison Square Garden in New York is said to be close to as intimidating as Nashville.

Team management has embraced the rowdy section, unlike other arenas where management would probably try to tame them, and even erected a banner over the section labelling it cellblock 303, with approval of seasons ticket holders in that section. According to section303.com website, the section is filled with characters who embrace their notoriety:

"There are lots of characters in the Cellblock like "The Perv," "The Librarian," "The Duke of Rebuke," "Flag Boy," "A Boy Named Sioux," "Red Beard," "School Marm," "The King of Pop,"and so on," the website says.

And without question the Nashville announcer, Paul McCann, helps to make sure the atmosphere stays electric.

But Nashville is just one team where bookmakers must put some additional emphasis on home advantage when creating odds. In the NFL New England, Green Bay, Seattle and Denver are without question the toughest places to play for opposing teams. The rowdy fans at Gillette Stadium makes it difficult for the opposing team to not only concentrate, but also to hear signals and the same is true at Seattle's Century Link Field. In Green Bay and Denver, not only are the fans truly the extra man, but the bitter cold weather and snow clearly benefits the home team. And in Denver the altitude at Mile High Stadium gives the Broncos a huge advantage over teams who have an issue adjusting.

In Major League baseball, the New York Yankees and Boston Red Sox are always given extra juice when creating a line when they play at home not only because of the rowdy fans who tend to spur their teams but also because the home team players know how to play the ball well when hitting the walls in the oddly shaped stadia. And more recently Rogers Stadium in Toronto and U.S. Cellular Field in Chicago are becoming notorious for being intimidating places to play in.

I spoke to a colleague who attends sporting events around the world for a column he writes and he said that he never experienced anything in North America like game 3 at Nashville. In fact, he claims the only sports he would compare to the rowdiness at Bridgestone Arena are soccer stadiums and some are more intimidating than others. Some examples include San Siro stadium in Milan which is home to both AC Milan and Inter-Milan. The fans there are so rowdy and raucous that opposing players are known to have people keep an eye out on the fans for fear of being injured by the fan base. The same holds true for the soccer stadium in Moscow. A bookmaker at one of the UK's largest gambling companies was quoted in an interview that their sportsbook adds an extra 20 points than they would for other home teams when Milan plays at home just because it is so intimidating. Similarly, Old Trafford stadium where Manchester United plays is so difficult for visitors that bookmakers always give the home team lower odds than usual. The most intimidating soccer stadium is La Bombonera, in Argentina, where fan bases are so loud and so crazy that the stadium is actually known to shake when they cheer.

So to answer the question as to how to value home field advantage the answer is that it depends not only on the sport, but also on the fan base. If anyone has not had a chance to witness the intense and crazy atmosphere in Nashville, the teams play game 6 at Bridgestone Arena on Sunday night. My money will be on The Predators even though I know I'll be getting lower odds than usual.