Malfunctioning slot machines continue to cause frustration and skepticism

Since the advent of electronic slot machines there have been many instances of players not getting paid jackpot prizes due to software errors and there's not much gamblers can do about it.

In 2011, an Alabama man, Jerry Rape won a $1.4 million jackpot on an electronic slot machine at the Wind Creek Casino in Montgomery, which is owned and operated by the Poarch Band of Creek Indians. Rape's excitement was soon doused when the casino said they had to look into the win, indicating they were trying to find a way not to pay. According to Rape, he was detained for 24 hours and threatened before finally being told the machine had malfunctioned and was let go without receiving any winnings.

It's uncertain what proof the Poarch Band of Creek Indians had that the machine malfunctioned but it appears whatever it was, they weren't prepared to tell anyone what they discovered. Rape tried to sue the casino at the tribal court of the Poarch Band of Creek Indians but they informed him that as a sovereign nation the band had immunity from lawsuits involving fraud and simply dismissed his complaint. As a last resort Rape sued the band in the Alabama court system and last week, 6 years after apparently winning the jackpot, Rape was told by the Alabama Supreme Court that the only courts that could hear the case was at the tribal courts, since the win took place in a sovereign state and was out of Alabama's jurisdiction. With the tribal court already telling Rape to take a hike, it's clear that Rape will just have to think about what may have been.

Of course, Rape isn't the only person to be informed that they won't be paid due to a malfunctioning slot machine. In 2015 Veronica Castillo was denied an $8 million win at the Lucky Eagle casino in Rochester, Oregon. The casino claimed it was a display error and because there was no progressive jackpot on the Jurassic Riches slot machine and the maximum payout she could get based on her bet was $6,000, thus the win was impossible. The software manufacturer claimed it ran the algorithm and the real payout should have been $10.50. Castillo claimed the casino was defrauding her and their argument didn't hold water as there was no indication of the maximum amount the machine could pay. The casino offered her a hotel room, dining voucher and free play as compensation. It appears Castillo didn't sue the casino as lawyers felt she would have had no case.

Also in 2015 Pauline McKee, a 90-year-old woman believed she won $41 million at the Isle Casino in Waterloo, Iowa on the Hello Kitty slot machine. She sued the casino but lost when the Iowa Supreme Court said she had no case since the maximum payout on the machine was $10,000 and the "$41.8 million bonus award" the machine indicated was illogical. McKee instead was awarded $1.85 and legal fees. 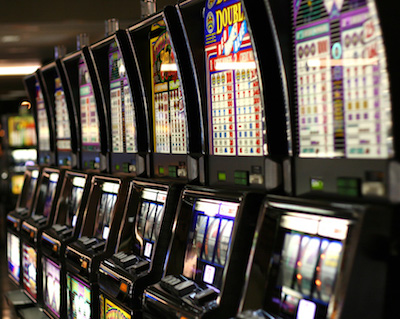 In Canada, last year, Paul Kusznirewicz apparently won $43 million on a Buccaneer slot machine (a 2 cent per spin play) at Georgian Downs casino just south of Barrie, Ontario. Ontario Lottery and Gaming, the owner of the casino, told him he didn't win because the maximum payout was just over $9,000 and offered him dinner buffet coupons instead. Apparently Kusznirewicz has sued the OLG, but, like Castillo, has no case because the maximum payout is far lower than what the machine displayed as the winning amount and all slot machines have a sign on them that reads "malfunction voids all pays and plays."

And the most notorious case, occurred in Queen's, New York last year when Katrina Bookman played the Sphinx slot machine at Resorts World Casino and apparently won $43 million. She took a selfie with the machine showing the win. But, when she went to collect, she was told the machine was broken and she only won $2.25. The casino offered her that amount and a steak dinner. Bookman sued the casino for fraud and her lawyer decided to take the case to the media hoping for public support. He is adamant that the casino can't have it both ways. The lawyer said they can't claim that a machine is broken only when they want it to be. The New York Gaming Commission informed her that she had no case since the maximum payout on the machine is only $6,500, but the suit apparently is set to go forward, although it's clear Bookman won't win.

Some industry analysts suggest that if there is a software glitch it's due to poorly designed or maintained slot machines and the casinos should pay the "winners" and try and recoup the money from the slot machine manufacturers. In the very least they should offer a much larger form of compensation than the pittances they are. One analyst I spoke to gave me his reasoning:

"If the 90-year-old woman was offered the $10,000 maximum prize the machine allows as compensation rather than $1.85 it would have won the casino far more goodwill and understanding by both the media and other gamblers. But the settlement they arrived at was an insult. $10,000 is nothing to a casino and they could have just written it off as a cost of business."

Casinos, however, don't want to set that precedent.

One casino, however, did indeed pay a winner the amount displayed and went after the slot machine manufacturer for the difference. In 2014 a woman won $100,000 at the Lake City Casino in Penticton, British Columbia on Dragon Fever slots, even though the maximum payout was supposed to be $1,000. A spokesperson for the B.C. Lottery Corporation explained their reasoning for paying at the time:

"In this particular case BCLC could verify that a jackpot had occurred, but we were unable to confirm that the amount was anything other than what had been displayed on the screen. We couldn't confirm what the jackpot amount was supposed to be. Therefore, accordingly, we determined the appropriate course of action was to pay that erroneously displayed prize amount to the player.
There was no evidence the woman influenced the jackpot or otherwise exploited the machines."

Consequently the B.C. Lottery Corporation paid the woman the full $100,000 and went after Konami who made the slot machine for the difference. They also removed 189 similar machines from the casinos to inspect them to make sure the same incident wouldn't occur. 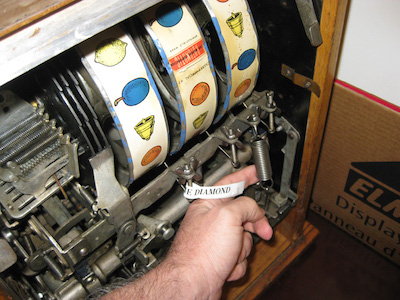 The issue of malfunctioning slot machines seems to be a fairly recent phenomenon. The reason for the malfunctions apparently relates to the complexity of the software in the slot machines and the issue has been accentuated by the huge jackpots that many of these machines can pay. Prior to the 1960s, old style slot machines used randomly spinning drums which were virtually impossible to malfunction and the maximum payout was usually no more than 100x the bet. And the early electro-mechanical machines in the 1960s and 1970s were unsophisticated with low maximum payouts. So even if one did malfunction it likely wouldn't be noticed as slots offered a fairly small return.

But today the machines are essentially video games and some offer progressive jackpots in the millions of dollars. The progressive jackpots are usually run at a combination of casinos across states and funds from those machines is put aside. Consequently, when a jackpot is won all money won from the bank of machines that was withheld at all the casinos is sent to the casino where the patron won to pay the prize. Thus, if a jackpot is won all casinos involved with the slot will want proof that it was won legitimately and they won't allow a jackpot to be paid if there is a glitch. In the old days the risk wasn't nearly so high. If a person should have won 50 nickels but was paid 200 nickels the casino managers weren't going to lose sleep over it.

The Nevada Gaming Control Board explains how and why a machine malfunctions and what the recourse is in its FAQ section:

Q: What happens when a machine malfunctions?
A: When a malfunction occurs the slot machine will normally not accept additional coins nor play existing credits, the lights on top will flash, the readout on the face of the machine will likely flash or display an unusual number or code (example: 3300 code), the reels may stop briefly then rotate or spin slowly, or there may be an on-screen indication of the problem, such as "hopper empty" or "call attendant."

Q: Why do slot machines malfunction (tilt)?
A: here are over 209,000 slot machines normally operating 24 hours a day 7 days a week in Nevada and unfortunately, on rare occasions, there are malfunctions. Malfunctions occur for a variety of reasons including, improper tampering, coin jams, empty hoppers, switch failures, computer chip failure, power outages and accidental contact (bumping).

Naturally much of this doesn't apply today. A lot of the reasons provided by the Gaming Control Board are no longer relevant since machines don't take coins and they are affixed to tables and can't be bumped which means that the malfunction due to a tilt (a term not heard since pinball machines) makes no sense. And with cameras everywhere it's hard to see how tampering can take place. That means the only viable concerns for malfunctions would be either the result of a power failure or a computer chip failure. Power failures would have been a concern in the 1970s or early 1980s, but with sophisticated computers running the games today a malfunction due to a power failure is almost impossible. Most machines have a memory backup and in case of a power failure the machine will simply restart the previous game when power is restored. And the games have logs to indicate where the game should have picked up when power went out. Consequently, the casino will always point to a software glitch as the error and that's the big problem. Software errors are not clearly evident and many times even the slot machine manufacturers can't give a viable reason for the glitch. This causes a big mistrust by the public who are basically told "sorry you didn't win. I can't tell you exactly what happened or why it happened. You just have to trust us." It's also a reason many lawyers believe they have a case against casinos, because there is no concrete way to prove a computer had a software error and in their minds the sign reading malfunctions voids all pays and plays is vague and unenforceable.

In any case these incidents need to be stressed to make the public aware that every win at a casino can be voided at the casino's discretion and the courts will rarely if ever side with the gamblers. And in the instance of Indian casinos, only the tribal courts can help the player, but they will simply side with the casino's decision in the vast majority of cases. It appears the old cliché is true. In the end, the casino never loses.