The return of John Kyl to the U.S Senate has gamblers and operators worried about the recent changes in America's online gambling laws.

John Kyl's return to the Senate is ominous for gamblers

When John Kyl was announced as interim Senator to replace John McCain in Arizona, it was met with a lot of frowns by bettors. For those unfamiliar with John Kyl’s influence over online gambling, he was the person who spearheaded the U.S. government attack against online and offshore betting. Kyl’s efforts are also the prime reason why online gambling is a blip on the radar in the United States and is thriving elsewhere in the world, providing foreign governments huge tax revenue, while the U.S. government misses out.

Internet gambling really began in 1996 when the island of Antigua passed legislation to host online gambling sites. Prior to that time there were many offshore gambling sites allowing phone in bets from U.S. citizens, such as Bowman’s International, World Wide Telesports and SBG Global, but they were all phone-in books since the Internet was not yet a viable form of communications. Intertops was the first operation to offer an online gambling platform from its offices in Austria and, while they took bets worldwide, they couldn’t attract much action from outside of Austria because of a hefty tax on bets, making it all but impossible for bettors to win. But Antigua offered a tax haven and an excellent online infrastructure, so Intertops moved there and quickly became one of the top sports books in the world. Other websites such as WSEX, Carib Sports and SOS opened shop in Antigua as well, while other sportsbooks and casinos started operations shortly after in other parts of the Caribbean and Central America, such as Costa Rica, Jamaica and Curacao. And sportsbooks like WWTS and Bowmans eventually went online as well. These gambling ventures not only provided U.S. citizens the ability to wager on their favorite sports or games, but they also provided hefty salaries to workers in those operations. Reports indicated that the average worker at an Antiguan sportsbook made more than 3 times the salary of workers in other professions.

Seeing the success of the industry, the United States government had only three options. They could legalize it stateside and reap the rewards as many other democratic countries like the UK, Australia and Germany decided to do; they could partner with the Caribbean countries and agree to authorize the websites, provided the U.S. government got its cut; or they could stick their heads in the sand and try to ban it. As we know the U.S. government decided on the latter.

In 1997 he introduced the Internet Gambling Prohibition Act, a bill that aimed at amending the 1961 Wire Act to specifically ban online gambling. The law not only would penalize operators but gamblers as well. Upon introducing the bill Kyl tried to invoke children as a reason the bill needed to be passed into law:

"Children can access Internet gambling sites on the family computer, wager with Mom’s credit card, click the mouse and lose the house." 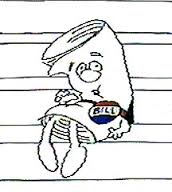 As illogical as the argument was, it passed in the Senate by a 90-10 margin, but got held up in the House due to complaints and pressure from the horse racing and lottery lobby as well as concerns by Indian tribes and the Internet service providers. The bill made all online gambling illegal and penalized everyone, which the House realized would never sit well with the public. So, in 1999 Kyl tried again and co-sponsored a revised version of the bill that lifted the penalties against gamblers and the ISPs and really only penalized the operators. Again, it failed to pass for various reasons. So, a couple of years later Kyl again had his paws on a rejuvenated version of the bill introduced by Congressman Jim Leach, who decided it may be easier to pass the bill if they went after the funders of online gambling rather than the offshore operators. The logic made sense since the U.S. government may be able to police Citibank more than it can an operation in Antigua. So, Leach introduced the Internet Gambling Funding Prohibition Act, which aimed to make it illegal to use banks to fund Internet gambling.

In the meantime, while all these bills were being introduced, Attorney General Janet Reno issued arrest warrants against 14 offshore gambling operators who were providing either online or phone betting operations to U.S. citizens. These included companies like WWTS, SBG Global and WSEX. It was widely known that Kyl approached Reno and asked her to issue the arrest warrants, which she carried out prior to the end of Bill Clinton’s mandate.

Success via the Safe Port Act

Version after version of the Internet Gambling Prohibition Act failed to get the support necessary to pass, but Kyl, along with Bob Goodlatte, Jim Leach and Bill Frist were determined to introduce it somehow prior to the end of George W. Bush’s second term in office. So, in 2006 Bill Frist attached the Unlawful Internet Gambling Enforcement Act (UIGEA) to the Safe Port bill, a can’t miss bill aimed at protecting U.S. borders. The UIGEA was effectively a combination of the Internet Gambling Prohibition Act and Jim Leach’s bill. The Safe Port act passed and because of the attachment the UIGEA became law too. Several analysts at the time indicated that Kyl was one of the principals who encouraged Frist to attach the bill. Once the UIGEA became law, it killed the offshore industry.

Many excellent gambling companies were forced to shut down and most banks stopped allowing credit cards or bank cards to be used for gambling transactions. It also pretty much killed any chance of legalized online gambling stateside until the DoJ, under the Obama regime, gave its opinion that the Wire Act only applied to sports betting, thereby paving the way for states to introduce online gambling. The UIGEA also had a carve out for fantasy sports, leading to the formation of daily fantasy sports, which has become a popular form of gambling in many states.

Kyl more or less disappeared from the scene until 2012 when he teamed up with Senator Harry Reid from Nevada to introduce the The Internet Gambling Prohibition, Poker Consumer Protection and Strengthening UIGEA Act of 2012, which aimed to legalize online poker with the proviso that any company that operated after the passing of the UIGEA (namely PokerStars) be given a five-year exclusion from getting a license and that any site that wasn’t currently operating would have to wait 15 months to get a license. While some saw this as a change of heart by Kyl towards gambling, it was clear that the motivation for Kyl and Reid (who was an original co-sponsor of the Internet Gambling Prohibition Act) was to allow casinos like Caesars, MGM and Sands to offer online poker and, with the head start, effectively shut out PokerStars. More importantly, it gave them time to construct a new way to overturn the DoJ opinion and ban online gambling.

It was around this time that Sheldon Adelson, a very close friend and supporter of both Kyl and Reid, introduced RAWA to try and reverse the DoJ opinion and ban all forms of online gambling. And the politicians Adelson recruited to support RAWA were all somehow connected to the passage of the UIGEA. Of course, RAWA has never gone anywhere and Kyl retired from politics the next year.

Kyl Returns to the Senate

So that brings us to the announcement last week that John Kyl has taken the seat vacated by the death of John McCain and the implications it has for gambling. Many gambling websites are suggesting that Kyl will now be instrumental in trying to get the recent SCOTUS decision to allow sports betting overturned, but that is unlikely. Sports betting and poker were never Kyl’s concern and certainly aren’t the concern of Sheldon Adelson. For both of them, the main concern has always been for online casino gambling and protecting the real money maker at land-based casinos and that is casino games. Sports betting accounts for very little of a casino’s revenue and poker is so small that very few casinos in Las Vegas even offer it any more. What Kyl and Adelson want to stop are online casino games like blackjack, roulette, craps and most importantly slots. In New Jersey poker and sports betting has had minimal impact but online casino companies like Golden Nugget and Tropicana are thriving and growing. Consequently, the concern is that Kyl may somehow use his influence to once again get RAWA heard by the Senate and House and overturned prior to the end of Trump’s current term. I spoke to a couple of analysts who indicated ways this could be possible. One analyst described it this way:

"One thing we have learned about Donald Trump is that he can easily be swayed if he believes it will save him politically. Without question Trump is concerned about impeachment proceedings if the GOP loses either the House or Senate and he is more concerned about some of his own party turning against him if the seats in the House become too close. This is where Kyl could play a big role. Kyl is very respected among his peers in Congress and he can provide a quid pro quo for his pet cause. In better words he could turn to Trump or his staffers and say something like “so and so is leaning towards voting for impeachment and they will be the deciding vote. I can get them to change their mind. I’m willing to get him or her to change their vote but in return I want you to back a law to repeal the DoJ opinion and make online gambling illegal again. As well Kyl could says that he himself will support Trump and vote for Trumps causes only if he is willing to make online gambling illegal again. And Kyl is a very smooth talker. If anyone could sell Trump a Volkswagen and make it sound like he’s getting a Ferrari, it’s Kyl."

Another analyst said that Kyl could play a real role if Trump was indeed impeached:

"I don’t see Trump supporting any bill to change existing online gambling laws. He is a gambler and made his money from casinos. He said in the past that the U.S. should be offering online gambling and I have no doubt he was behind SCOTUS’ recent decision to hear New Jersey’s appeal to PASPA. But if Trump is impeached then Mike Pence will become the new President, and no one is more fundamentalist than Pence. I have little doubt that if Pence gets in power, the religious groups, as well as the anti-gambling zealots like Kyl, Chaffetz and Lindsay Graham will be all over Pence to get the DoJ opinion reversed and unlike Trump, I believe Adelson and the others may have enough clout to get Pence to seriously make a bid to end online gambling."

So Kyl is back and that is a bad thing for gamblers. It is unlikely that Kyl will do anything to try and get the recent sports betting decision overturned, but he may try and do what he can to get online gambling repealed again. It’s not likely he can do it in the next two years. But, if Pence becomes President and if, heaven forbid, the GOP win the next election and Kyl decides to seek another term as Senator in a Pence presidency, it could be a huge blow for gamblers in the U.S.