Virtual currency, like bitcoin, is gaining mainstream acceptance, but New Yorkers still find it hard to buy, sell and convert the currency due to regulations that many bitcoin exchanges refuse to comply with.

For the last few years, American bettors have been excited about the opportunity to bet with Bitcoin. While there have always been bitcoin-only betting sites, it has only been in the last 3 years that mainstream gambling sites have adopted bitcoin as a payment option. Bettors deposit with bitcoin and withdraw with bitcoin. It's fast, easy and the hassle involved in getting real dollar payments to and from websites like 5Dimes, Bookmaker and Heritage Sports were lifted. The anonymity and immediacy of bitcoin payments ensured that Americans could bet at their favorite sites without fear of payments being declined by their banks, flagged by authorities or held indefinitely as websites tried to find payment processors. However, one state where customers are being frustrated is New York.

In 2014 New York announced that it was going to try and regulate virtual currency payments and last year the state initiated rules that required companies to obtain a 'bitlicense' in order to process payments for New York residents. Last year the rules for the bitlicense was released as dpsp200t and the requirements to obtain the license were extensive. Along with a $5,000 application fee, there are rules in place requiring companies to hire a compliance officer, rules that require an extensive personal analysis of all individuals that will run the bitcoin operation, rules relating to anti-fraud and money laundering, a requirement that mandates keeping a full list of all transactions, a requirement that mandates companies ensure the transactions are legal per federal and state laws (something which the bitcoin industry insists is impossible), a requirement to report suspicious activities and, most importantly, a requirement to keep a listing of all customer's personal information. 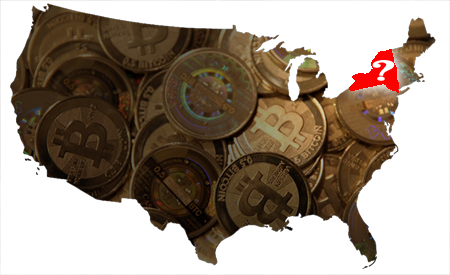 Needless to say, the bitcoin processors weren't impressed by the regulations as they insist the main reason to obtain bitcoins is anonymity, and thus most bitcoin processors announced that they will not abide by the rules of the license and withdrew their services from New York. Included were stalwarts like Kraken, Bitquick, Bitfinex, Localbitcoins.com, among others. In fact, the companies even created a website called pleaseprotectconsumers.org which gives the reasoning why they have decided not to abide by the rules and have exited New York state. According to the website:

"This service is censored in New York State due to regulations which mandate the extraction of your personal, private information. This jeopardizes your safety, so we refuse to do it."

Pleaseprotectconsumers.org goes on to talk about the concerns regarding identity theft and argues that with blockchain technology there's absolutely no reason to store personal data, but the rules of a bitlicense require it, which many bitcoin processors won't do. No doubt the licensing fee is a deterrent as well. The site contains is a list of companies that have blocked bitcoin transactions in New York, although it appears the list is not comprehensive, since Coinbase won't accept New York transactions either and they aren't on the list.

To date 25 companies have applied for a bitlicense. Only 2 were granted, one to Circle Financial and one to itbit. Four companies have been denied a license, 4 have withdrawn and the others are pending. And ono December 7th Circle Financial announced it will no longer allow customers to buy and sell the digital currency. Other states including Washington and North Carolina have also licensed virtual currency processors but the rules are not as stringent and the process has been much quicker. Other states are also looking at ways to license virtual currency processors.

Despite the difficulty of getting bitcoins in New York there are still ways for people to obtain them. The most preferred is for New York residents to download a bitcoin wallet from one of many sites that offer it to NY residents and then fund the wallet at a Bitcoin ATM which are scattered throughout New York State. The full list of ATMs is listed at coinatmradar.com. These ATMs avoid sites like Kraken or Coinbase so there is no concern for payments being scrutinized or declined. And transferring to sportsbooks or casinos via the links on the sites avoids the issue as well.

Another option is to buy bitcoins from coincafe.com if the person is in New York City. While people can still use coincafe in other jurisdictions payments can be made in person at the coincafe in The Big Apple and the fees are lower than most traditional payment processors like Kraken.

Another option is for New Yorkers to use itbit which is the sole company that has a bitlicense. Bettors should be aware though that all their information will be recorded and stored per the bitlicense, and there is always a possibility their transactions to offshore gambling sites could be flagged. As well itbit generally requires larger bitcoin purchases.

The last option is for the New Yorker to fund a wallet in another state or have someone fund their existing wallet. Right now, only New York is off limits and sites like Kraken block people based on IP addresses. But there's nothing stopping a New York resident from accessing an IP in New Jersey and funding the account in that state. And because transactions are anonymous there's no way anyone in the bitcoin industry can identify the true residency of any transaction once it's made.

With the price of bitcoin at an all time high and it acceptance growing every day, New York, the financial capital of the United States, will certainly have to allow more licenses and perhaps rewrite the existing regulations to attract and keep business. This would be good news for the virtual currency industry, traders and bettors.