A look at the ramifications of an upcoming court battle against betting giant Bet365, which has refused to pay a winning horse bettor.

A look at the rule Bet365 is using to avoid paying a winning player.

Recently the Telegraph printed an article about a 20-year-old student who is taking Bet365 to court for refusing to pay out a winning bet.

According to the article, Megan McCann, an Irish citizen, placed a series of horse racing bets totalling almost 25,000 British pounds ($32,00 USD) and won over 1 million pounds (1.3 million USD). The day after she won, McCann, who was 19 at the time, went on chat with Bet365 and made a request for a withdrawal. The customer support person congratulated her, acknowledged the win and said she would be paid (Bet365 does not have withdrawal limits). The next day the company called her and asked several questions, likely to confirm her identity and once they were satisfied with her answers they told her the withdrawal would be processed within 48 hours. It never materialized. Bet365 delayed the payment and eventually closed her account and said they would not honor the bet accusing her of fraud. The company also refused to return the nearly 25,000 pounds she staked. Consequently, McCann has hired lawyers and is taking the company to the Belfast High Court to try and get her winnings. 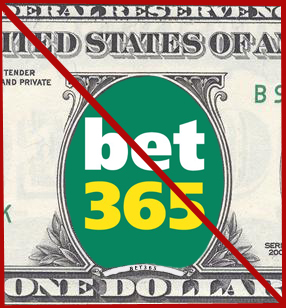 It appears that at some point while investigating the win Bet365 determined that McCann either did not put up all the money herself for the bet or she was betting on behalf of others. In any case, Bet365 said that violates their rules and told her she would not be paid and moreover she would not even get back the almost 25,000 pounds she staked! The rule Bet365 is referring to is in section 4 of their terms and conditions under the category Suspension and Closure:

4.2 (c) bet365 considers that you have used the Website in an unfair manner, have deliberately cheated or taken unfair advantage of bet365 or any of its customers or if your account is being used for the benefit of a third party;

McCann's lawyers have argued that the rule is buried under terms and conditions and is "too lengthy, too complex and much too vague for the average customer to understand." The lawyers for Bet365 however insist that the rule is clear and she violated it. It has also been suggested that this is a standard rule in the industry and should be well known.

I decided to check the terms and conditions a various gambling sites based in Europe, the Caribbean and Kahnawake to see if that is indeed a standard rule and couldn't find anything. William Hill has a rule that talks about it being illegal to use third party software to place bets but nothing about placing bets for more than the account holder. A couple of other sites indicate that the customer must adhere to the KYC (know your customer) rules, which include providing information to verify the location and true identity of the account holder, but again I could find nothing like the rule from Bet365 that specifically makes it illegal to bet for a third party.
The lawyers for McCann argue that the rule is ridiculous because it could effectively make it illegal for a person to bet on behalf of their spouse, which of course is very common as households often share accounts, and moreover that the rule is a "heads you lose, tails you lose" scenario since the company won't even return the initial stake.

I talked to a few people working in the gambling industry and received some responses as to whether they have a similar rule (whether explicit or not) in their regulations and more importantly whether they agree with it. Scott, the Sports Director at thegreek.com indicated he didn't:

"We don't have a rule like that and I would not want a rule like that. It's too hard to be fair when trying to enforce. It's akin to the messenger betting rule Vegas used to have but a year or so ago they amended that rule if you list all persons involved in the syndicate."

The chief bookmaker at another Caribbean based company, who asked that his name not be used, stated something similar but was also critical of Bet365 for accepting the bet and then cancelling the win after the fact:

"We know syndicates bet with us and we encourage it. We are comfortable with our lines so it doesn't matter if they bet as a group or by themselves. And if a person is wagering for a significant other, a friend or even their boss we wouldn't know nor would we care. If the person doesn't try and circumvent the limits and agrees to receive the payment themselves it's not an issue. We also never cancel bets unless there is a good reason. If we inadvertently list a team as a 20/1 underdog when it should be 2/1 of course we will cancel the bet. Our linemakers are only human and errors posting the lines on the website happen. But we also never cancel a bet after the event has started. If we must void a bet due to an obvious error in the line we will always inform the customer and offer them the ability to place the bet again at the true odds plus a small percentage. I know this is different, but the bet was taken and the person should be paid."

One Malta based company while not providing me with an answer to the question of whether they agree with the decision pointed me to a paragraph that is part of the UK Gambling Commission (the regulator that Bet365 falls under) guidelines relating third party betting. It falls under the section titled "do you know who is making payments into your customer accounts?"

If you allow, or do not actively prevent, payments to accounts by third parties, you must ensure that your anti-money laundering (AML) and social responsibility (SR) obligations are met in relation to both the account-holder and any individuals funding the account.

This means that know your customer (KYC) requirements apply equally to the person who holds an account with you and any individuals funding that account.

You should be transparent with your customers regarding your policies in this area. You must make it clear to players how you will treat an account where you find out it was funded by a third party. For example, if you identified that the third party that funded the account was self-excluded with you.

You should ensure that you meet your AML and SR obligations whilst also ensuring your application of terms and conditions is fair and proportionate.

In any case where we determine that a gambling business has not met their obligations, because they have not managed the risk of third party funding of accounts, we may take regulatory action against the business, the relevant Personal Management Licence holders, or both.

Nevertheless, according to the Telegraph article, it appears that the UK Gambling Commission may feel Bet365 has gone too far with this interpretation. The article states that Sarah Harrison, Gambling Commission's chief executive, has said: "Gambling operators must treat customers fairly – but some have been relying on terms that are unclear with too many strings attached."

"A ruling for Bet365 could provide a precedent to allow companies to wiggle out of paying. "

People posting at gambling forums in the UK have been mostly sympathetic to McCann but others are left wondering if maybe the people McCann was betting for are indeed eligible to wager. One poster noted that the 'Lucky 13' bet she made was such a high risk, low reward, bet that it's quite conceivable the people who put up the money were criminals just looking for a way to launder their ill-gotten gains and likely only hoped to get their money back or a small profit to conceal the true sources of the funds. Of course, that's just speculation but it does indeed reflect directly on the UKGC guidelines that says the company must know everyone who put up the funds, and that answer will only be known when McCann provides the names of the people who gave her the funds for the bet.

This isn't the first time Bet365 has been accused of not paying winners and seriously cutting limits on bettors who win and an article in the Guardian last year stated that bookmakers were closing the account of winning horse players in droves. A punters group suggested that 20,000 accounts of winning British horse players were closed in 6 months.

Consequently, there are quite a few analysts who are wondering if the real issue is that bookmakers are doing a poor job in the UK at setting odds and they're simply looking for a scapegoat to justify why they are constantly being beaten on the sport. In North America, of course, this isn't an issue since all horse racing bets are pari-mutuel.

The outcome of this case is being watched closely by gambling companies and bettors alike. Many gambling companies believe a ruling against Bet365 would be a major concern since it could set a precedent to invalidate their terms and conditions section of the websites, and for bettors there is a concern that a ruling for Bet365 could provide a precedent to allow companies to wiggle out of paying large winnings, simply by suggesting they believe there were others involved in the wagers. Since the decision is going to be decided in the high courts of the country where many large operators, including Bet365 and Paddy Power-Betfair are situated, the ruling will be viewed as significant.

OSGA will continue to follow the case closely and will provide an update once the Belfast High court has ruled.