The 17th year for the OSGA NCAA Basketball Challenge went down to the wire with â€˜Harnparâ€™ taking the grand prize of $250 cash.

The 17th Annual OSGA NCAA Tourney Bracket Challenge came down to a handful of players vying for up to $500 bucks. Only three contestants picked Michigan to be crowned Champion and two of those were so far off the point total they would still not have hit the board with a Wolverine win. Ultimately, Villanova prevailed, giving hope to the 50 players who took them to win it all. However, â€˜Harnparâ€™ edged out â€˜Unigalaxâ€™ by just 1 point and picked the Villanova Wildcats as Champions, claiming the Grand Prize in the 2018 OSGA NCAA Tournament Contest.

Unfortunately for â€˜Harnparâ€™, he was not an OSGA member prior to the start of the contest and thus his 139 point win total only qualifies for a grand prize of $250.â€™Unigalaxâ€™ will receive the 2nd place prize of a $125 and â€˜justlikestealingâ€™ did just that to grab a $100 prize with 131 points. In the first year that we have not had any ties in the point totals at the top of the leader board, â€˜Montewinnsâ€™ finished 4th with 127 points and â€˜freakâ€™ grabbed the 5th place prize of $50 with 125 points. 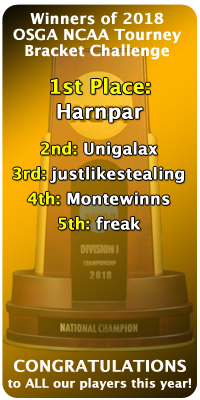 Contestants were awarded points in the bracket style contest and many were still alive going into the last weekend of the tourney, as the Final Four winners yielded 16 points and the tourney champion 32. The most points that could be accumulated were 192. â€˜Harnparâ€™ finished with the lowest point total in three years. Last yearâ€™s winner had 147 points while previous winners had over 152 total points. The contest was a wild ride for many players who saw crazy swings in the standings each week due to the stunning upsets of Virginia, Michigan State, Xavier and West Virginia in the early rounds. Ultimately, the three top finishers all had Michigan and Villanova in the final game. To view the complete standings click here.

â€œOnce UMBC won as a 16 seed and Sister Jean got it cranked up for Loyola-Chicago, we figured that as little as 110 points would have been enough to win it all,â€ said OSGA President Jim Quinn. â€œI personally picked the worst bracket in our 17 years of running the Bracket Challenge,” added Quinn who finished with just 40 points in 163rd place.

Players should check back often for more free contests and we urge players to enroll in our annual football contests come September. Remember Members get double prizes in most OSGA Contests, so become an OSGA VIP Insider today! In 2018, OSGA is committed to offering more contests, with more great prizes for all members, fans, friends and visitors.