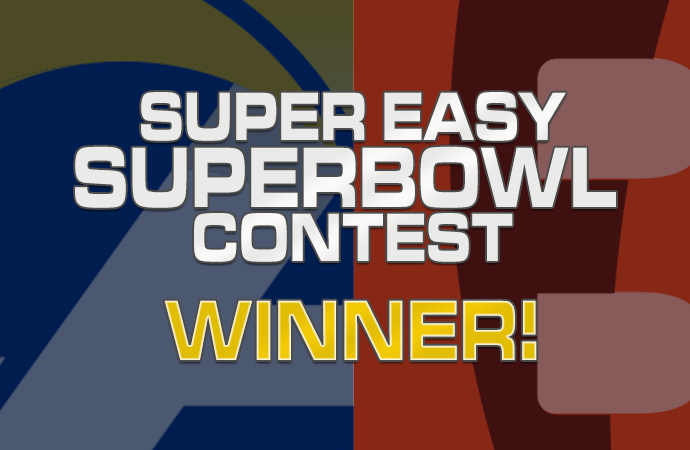 Congratulations go out to OSGA Member ‘JBoy’ for his incredible picks for SBLVI.

Super Bowl LVI is in the books and so is the 8th year for the OSGA Super Easy, Super Bowl contest. The Rams 4th quarter come-from-behind victory sealed the deal for one OSGA member, as ‘JBoy‘ was able to pick 7 of the eight prop bets correctly and had the Bengals covering the 4.5 point spread for SBLVI.

Congratulations go out to ‘JBoy’ for his terrific job of making prop picks for the Big Game and for his selection of the Bengals to cover. ‘JBoy’ cashed in with the winning prize of $250 for his efforts!

JBoy’ actually tied with ‘Bill‘, who also picked 7 prop bets correctly. But, ‘Bill’ has the Rams to cover the spread, while ‘JBoy’ took the Bengals and the prize money.

At OSGA we try to make our annual Super Bowl Contest easy, but this year increased the number of picks to be crowned the winner. Players had to pick 8 prop bets, up from 6, and the winner of Super Bowl LVI against the spread. Players also had to pick the total of the Big Game for the tie-breaker and a shot at an extra prize.

This year the Super Easy, Super Bowl contest paid out a whopping $500 for any players who could correctly pick all 8 prop bets. Two of the selections really sunk players’ chances. The big one, picked by over 80% of contest participants, was Jamarr Chase to have over 5.5 receptions. He finished with 5 and sunk many tickets. There were also many picks for the first score, more than half of participants chose Field Goal and Matthew Stafford’s first quarter pass to OBJ sank even more players chances.

Still, four players were able to pick six of the prop bets correctly and the consolation prize gave these players an extra month of OSGA membership for going six for 8. The final prize was $50 for any player who picked the exact total for SBLVI. ‘Dean’ chose 43 and was rewarded with the payout when the Rams closed out the game with a TD and a final score of 23-20.

So, another year of NFL is completed. And OSGA Members cashed in throughout the season. Now, all eyes are turned towards March and the return of the OSGA NCAA Tournament Challenge, where OSGA will be vying for double prizes throughout the tourney.