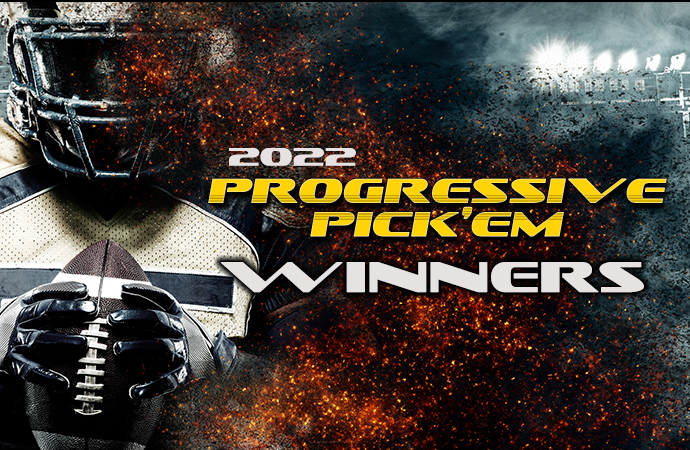 We are happy to announce the winners of the 2022 OSGA Progressive Pick ‘Em!

The 17th year for the OSGA NFL Progressive Pick ‘Em saw the jackpot grow to the maxiumum of $1800 because, over the entire season, no player managed to get a perfect card. The weekly prize winners did cash in often, with 19 sportsbook prizes handed out over 18 weeks, and the final leaderboard saw just a 300 points separating first place from 7th.

this was a wild and wacky NFL season, with huge upsets that ruined most Survivor Pools in the first three weeks of the season. And it continued. Tom Brady and the Bucs were terrible for most of the year, the defending Super Bowl champs looked like they were in tank mode and teams like Seattle and Jacksonville were surprisingly unpredictable. This cause the weekly contest prize that builds at $100 per week for a perfect card to neve be hit! Still, many weeks came down to the tie-breaker and it took over 19,000 points to win the Grand Prize. 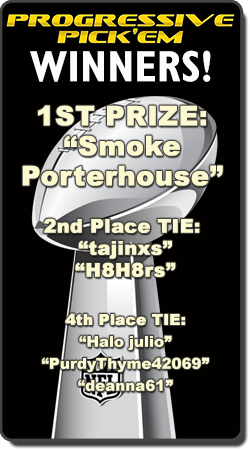 Congratulations to “Smoke Porterhouse” who averaged more than 10 wins a week for the entire season to win the 2022 OSGA Progressive Pick ‘Em, despite never capturing the weekly prize! Adding in the extra points awarded for a correct Monday Night Football pick and “Smoke Porterhouse” amassed 19,100 points, shockingly the same total as the winner last year! This year’s pool was again guaranteed and after a big win last year, we had hoped to see something similar in 2022. But even in the last week of the NFL season, there were big upsets crushing many players chances of the big payout. Though “Smoke” was sweating it out, he cashed for 50% of the final pool money – $900.

The first five places at the end of the season are all winners in the OSGA Progressive Pick â€˜Em and after more than 500 games, just 300 points separated all of the prize recipients. Long-time OSGA contest participants “H8H8rs” and “tajinxs” tied for runner-up, just 200 points off the leader with 18,900 points. This year we reverted back to paying winners who tie by splitting prizes. So “H8H8rs” and “tajinxs” a split the 2nd and third places prizes totaling $680.

Fourth place also tied and “Halo julio”, “PurdyThyme42069” and “deanna61” has strong showings all season long, and each ended the 2022 season with 18,800 points, missing bigger money by just one, 100-point pick. They will split the fourth and 5th place prizes to get $90 apiece.

Let us know in the comments below whether you think we should continue to split prizes, thus rewarding more players, or use a tie-breaker involving most correct picks for the season to determine prizes.

We would like to thank all the players and sponsors in the 17th annual OSGA Progressive Pick ’em. Sponsors included Jazz Sports, BetAnySports and BetUS, with BetUS ponying up double prizes in the week where there was an exact tie between players. These sportsbooks offered varying weekly prizes, from free plays and free cash and made good on over $1000 worth of no-deposit, free bets.