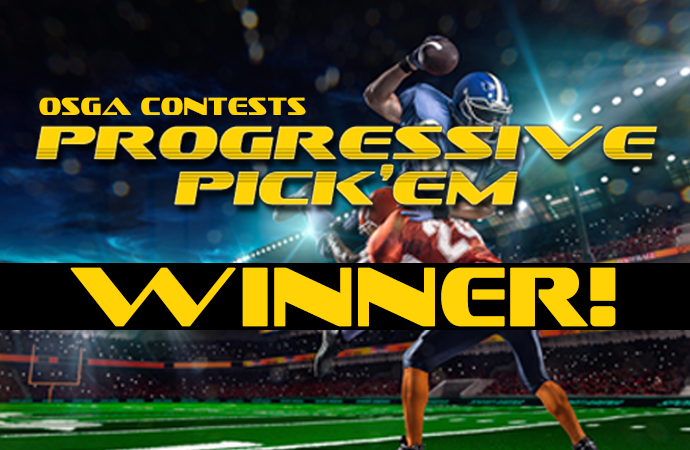 The 2021 OSGA Progressive Pick ‘Em was hit in Week 17, giving one player the largest payout ever in an OSGA contest.

It took 17 weeks, but finally a player in the 2021 OSGA Progressive Pick ‘Em contest picked all the NFL games on the board correctly and cashed the entire, season-long, progressive jackpot of $1700!

Long time OSGA member and contest player ‘djobie’ was able to correctly pick all 16 games in Week 17 of the NFL season to cash in on the largest prize ever paid out to one player by OSGA in 20 years of running contests, $1700! ‘djobie’ has been on a roll in the last few years playing the contests at OSGA.com. He won the weekly prize in Week 15, was the runner-up in last year’s Progressive Pick ‘Em, cashed the Week 16 prize last year and was the runner-up in our March Madness contest back in 2019. 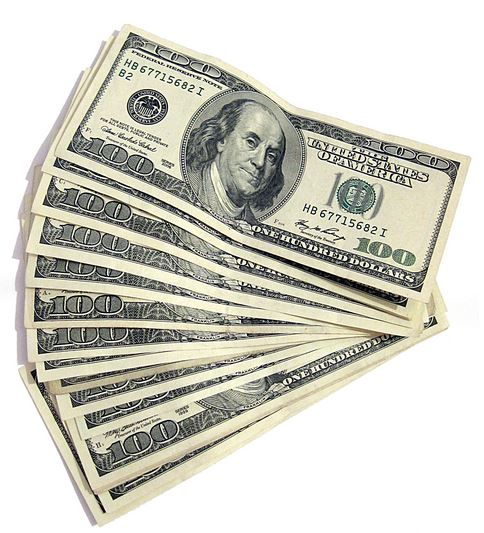 Back in Week 14 one player had a shot at cashing the Progressive pool, then $1400, but his MNF pick lost and prize pot continued to grow. This week saw two players head into the Monday Night Football game between the Steelers and Browns with a shot at big money. ‘Sir Jazzkey’ had 15 correct picks and chose the Browns, while ‘djobie’ took the Steelers. The week started with the Browns as a three point favorite, but unfortunately for the Browns and ‘Sir Jazzkey’, the Chargers win on Sunday eliminated Cleveland from the playoffs and thus some motivation for the MNF division rivalry against the Steelers. Pittsburgh was up 10-0 at the half, but the Browns gave “Sir Jazzkey’ hope in the 2nd half following a 1-yard touchdown pass to Harrison Bryant with 1:10 to go and the score 19-14. But Pittsburgh recovered the ensuing onside kick-off and Najee Harris streaked for a 37-yard touchdown run in the final minute putting the game out of reach, giving Cleveland another losing season and ‘djobie’ the Progressive prize.

The OSGA Progressive Pick â€˜Em is again the featured Free NFL contest on OSGA.com, with over 135 participants and thousands in cash and prizes up for grabs. Each week players pick all of the NFL games on the board straight up, with no point spread. Both a season-long contest and a weekly contest, the progressive aspect of the contest rewards players who can pick all of the games on the board correctly, straight-up, with no point spreads. The weekly prizes change from free bets to use at BetUS and Wagerweb to a free parlay at BetPop. In addition, each week the progressive pool builds by $100, so in Week 17, the prize to sweep the board was $1700. According to the contest rules, â€˜djobieâ€™ will get a $1700 cash prize.

The last time the OSGA Progressive Pick ‘Em went this deep into the season was back in 2015, when no one cashed and the weekly prize pot grew until the final gun sounded on the final game of the NFL season. “We thought that this would be another year where no one hit the pool all season long,” said Jim Quinn, head man at OSGA. “But, we are happy to see a member and long time fan of what we do here cash in on the biggest prize we have ever paid out!”

Congratulations again to â€˜djobieâ€™ for a huge effort in Week 17 of the NFL season. The Progressive Pool resets again to $100 and next week we will crown the overall winner. In previous years, if the contest was hit late in the season, the progressive pool would reset and the overall season-long winner would get a piece of the reset pool. But luckily for players, this year OSGA featured a guaranteed pool for the cumulative winners. Even if a player wins in week 18 (or week 17!), this year’s contest features a guaranteed final prize pool of $1025, with $500 going to the winner. With just one week to go, ‘archman1’ and ‘kland1969’ are tied with 18,200 points. ‘punter711’ is in 3rd place and ‘djobie’ is hanging around in 4th.

Good Luck in the final week to all of the players in the 2021 OSGA Progressive Pick ‘Em contest. With just 200 points separating first from 6th place, 10 players within 500 points and plenty of cash still up for grabs, plus the reset $100 Progressive Pool should a player get all the games correct again, the time is now to pick those final games!