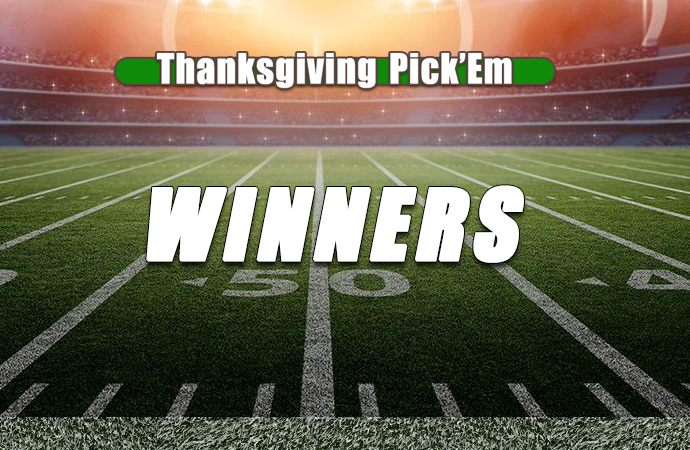 OSGA is happy to announce ‘archman1’ as the winner of the 2021 OSGA Thanksgiving Pick â€˜Em!

The Thanksgiving weekend provided more than just turkey and stuffing, it was also the weekend for the 2021 OSGA Thanksgiving Pick â€˜Em. We are happy to announce the winners for this awesome weekend football pick ’em.

In a field of nearly 100 players, one player came out on top as the clear cut winner. Congratulations to ‘archman1’, who picked 14 out of the 16 games on the board correctly to take sole possession of the top of the leader board. For this incredible effort, ‘archman1’ wins $250 in cash and a $250 free play from top online sportsbook, BetAnySports.

The 2021 OSGA Thanksgiving Pick â€˜Em was a simple contest that gave everyone a chance to cash in. Players were asked to pick 16 games straight up, with no point spreads. It all started with the three NFL games and the college game on Thanksgiving, featured almost every game on the board on Black Friday and ended up with three of the NCAA Rivalry games on Saturday.

Because of the ease of picking games without any point spreads, OSGA figured upsets would come into play over the course of 16 games. But they were few and far between over the weekend and thus six players were right behind ‘archman1’ with 13 correct selections. So, it came down to the tie-breaker, the total final score for the Iron Bowl, between Alabama and Aubrun. The game ended with ‘Bama escaping with 4-OT victory, 24-22. The game total closed at 46, but regulation ended with the teams deadlocked at 10-10 and every player in the contest went over the final total.

The Runner-up in the OSGA Thanksgiving Pick â€˜Em had a total of 51 points, just edging out other opponents. Congrats go out to ‘titusott’ who picked 13 games correctly and was closest to the total of the Iron Bowl. He gets $150 cash, plus a $150 Free Play at BetAnySports.eu. The 3rd place finisher was ‘tammyb1’, with a tie-breaker of 52. She wins $100 cash, plus a $100 in sports betting money at BetAnySports.

The 4th and fifth places in the 2021 OSGA Thanksgiving Pick â€˜Em did not receive a sports betting prize, but still were able to cash in with 13 correct picks. ‘deanna’ used a total of 54 points to finish in 4th and ‘Jawzbreaker13’ had 55 to finish in 5th. They receive $50 and $25 respectively for their efforts. Check out the ifnal leaderboard here.

OSGA Members were also eligible for even bigger prizes. OSGA VIP Members were able to receive a double cash prize, if they finished in the top 5! Unfortunately, the member who came closest to the top of the leaderboard was able to make 13 correct picks, but finished in 7th place.

Stay tuned for the OSGA College Bowl Contest. we are just weeks away from Bowl season and OSGA is sure to have another great contest, loaded with cash and sports betting prizes and with extra benefits for Members!