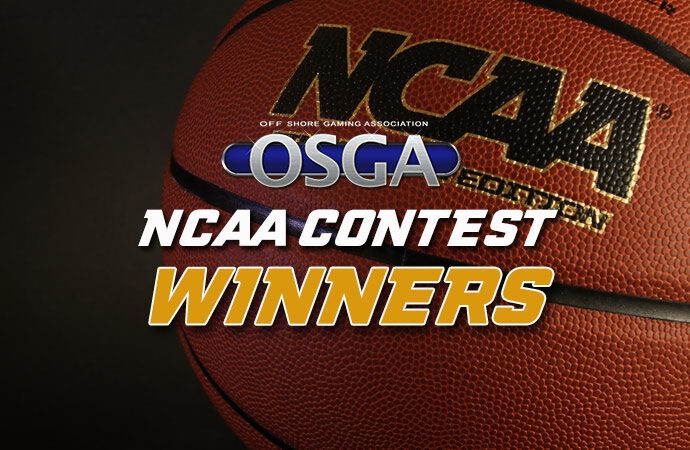 We are happy to announce sheilaE as the winner of the 2022 OSGA NCAA Bracket Challenge!

Another exciting March of upsets, buzzers beaters and Cinderellas has ended and so has the 20th annual OSGA NCAA Bracket Challenge. Over the last 20 years the OSGA NCAA Tournament contest has evolved and gotten huge and this year’s bracket challenge featured a $10K perfect bracket prize, a Sweet 16 sports betting prize from sportsbook leader BetAnySports and extra prizes just for OSGA Members.

We are happy to announce “shielaE” as the winner of the 2022 OSGA NCAA Bracket Challenge! ShielaE had Kansas winning the Championship game and that proved to be the deciding factor after three #1 seeds were eliminated before the Final Four. She had the largest winning margin in the last decade by collecting 80 points to cash for a whopping $500 cash prize!

“Chicoraro78” was leading throughout much of the tourney, firing 45 correct picks, including an astonishing 27 first round winners! But with no teams in the Final Four, he ends up in second place overall with 69 points, good for a $250 prize. Unfortunately, no OSGA VIP Members finished in the top two spots on the leaderboard, so no extra prizes were awarded to Members!

In any tourney bracket contest, they key to winning is simply having the team that hoists the trophy and cuts down the nets, as the winner is worth 10 points, as are the two combined Final Four games. The comeback by Kansas in the 2nd half sealed the deal for everyone who cashed for a prize and saw many players leapfrog the field to the front of the leaderboard, as three of the top 5 finishers had the Jayhawks to win it all.

“annak” was one of those players. She came from way down the leaderboard to wind up in third place with 67 points, despite picking just 35 tourney games correctly. She’ll collect $150 cash for her outstanding effort, cashing for the second time in a contest at OSGA. Way to go annak!

Rounding out the prize winners is “kevint“, another constant player of contests here at OSGA.com. Oddly, he had the same amount of correct picks as the tourney winner, but as the games were worth more and more points, he faltered to wind up in 4th place with 66 points. Kevint will still get a $100 cash prize, as he edged out “Halo Julio“, the only player to end up in the top 5 with Kansas as the correct winner without cashing a prize.

What a great year for the contest and the NCAA Tournament overall! Finally getting to watch the excitement of the players, experience the nail biting finishes with fans in the stands and calculating how our brackets were doing was a welcome relief from politics, war and Covid.

Congratulations to everyone who played and to these who cashed in! Head to the OSGA NCAA Bracket Challenge leaderboard to check the standings and see how you fared versus other players. We are going to make our annual Progressive Pick ‘Em the biggest ever, with a huge surprise for players, when NFL football returns in the fall.

Become a member today to get in on the members’ only extra prize offerings for our annual NFL Progressive Pick ‘Em.