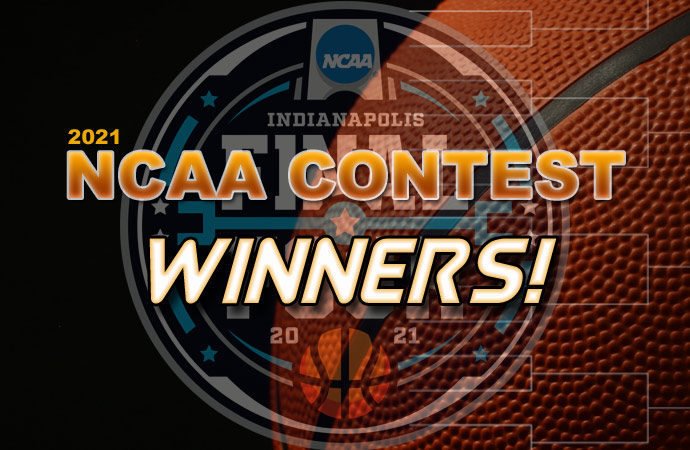 Robjd3 outlasts the entire field in the OSGA NCAA Bracket Challenge to cash the $500 top prize!

Another exciting March of upsets, buzzers beaters and Cinderellas has ended and so has the 19th annual OSGA NCAA Bracket Challenge. This year’s bracket challenge featured updated software, a $10K perfect bracket prize and a leaderboard just for OSGA Members. 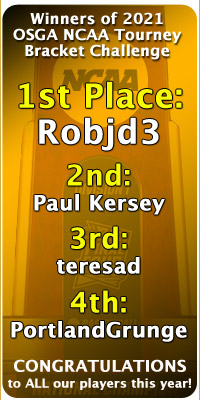 We are happy to announce “Robjd3” as the winner of the 2021 OSGA NCAA Bracket Challenge! Robjd3 had 39 correct picks throughout the contest and had both Gonzaga and Baylor in the Championship game, with Baylor as his winner. He edged out long-time OSGA Member “Paul Kersey” by collecting 83 points to cash for a whopping $500 cash prize!

Paul Kersey was in the Top 10 throughout the entire tourney, firing 41 correct picks, including 24 first round winners! He ends up in second place overall with 80 points, good for a $250 prize. But Kersey is also an OSGA VIP Member and was at the top of the Members Only leaderboard from the first round. He was the only member to take Baylor as the tourney winner and cashes the OSGA Member prize for $250, PLUS the 2nd place prize, for a huge $500 payout!

In any tourney bracket contest, they key to winning is simply having the team that hoists the trophy and cuts down the nets, as the winner is worth a whopping 32 points. Balyor’s blowout of Gonzaga sealed the deal for everyone who cashed for a prize and saw many players leapfrog the field to the front of the leaderboard, as six of the top 7 finishers had the Bears to win it all.

“teresad” was one of those players. She came from way down the leaderboard to wind up tied for second with 80 points. However, Paul Kersey had the total for the NCAA Championship game at 158, while teresad has 138. With a final score of 86-70, the tie breaker went to Kersey, landing teresad in 3rd place. She’ll collect cash for her outstanding effort for the second contest in a row; teresad finished 4th in 2019. Way to go teresad!

Rounding out the prize winners is “PortlandGrunge“, another constant player of contests here at OSGA.com. Oddly, he had the most correct picks in the first round out of the more than 150 players! But as the games were worth more and more points, he faltered to wind up in 4th place with 78 points. PortlandGrunge will still get a $100 cash prize, as he edged out “BtownRat” and the only player to end up in the top 10 without having the correct winner, longtime OSGA member and contest participant “Bimmercando“.

What a great year for the contest and the NCAA Tournament overall! After two years, getting to watch the excitement of the players, experience the nail biting over a wager and calculating how our brackets were doing was a welcome relief from politics, stimulus and vaccine talk.

Congratulations to everyone who played and to these who cashed in! Head to the OSGA NCAA Bracket Challenge leaderboard to check the standings and see how you fared versus other players. We are planning an NBA playoff contest just for members and, of course, our annual Progressive Pick ‘Em when NFL football returns in the fall.

Become a member today to get in on the members’ only NBA Playoff contest and extra prize offerings for our annual NFL Progressive Pick ‘Em.