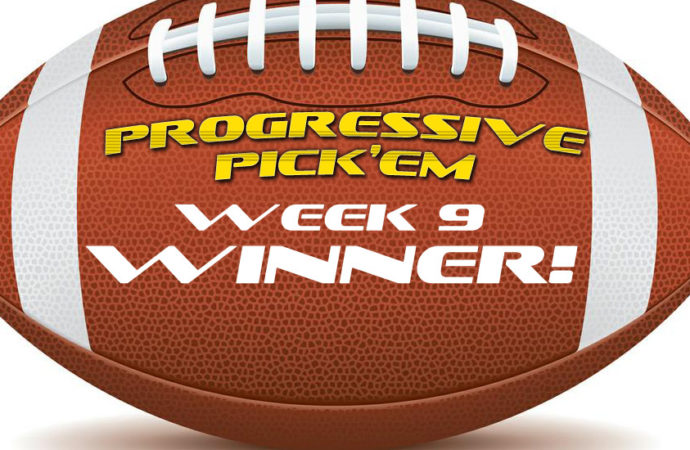 For the first time in 14 years the OSGA Progressive Pick ‘Em is hit in consecutive weeks.

For the second consecutive week, the OSGA Progressive Pick ‘Em has been hit! The OSGA has been running this weekly and season long NFL Pick ‘Em contest for 14 years and this is the first time ever that players have picked all the games on the board correctly two weeks in a row! Congratulations to â€˜Howiethe Horseâ€™, who cashed the Progressive Prize of $100! 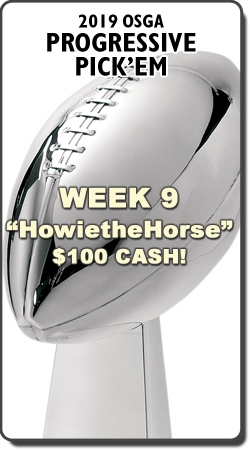 The OSGA Progressive Pick â€˜Em is again the featured Free NFL contest on OSGA.com,with over 150 participants and thousands in cash and prizes up for grabs. Each week players pick all of the NFL games on the board straight up, with no point spread. Both a season-long contest and a weekly contest, the progressive aspect of the contest rewards players who can pick all of the games on the board correctly, straight-up, with no point spreads. Each week the pool builds by $100, but the pool was hit in Week 8, so the prize to sweep the board in week 9 was just $100.

Week 9 of the 2019 NFL season saw many home teams win straight-up. â€˜HowietheHorseâ€™ managed to pick every team correctly that came out on top. If he had missed one game, he still would have won the weekly $200 free play prize from WagerWeb.eu, as the next closest competitor picked just 12 games right. â€˜HowietheHorseâ€™ has been playing in OSGA contests for over a decade and he wasa a weekly winner three years ago! OSGA CEO Jim Quinn said, “It’s awesome to see long-time players win again.”

Howie told us that he picked mostly home teams on a hunch. In fact, he picked Jacksonville thinking they were at home, but Sat night he found out the game was in London, “So I switched to Houston in time”, he told OSGA.

Contest sponsor WagerWeb.eu felt bad that Howie missed cashing for big dollars by one week, so they have offered him the weekly betting prize of a $200 free play, in addition to the $100 cash.

The Progressive Pool starts again this week and will continue to grow until the end of the season. The Progressive prize has only been hit twice in the same season, back in 2012, so we expect the pot to grow for the next 8 weeks. If no one manages to get all the winners on the board picked correctly, the remaining $800 will be split between places one through five at the end of the NFL season. The current leader, â€˜Smoke Porterhouseâ€™ still leads the pack with 92 correct picks but ‘Rewster’ caught him this week and they are tied through 9 weeks. Less than 1000 points separates the 40th player from #1. Itâ€™s still anybodyâ€™s contest.

Head to OSGA.com today and get your picks in for Week 10.